Path and Nike FuelBand Pair Up, Flaunting the Benefits of a Private AP - Mike Isaac - Social. Facebook and Twitter rose to prominence in part because they played so nicely with others. 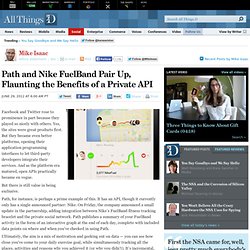 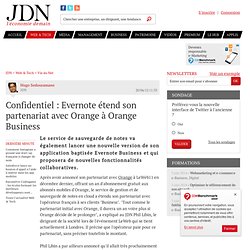 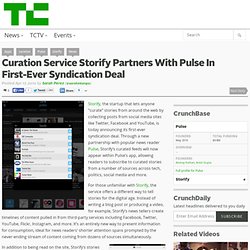 Through a new partnership with popular news reader Pulse, Storify’s curated feeds will now appear within Pulse’s app, allowing readers to subscribe to curated stories from a number of sources across tech, politics, social media and more. For those unfamiliar with Storify, the service offers a different way to tell stories for the digital age. Spotify Has Snagged 4 Million New Users In Six Weeks. GetGlue integrates with Tumblr and creates blog widgets. Upstart Search Engine DuckDuckGo Gets Prominent Placement in Opera Browser. Announcing the Punchfork Recipe API and a Search Partnership with DuckDuckGo. Jul 2011 We’re excited to share two major announcements: , we’re releasing our brand new Recipe API , which allows anyone to integrate recipes into their website or app. , we’ve partnered with search engine DuckDuckGo to provide zero-click recipes directly on search result pages—all powered by the Punchfork API.

If you’ve never tried DuckDuckGo, you’re missing out. It’s super fast, privacy conscious, and it eschews tangential features to focus like a laser on one thing: delivering high-quality, spam-free search results. As longtime users of DuckDuckGo here at Punchfork, our favorite feature is “zero-click” information. In total, there are three ways you can search for recipes on DuckDuckGo: 1. 2. Bigpoint partners with Mail.Ru Group to take its online games to Russia. Bigpoint, the German online gaming outfit, has signed a partnership with Russia’s Mail.Ru Group, which will see the two companies offer select gaming titles on each of their respective portals. 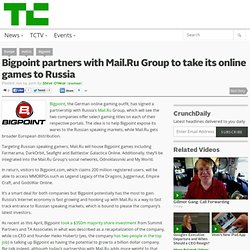 The idea is to help Bigpoint expose its wares to the Russian speaking markets, while Mail.Ru gets broader European distribution. Targeting Russian speaking gamers, Mail.Ru will house Bigpoint games including Farmerama, DarkOrbit, Seafight and Battlestar Galactica Online. Additionally, they’ll be integrated into the Mail.Ru Group’s social networks, Odnoklassniki and My World. Instagram Finally Gets A Better Website — For The Grammys. A Sign Of What’s To Come?

When it comes to Instagram, there are generally two complaints: 1) there’s no Android app yet. 2) the web experience is severely lacking. 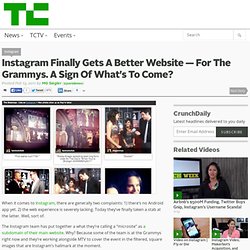 Today they’ve finally taken a stab at the latter. Well, sort of. The Instagram team has put together a what they’re calling a “microsite” as a subdomain of their main website. Why? Because some of the team is at the Grammys right now and they’re working alongside MTV to cover the event in the filtered, square images that are Instagram’s hallmark at the moment. Apple Just Handed Twitter The Keys To The iOS Kingdom — Here’s Twitter’s Take.

When we first broke the news that iOS 5 would come with Twitter integration, I wasn’t thinking big enough. 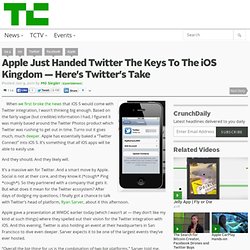 Based on the fairly vague (but credible) information I had, I figured it was mainly based around the Twitter Photos product which Twitter was rushing to get out in time. Turns out it goes much, much deeper. Apple has essentially baked a “Twitter Connect” into iOS 5. It’s something that all iOS apps will be able to easily use. And they should. Dropbox Partners With Softbank, Sony Ericsson to Build Asia, Europe Growth. Dropbox Inc., the Web storage provider with 25 million users, signed deals with mobile carrier Softbank Corp. (9984) and handset maker Sony Ericsson Mobile Communications AB to attract more customers in Asia and Europe. 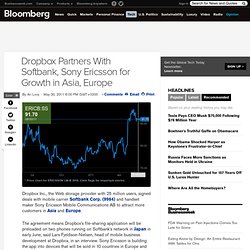 The agreement means Dropbox’s file-sharing application will be preloaded on two phones running on Softbank’s network in Japan in early June, said Lars Fjeldsoe-Nielsen, head of mobile business development at Dropbox, in an interview. Sony Ericsson is building the app into devices that will be sold in 10 countries in Europe and Asia. The partnerships are the first for San Francisco-based Dropbox, a startup whose app has surged in popularity as consumers turn to smartphones to take pictures, create videos and listen to music. The app lets users store and access their content from any computer, phone or tablet with a Web connection. Terms of the partnerships aren’t being disclosed. Dropbox’s app is currently available as a free download on Apple Inc. 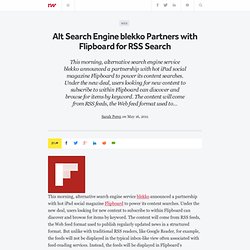 Under the new deal, users looking for new content to subscribe to within Flipboard can discover and browse for items by keyword. The content will come from RSS feeds, the Web feed format used to publish regularly updated news in a structured format. But unlike with traditional RSS readers, like Google Reader, for example, the feeds will not be displayed in the typical inbox-like view often associated with feed-reading services. Instead, the feeds will be displayed in Flipboard's magazine-like format for a more visually attractive experience.

RSS dead? Of course, Flipboard is not the first startup to display RSS feeds in a more attractive visual layout.