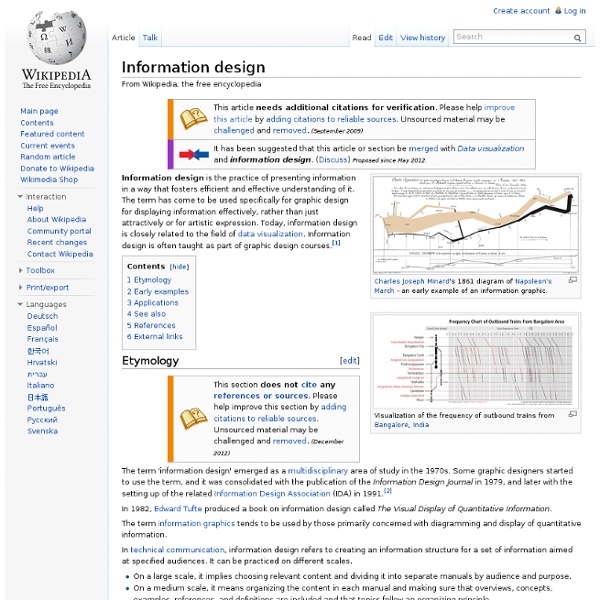 Information mapping Information Mapping is a technique that divides and labels information to facilitate comprehension, use, and recall. It was originally developed by Robert E. Horn.[1] Overview[edit] Information Mapping is a research-based method used to analyze, organize and present information based on your audience’s needs and the purpose of the information. The method is technology, subject-matter and media independent. Robert Horn and his colleagues identified dozens of common documentation types, then analyzed them into structural components called "information blocks". According to Horn and his colleagues, the seven most common information types are: Procedure: A set of sequential steps to complete a task.Process: An arrangement of tasks among disparate groups explaining how the groups interact. The Information Mapping goal is measurable results that change the way people present information. Notable Experts[edit] References[edit] Bibliography[edit] Robert E. External links[edit]

Industrial design An iPod, an industrially designed product. KitchenAid 5 qt. Stand Mixer, designed in 1937 by Egmont Arens, remains very successful today Western Electric Model 302 telephone, found throughout the United States from 1937 until the introduction of touch-tone dialing.[1] Calculator Olivetti Divisumma 24 designed in 1956 by Marcello Nizzoli All manufactured products are the result of a design process, but the nature of this process can take many forms: it can be conducted by an individual or a large team; it can emphasize intuitive creativity or calculated scientific decision-making, and often emphasizes both at the same time; and it can be influenced by factors as varied as materials, production processes, business strategy, and prevailing social, commercial, or aesthetic attitudes. History[edit] Precursors[edit] The division of labour that underlies the practice of industrial design did have precedents in the pre-industrial era. Birth of industrial design[edit] Education[edit] Institutions[edit]

Instructional design Process for design and development of learning resources Instructional design (ID), also known as instructional systems design (ISD), is the practice of systematically designing, developing and delivering instructional products and experiences, both digital and physical, in a consistent and reliable fashion toward an efficient, effective, appealing, engaging and inspiring acquisition of knowledge.[1][2] The process consists broadly of determining the state and needs of the learner, defining the end goal of instruction, and creating some "intervention" to assist in the transition. The outcome of this instruction may be directly observable and scientifically measured or completely hidden and assumed.[3] There are many instructional design models but many are based on the ADDIE model with the five phases: analysis, design, development, implementation, and evaluation. History[edit] Origins[edit] 1950s[edit] B. 1960s[edit] Robert Glaser introduced “criterion-referenced measures” in 1962.

Intelligence amplification Intelligence amplification (IA) (also referred to as cognitive augmentation, machine augmented intelligence and enhanced intelligence) refers to the effective use of information technology in augmenting human intelligence. The idea was first proposed in the 1950s and 1960s by cybernetics and early computer pioneers. IA is sometimes contrasted with AI (artificial intelligence), that is, the project of building a human-like intelligence in the form of an autonomous technological system such as a computer or robot. AI has encountered many fundamental obstacles, practical as well as theoretical, which for IA seem moot, as it needs technology merely as an extra support for an autonomous intelligence that has already proven to function. Major contributions[edit] William Ross Ashby: Intelligence Amplification[edit] .." J. "Man-Computer Symbiosis" is a key speculative paper published in 1960 by psychologist/computer scientist J.C.R. Man-computer symbiosis is a subclass of man-machine systems.

Immersive journalism Immersive Journalism is a form of journalism production that allows first person experience of the events or situations described in news reports and documentary film. Using 3D gaming and immersive technologies that create a sense of "being there" and offer the opportunity to personally engage with a story, immersive journalism puts an audience member directly into the event. By accessing a virtual version of the location where the story is occurring as a witness/participant, or by experiencing the perspective of a character depicted in the news story, the audience could be afforded unprecedented access to the sights and sounds, and even the feelings and emotions, which accompany the news.[1] Historical precedents[edit] Well-crafted journalism always aims to elicit a connection between the audience and the news story. Concepts[edit] Immersive journalism constructs allow the audience to enter a virtually recreated scenario representing the story. Scripted events[edit] A digital avatar[edit]

IPTV Internet Protocol television (IPTV) is the delivery of television content over Internet Protocol (IP) networks. This is in contrast to delivery through traditional terrestrial, satellite, and cable television formats. Unlike downloaded media, IPTV offers the ability to stream the source media continuously. As a result, a client media player can begin playing the content (such as a TV channel) almost immediately. Although IPTV uses the Internet protocol it is not limited to television streamed from the Internet, (Internet television). IPTV services may be classified into three main groups: Live television and live media, with or without related interactivity;Time-shifted media: e.g. catch-up TV (replays a TV show that was broadcast hours or days ago), start-over TV (replays the current TV show from its beginning);Video on demand (VOD): browse and view items in a stored media catalogue. Definition[edit] History[edit] Markets[edit] Residential[edit] Commercial and corporate[edit] Elements[edit]

InterPlanetary File System Content-addressable, peer-to-peer hypermedia distribution protocol IPFS can among others replace the location based hypermedia server protocols http and https to distribute the World Wide Web.[4][5][6] The more IPFS clients, that requests and gets data, the more IPFS clients can share data. IPFS has more advantages - IPFS can among others make these redundant: Design[edit] IPFS allows users to host and receive content in a manner similar to BitTorrent. In contrast to BitTorrent, IPFS aims to create a single global network. History[edit] IPFS was launched in an alpha version in February 2015, and by October of the same year was described by TechCrunch as "quickly spreading by word of mouth Applications[edit] Anti censorship[edit] The Catalan independence referendum, taking place in September–October 2017, was deemed illegal by the Constitutional Court of Spain and many related websites were blocked. Malware[edit] See also[edit] References[edit] External links[edit]

Interest graph Online representation of a person's views and desires to learn Suppose two people have similar interests, such as photo and they like the same music. So there is a relationship between them based on their interests which can be shown by interest graph. Red edges are the part of an interest graph, where relations (red edges) could be between (1) user and interest and (2) between users. An interest graph is an online representation of the specific things in which an individual is interested.[1] Interest graphs have perceived utility and value because of the premise that people's interests are a major aspect of who they are, forming part of their personal identity, and can be used as indicators of such things as what they might want to do or buy, where they might want to go, or who they might want to meet, follow or vote for.[2] Relationship of interest graph to social graph[edit] Interest graphs and social graphs are closely related, but they are not the same thing. See also[edit] ^ rr11.

Hypertext fiction Hypertext fiction is a genre of electronic literature, characterized by the use of hypertext links that provide a new context for non-linearity in literature and reader interaction. The reader typically chooses links to move from one node of text to the next, and in this fashion arranges a story from a deeper pool of potential stories. Its spirit can also be seen in interactive fiction. Definitions[edit] To Espen Aarseth, cybertext is not a genre in itself; in order to classify traditions, literary genres and aesthetic value, texts should be examined at a more local level.[3] To Aarseth, hypertext fiction is a kind of ergodic literature: In ergodic literature, nontrivial effort is required to allow the reader to traverse the text. To Aarseth, the process of reading immersive narrative, in contrast, involves "trivial" effort, that is, merely moving one's eyes along lines of text and turning pages; the text does not resist the reader. History[edit] Characteristics[edit] Criticism[edit]

Internet Relay Chat protocol for real-time Internet chat and messaging Internet Relay Chat (IRC) is an application layer protocol that facilitates communication in the form of text. The chat process works on a client/server networking model. IRC clients are computer programs that users can install on their system or web based applications running either locally in the browser or on a 3rd party server. These clients communicate with chat servers to transfer messages to other clients.[1] IRC is mainly designed for group communication in discussion forums, called channels,[2] but also allows one-on-one communication via private messages[3] as well as chat and data transfer,[4] including file sharing.[5] History[edit] Beginning[edit] IRC was created by Jarkko Oikarinen in August 1988 to replace a program called MUT (MultiUser Talk) on a BBS called OuluBox at the University of Oulu in Finland, where he was working at the Department of Information Processing Science. EFnet[edit] The Undernet fork[edit] Channels[edit]

Isomorphic JavaScript Mechanism[edit] Isomorphic JavaScript works in the context of a single-page application (SPA). In a typical SPA, most of the application logic, including routing, is encapsulated in a bundled JavaScript file that is sent to the client. With Isomorphic JavaScript, when a client web page is first requested from the server, the view of the page is generated on the server, similar to server-side dynamic web pages, and sent over to the client. Name[edit] The naming of the term 'Isomorphic JavaScript' has been a matter of controversy.[1] The term 'isomorphic' was first coined by Charlie Robbins from Nodejitsu, in one of the company's blog posts.[2] Spike Brehm, a software engineer from Airbnb, wrote another blog post using the same term.[3] However, others have proposed to use the term Universal JavaScript instead.[1][4] Benefits[edit] Frameworks[edit] References[edit]