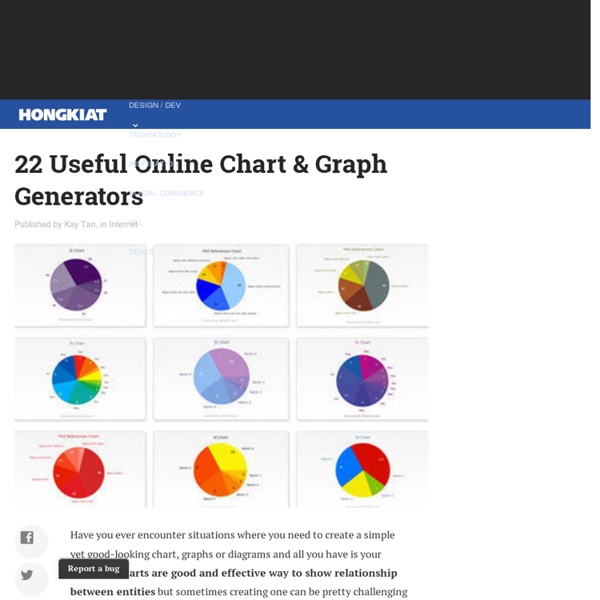 Have you ever encounter situations where you need to create a simple yet good-looking chart, graphs or diagrams and all you have is your browser? Charts are good and effective way to show relationship between entities but sometimes creating one can be pretty challenging especially when your favorite word processing software is not around. In today’s post, we want to highlight some of the best web services that allow you to create various charts and graphs online on-the-fly. Most of them are easy to use and don’t you even worry about the design. Your output will be as good as what you see in the screen shots below. Full list after jump. Rich Chart LiveCreate enjoyable and captivating Flash Charts from your web browser. DIY ChartDIY (Do it yourself) Chart is a Web-based, simple and powerful online tool to create interactive charts and graphs from static or dynamic data which may be generated using any scripting language. Hohli ChartsHohli Charts lets you dynamically generate charts.

10 Useful Flash Components for Graphing Data By Jacob Gube Flash is an excellent technology for dealing with data visualization. It being client-side, it can reduce the amount of work your server has to perform in order to generate graphs and charts. Because of its robust ability in dealing with sleek and fluid animation and complex user interactivity, Flash is an excellent web and (and even desktop) application technology for dealing with graphing data. In this article, you will find ten excellent Flash components that will help you in building stunningly attractive, complex, and interactive data visuals. These components will help you create an assortment of graphs and charts to aid in presenting otherwise boring and stale numerical data. 1. Open Flash Chart is an open source Flash-based graphing and charting solution developed using ActionScript 3 and compiled using Flex. Live Demonstrations: Open Flash Chart 2. XML/SWF Charts is a powerful Flash component for creating interactive graphs and charts. 3. zxChart 4. amCharts 5. 6. 7.

30+ Free Online Multimedia (Photo, Audio, Video) Editors We tend to rely heavily on our favorite desktop applications like Photoshop, GIMP, Audacity, Adobe Premier and so on when it comes to dealing with multimedia files. That’s fine on our desktops but what if we need to use an editor on a friend’s computer, or a public one at the workplace? That is where web applications come in handy. Web applications provide ubiquity, convenience and ease of use . As long as you have a web browser that connects to the Internet, you can find multimedia editors online to get your photos, audio files or even videos edited on the fly. Photo Editors Pixlr Editor Pixlr Editor allows you to edit images with features much like those you can find in Photoshop. Fotor Fotor is a tool to edit your photos and it comes with basic editing features (crop, rotate, adjust color, etc), on top of the ability to add effects such as lomo and vintage to beautify your photos. Picmonkey Befunky Polarr Editor Editor is a simple tool to edit your photos online. Fotostar Photo Editor SDK

iPad vs Kindle to be tight battle /via @kindle8 Kontest : Création de jeux-concours pour web et mobile - Appel à FusionCharts - Delightful charts and gauges in JavaScript & Flash 20+ Tools to Create Your Own Infographics A picture is worth a thousand words – based on this, infographics would carry hundreds of thousands of words, yet if you let a reader choose between a full-length 1000-word article and an infographic that needs a few scroll-downs, they’d probably prefer absorbing information straight from the infographic. What’s not to like? Colored charts and illustrations deliver connections better than tables and figures and as users spend time looking back and forth the full infographic, they stay on the site longer. While not everyone can make infographics from scratch, there are tools available on the Web that will help you create your very own infographics. Read Also: The Infographic Revolution: Where Do We Go From Here? What About Me? “What About Me?” Vizualize.me Vizualize.me allows you to create an online resume format that is beautiful, relevant and fun, all with just one click. Piktochart easel.ly Visual.ly Infogr.am Many Eyes Venngage iCharts Dipity Timeline JS StatSilk InFoto Free Photo Stats More Tools

Test Shows: iPhone Touchscreen Still the Best If the future is all about touchscreen interfaces, then performance of the screen in registering where it's been touched is pretty important. International design firm Moto ran a robotic finger test on 6 leading touchscreen smart phones to see how well they registered a robot's loving touch. Some of the phones did remarkably poorly, like the BlackBerry Storm and the Motorola Droid. The iPhone, Google Nexus One and HTC Droid Eris all did quite well. Check out the video below to see the tests and marvel at the apparent differences between touchscreens and their performances. Robot Touchscreen Analysis from MOTO Development Group on Vimeo. As Sadat Karim writes on Neowin, "Hope is not lost though, as Moto Labs concludes that they do expect these problems to be remedied in the future as touchscreens mature and gain further traction in the industry. To see touchscreen hardware nerds duke it out over the test, check out the Moto Labs blog.

Introduction XML/SWF Charts is a simple, yet powerful tool to create attractive charts and graphs from XML data. Create an XML source to describe a chart, then pass it to this tool's flash file to generate the chart. The XML source can be prepared manually, or generated dynamically using any scripting language (PHP, ASP, CFML, Perl, etc.) XML/SWF Charts makes the best of both the XML and SWF worlds. XML provides flexible data generation, and Flash provides the best graphic quality. Features: Quick generation of charts and graphs from static or dynamic data (any scripting language) Full updates and data streaming without reloading the web page. Testimonials I just wanted to pass along how well your script worked for our stock performance page. Good work! This is amazing software. Just want to thank you for this wonderful upgrade. I purchased your product a couple days ago and first had time to sit down and work with it this morning. Wow, you are the best! Thanks for your great script. THIS ROCKS!

30 Life-Enhancing Things You Can Do in 30 Minutes or Less Many of us attempt to measure our happiness based on the duration of certain favorable experiences in our lives. The longer a favorable experience lasts, the happier we think we’ll be. But the truth is, life is simply a string of small, independent moments that are always changing. Thus, a few minutes well spent here and there can make a big difference in what we get out of life in the long-term. Here are 30 things you can do in 30 minutes or less that will have a positive emotional effect on you and those closest to you. Learn something new by starting a free course at one of the hundreds of online self-education resources bookmarked here: 12 Dozen Places To Educate Yourself Online For Free.Watch one of the thousands of educational videos streaming at TED.com, Academic Earth, or Khan Academy.Read an online book list and find a new book to grab next time you’re at the library. What simple life-enhancing activities do you participate in on a regular basis? Photo by: Rachel Sian Related

iPad vs Kindle to be tight battle News In a new survey on e-reader awareness and purchase intent Apple's iPad media tablet has inched ahead of Amazon's Kindle. iPad users, however, see the device as more than just an e-book reader - with strong demand for its web-browsing, email and iPod music and video capabilities. In the comScore survey consumers were asked several questions regarding their awareness of various e-book readers and tablet devices and their past purchase behaviour or intent to purchase these devices. The iPad rated highest in terms of consumers seriously considering purchase over the next three months at 15 percent of internet users, with the Kindle at 14 percent. The results showed very high awareness of the iPad out of the gate, with an aided awareness of 65 percent, exactly the same as that of the Amazon Kindle e-reader. The Amazon Kindle rated highest in terms of current device ownership at 6 percent of all Internet users, followed by Sony Reader at 4 percent. NEXT: Apple iPad usage intentions

WikiMatrix - Compare them all Vitaly Friedman's Notebook: List of nifty tools for drawing diagrams, charts and flow-charts List of nifty tools for drawing diagrams, charts and flow-charts » Aug 18, 11:53 AM Update: The site is experiencing heavy load at the moment, please be patient. Meanwhile, you can digg the article, if you think it could be useful for other users. Being a web-developer means not only being able to design web-sites or program their functionality. Developing web-sites over the last few years, I’ve been stumbling over the same problem over and over again: how can I visualize my idea easily and quickly? The results of my search were initially published in one of the most popular German Web-Magazines Dr. (compiled by Vitaly Friedman) Tutorials “Creating Graphs, Part I” und “Creating Graphs, Part II” by Wolfgang Bartelme. Free Web-Tools Free Software 1st Chart creates high-resolution diagrams with the Chart-Elements you provide. Leading commercial products: