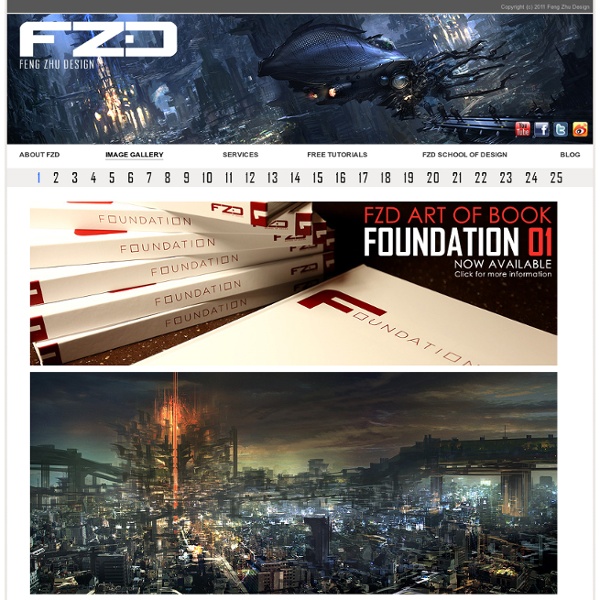 Designchapel March 21st, 2011 Selected Works: Illustration Labels: Designchapel, Work in progress I’m have started to prepare some stuff for an exhibition this spring in Stockholm. Two of the prints will be modified versions of my nun illustrations from 2001/2002. These illustrations where never planed to be used bigger then I had them on my original website from 2002, but they have been printed up to 140 x 140 cm which is insane when all details looks pretty bad. However, I thought it was an excellent way to both improve my painting techniques and fix these old illustrations for print. This is still work in progress but it will end up pretty close to this I think. Size 50 x 70 cm, 300 dpi. The original illustration was never mentioned to be bigger then 800 pixels high.

The Most Awesome Box Art In The World They may be known as Studio Liverpool today, but there once was a time British developers Psygnosis were responsible for the greatest video game covers of all time. From the mid-80s to the mid-90s, the team responsible for games like Lemmings, Shadow of the Beast and Barbarian (and who would later go on to create the Wipeout series on the PlayStation) broke from the infantile and/or boring styles preferred by other companies and went for a look that was part Heavy Metal, part Moebius and all brilliant. Things began to get a little more tame as the 90s dragged on, with fantastical art going out of style and Psygnosis moving away from home computer development and towards consoles, but for just under a decade, they were kings. In honour of that, then, we present this gallery of their finest work. [images via Psygnosis.org]

Sarah's Sketches FZD School of Design shotopop Hannes' Sandbox Virtual Lighting Studio - Interactive portrait lighting The ambient light represents the light coming from the studio environment. You can turn it on or off and change its color and intensity. If you're lost and need some help, click here. This is a schematic view of the studio. These are all the available models for lighting. These slots are used to capture your light setups. You can save a picture of your capture on your device by using the "Save As..." command of your browser on the capture thumbnails. This button is used to share or bookmark your current settings. This is the main view which displays your lit subject as seen through your camera. The garbage is used to clear your captured light setups. Here you can turn on or off your lights. The solo button enables you to temporarily visualize the effect of a single light in your setup. A gel can be added on a light to change the light color. This displays the intensity of the light. Use your light bare or use one of the modifiers in this list.

Vanesa Carosia AG Artworks | Ahmed Gamal's artistic portfolio Sean Cheetham: Oil Painting To achieve accuracy and harmony in his alla prima figure paintings, Californian Sean Cheetham stresses drawing and a system of mixing colors based from “mud” mixtures, as he calls them, that govern shadows, midtones, and highlights. He recently offered lengthy demonstrations of those techniques during a five-day workshop. by M. Stephen Doherty Even though he is not yet 30 years old, Sean Cheetham has already established a strong reputation with art collectors and students in Southern California. In addition to having an exceptional ability to understand, draw, and paint the human form, Cheetham relies on a palette of colors and a painting technique he learned from Mike Hussar, his professor and friend at Art Center College of Design, in Pasadena, California. This system has several distinct advantages, especially for inexperienced painters. Cheetham dipped a filbert-shaped bristle brush into a jar of Turpenoid and rubbed it into the mud color on his palette. M.