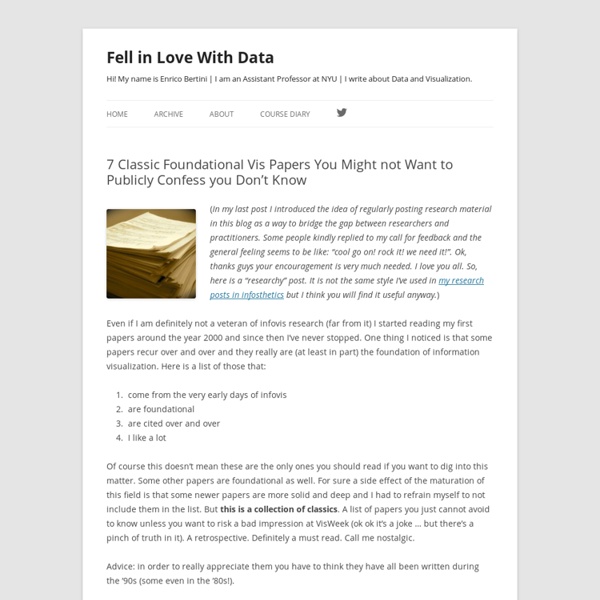 (In my last post I introduced the idea of regularly posting research material in this blog as a way to bridge the gap between researchers and practitioners. Some people kindly replied to my call for feedback and the general feeling seems to be like: “cool go on! rock it! we need it!”. Ok, thanks guys your encouragement is very much needed. I love you all. Even if I am definitely not a veteran of infovis research (far from it) I started reading my first papers around the year 2000 and since then I’ve never stopped. come from the very early days of infovisare foundationalare cited over and overI like a lot Of course this doesn’t mean these are the only ones you should read if you want to dig into this matter. Advice: in order to really appreciate them you have to think they have all been written during the ’90s (some even in the ’80s!). Graphical Perception: Theory, Experimentation, and Application to the Development of Graphical Methods. Please don’t tell me you don’t know this one!

Strata Gems: Quick starts for charts We’re publishing a new Strata Gem each day all the way through to December 24. Yesterday’s Gem: Use Write your own visualizations. If you’re trying to summarize your data, you’ll likely show it in a chart. It’s easy to reach for a “standard” option, perhaps even the much-maligned pie chart: few of us leave education with a repertoire of more than a few chart types. Aside from giving your audience visual ennui, the usual suspects can be limited in what they convey. This probably isn’t news to you. Excel: Chart Chooser Juice Analytics’ Chart Chooser is a chart-style recommendation engine. Going one step further than just recommendation, the chart chooser offers Excel and Powerpoint template files that you can alter and fill with your own data. Some of the 17 chart types available from Chart Chooser R: Advanced Charts If you’re using the R statistical computing package, many chart types become available to you. The Web: Tableau Public Tableau is a leading visualization software package.

How to make your infographics accessible and SEO friendly at the same time Infographics are everywhere. Some good - some bad. But most creators don't stop to think how to make sure search engines can understand their infographic - or how people who can't see pictures can consume them (maybe because they rely on screen readers or have chosen not to download images to their mobile phone). The trick to make infographics accessible and SEO friendly is to ensure: they're chopped into relevant sections (ie not one big image),text is text (you should be able to select it with a mouse)if anything has to be shown as an image, you set appropriate ALT text (the flipside of this is that, if the image doesn't add any information, you DON'T set ALT text - I'll explain this below.) Making an infographic accessible There's lots of infographics out there. Also I should point out that I'm a crap HTML coder so if anyone can improve on this, do let me know. Separate images and text As it stands, that bottom left bit is just part of an enormous image. What now? OK, you're thinking.

50 Must-Download Apps For Lifelong Learners Added by Jeff Dunn on 2012-08-13 Long after degrees have been conferred and careers have been launched, many folks just can’t seem to quit school. For them, life provides an overstuffed cornucopia of educational opportunities that don’t necessarily require hefty loans and navigating different professorial strategies. Those with a lust for learning who happen to also enjoy testing the limits of what the iPad offers definitely don’t have to worry about finding resources to pique their fancy. Hundreds, if not thousands, of apps are out there just twitching for users to fire them up and absorb a mental nugget or two. History and Geography World Atlas HD : iPad users can download this stunning, popular digital atlas by the National Geographic Society and educate themselves about the planet’s physical and cultural properties and relationships. Language, Reading, and Writing Open Source and General Learning Reference Science and Math Comments are closed.

Stephen Few: Information Visualization Research Projects that Would Benefit Practitioners In a previous blog post titled “Potential Information Visualization Research Projects,” I announced that I would prepare a list of potential research projects that would address actual problems and needs that are faced by data visualization practitioners. So far I’ve prepared an initial 33-project list to seed an ongoing effort, which I’ll do my best to maintain as new ideas emerge and old ideas are actually addressed by researchers. These projects do not appear in any particular order. Some of the projects that appear in the Effectiveness and Efficiency Tests section have been the subject matter of past projects. Please feel free to respond to this blog post or to me directly at any time with suggestions for additional research projects or with information about any projects on this list that are actually in process or already completed. Effectiveness and Efficiency Tests New Solution Designs and Tests Taxonomies and Guidelines Take care,

VisualEyes dataist blog: An inspiring case for journalists learning to code | Dan Nguyen pronounced fast is danwin About a year ago I threw up a long, rambling guide hoping to teach non-programming journalists some practical code. Looking back at it, it seems inadequate. Actually, I misspoke, I haven’t looked back at it because I’m sure I’ll just spend the next few hours cringing. For example, what a dumb idea it was to put everything from “What is HTML” to actual Ruby scraping code all in a gigantic, badly formatted post. The series of articles have gotten a fair number of hits but I don’t know how many people were able to stumble through it. Mapping of Ratata blogging network by Jens Finnäs of dataist.wordpress.com I hope other non-coders who are still intimidated by the thought of learning programming are inspired by Finnas’s example. ProPublica’s Dollars for Docs project originated in part from this Pfizer-scraping lesson I added on to my programming tutorial: I needed a timely example of public data that wasn’t as useful as it should be. In fact, just knowing to avoid taking notes like this:

Brain Games for Adults Brain games are fun to play at gatherings, meetings, kitty parties or on outings. Most of the brain games usually include trick questions and brain teasers, or some very hard riddles. The following are some brain games that you can play in both small and large groups. The Stroop Test The Stroop test is a brilliant way to test a person's mental flexibility and concentration. Analogy This game is a favorite among kids, but can be played by adults too. The Face of the Penny This is a very nice brain game for adults. Concentrating on Numbers Among all the brain games for adults, this one is rather popular. If you are in a small group then it would be appropriate to play some nice math riddles and puzzles. Information Visualization Research as Pseudo-Science - Perceptual Edge Discussion Forum Despite the unnecessarily aggressive tone, critiques like this are important for the advancement of science. I am looking forward to the authors' responses and I hope this critique will start an insightful and constructive debate. Although I haven't had the chance to read the paper yet, the part on statistical unreliability seems exaggerated irrespective of the paper's content. The proper choice of sample size does depend on several factors. A few are already mentioned, but the most important of all is effect size. Sample representativeness is also important to consider, but no researcher tries to collect a truly random sample of the entire world's population, including in cognitive sciences where "the scientific method" is used. Power analysis can improve study design, but it is hard to put in practice and is not without problems. No one would question that an ideal study should use power analysis and a large sample size that is representative of a meaningful population.

d3.js Coding for Journalists 101 : A four-part series | Dan Nguyen pronounced fast is danwin Photo by Nico Cavallotto on Flickr Update, January 2012: Everything…yes, everything, is superseded by my free online book, The Bastards Book of Ruby, which is a much more complete walkthrough of basic programming principles with far more practical and up-to-date examples and projects than what you’ll find here. I’m only keeping this old walkthrough up as a historical reference. So check it out: The Bastards Book of Ruby -Dan Update, Dec. 30, 2010: I published a series of data collection and cleaning guides for ProPublica, to describe what I did for our Dollars for Docs project. So a little while ago, I set out to write some tutorials that would guide the non-coding-but-computer-savvy journalist through enough programming fundamentals so that he/she could write a web scraper to collect data from public websites. As the tutorials are aimed at people who aren’t experienced programming, the code is pretty verbose, pedantic, and in some cases, a little inefficient.