Random Thoughts of People Our Age 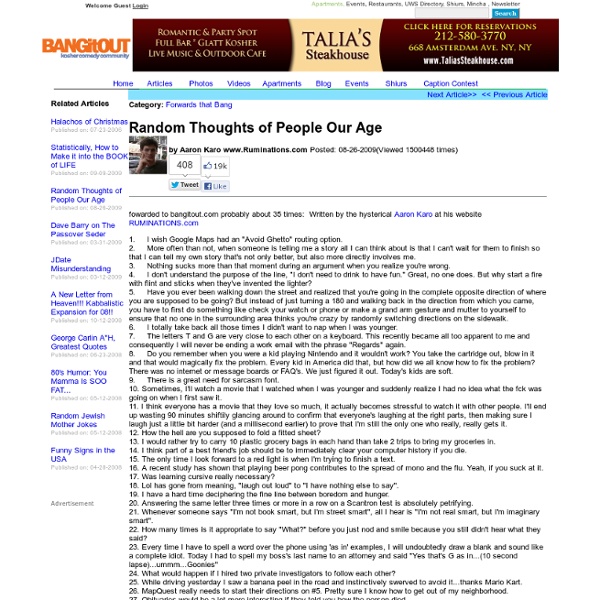 30 Amazingly Creative Examples of Designer Resumes It’s extremely hard to find a job these days! The market is slow, the economy is bad, and the competition is fierce. To get a job you will have to stand out of the crowd. Top 10 Crazy Facts About Kim Jong Il Facts North Korea’s pint-sized dictator is a master of propaganda and social manipulation, but he also apparently suffers from insecurity, delusion, and severe OCD. Here are 10 “facts” about Kim Jong Il, as reported by the media. The word “facts” is in quotes because the first 5 on the list are examples of propaganda that Kim Jong Il uses to brainwash his citizens into maintaining his almost god-like image. The last 5 are actual facts. The “Fact”: He had a supernatural birth

Bay of Fundie» Blog Archive » Asshole Jesus I’ve seen the original versions of these pictures floating around the internet for quite a while now. They’re somehow supposed to be “inspirational”. I find the whole idea that there’s an invisible guy following me around and watching everything I do to be quite creepy.

Stylish Chateau Interior Designs, Beautiful Interior Designs, French Style Interiors, Lavish French Style Interiors French Chateau house design was inspired by the Renaissance movement. It originated in the Loire Valley, France and was popular from 1400 to 1600 in French countryside. French chateau homes are monumental country homes built with limestone or bricks on asymmetrical plans with elaborate details. Key elements of French Chateau are highly pitched roofs with broken roof lines, facades with many planes either protruding or recessing and stucco leading to the interiors. Windows are generally divided by heavy mullions. Douglas Adams -  Australia He was a great story writer, who could always make the most trivial things, hilarious. As you can see here in Douglas Adams' depiction of Australia Australia is a very confusing place, taking up a large amount of the Bottom half of the planet. It is recognisable from orbit because of many unusual features, including what at first looks like an enormous bite taken out of its southern edge; a wall of sheer cliffs which plunge deep into the girting sea. Geologists assure us that this is simply an accident of geomorphology and plate tectonics, but they still call it the "Great Australian Bight" proving that not only are they covering up a more frightening theory, but they can't spell either. The first of the confusing things about Australia is the status of the place.

Gifts in a Jar Great for gift giving, and economical also. I have tried to include a little of everything here in hopes that it will meet the need you have. Keep in mind that it is a nice start for building a basket. Travel « Travel La Plage Casadelmar, Corsica March 20th, 2013 – On the shores of Corsica’s Porto-Vecchio, La Plage Casadelmar , a 15-suite boutique hotel will soon be opening its doors. Beloved French architect Jean-François Bodin , also responsible for creating the Mathaf: Arab Museum of Modern Art in Doha and the Cité de l’Architecture et du Patrimoine in Paris, took an old stone structure then used natural materials and simple lines to add a contemporary blend to the coastal surroundings.

If 'Twilight' Was 10 Times Shorter And 100 Times More Honest On Saturdays, we ask some of our favorite sites on the web to fill in for us. You get to learn about an awesome site you may not have heard of, and we get to watch cartoons in our boxers. Today Rod Hilton, creator of The-Editing-Room.com brings you an abridged version of the screenplay for Twilight, the movie based on Stephanie Meyer's novel. KRISTEN STEWART goes to FORKS, WASHINGTON. Once upon a time, there lived an enchanting girl named Stephanie Meyer, er I mean Kristen Stewart. She was so awesome that her awesomeness couldn't be contained in Arizona, so she moved to Washington to stay with her father, who was totally lame and not cool.

12 Critical Things You Should Never Tolerate There is so much in life that we just tolerate. Some of it we have to deal with (taxes, bad weather, traffic). But there’s a good portion of stuff that we tolerate even when we don’t have to. We step around things, overlook irritations, and mindlessly accept energy drains.