To the Struggle Against World Terrorism, A Monument Created by Zurab Tsereteli as a gift to the American people. He Saved 669 Children During The Holocaust... And He Doesn’t Know They're Sitting Next To Him. Here Are 9 Crazy Facts About Disney We Bet You Didn't Already Know. 5 Google Chrome Extensions to Help Your School Save Ink & Paper. Yesterday, I published Ten Useful Google Chrome Web Apps and Extensions for Teachers and Students. 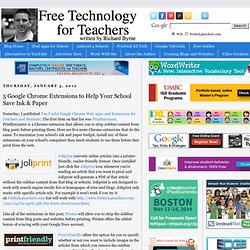 The first item on that list was Printliminator. Printliminator is a Chrome extension that allows you to strip sidebar content from blog posts before printing them. Here are five more Chrome extensions that do the same. To maximize your school's ink and paper budget, install any of these extensions on your school's computers then teach students to use them before they print from the web. Joliprint converts online articles into a printer-friendly, reader-friendly format. Like all of the extensions in this post, Printee will allow you to strip the sidebar content from blog posts and websites before printing.

The Awesome, Unexpected Moments When These Women Feel Most Beautiful. Dying teacher's amazing quest. .facebook_244260915. The Fact That You Exist Is Actually Incredible. Have you ever stopped to think about how amazing it is that you actually exist? 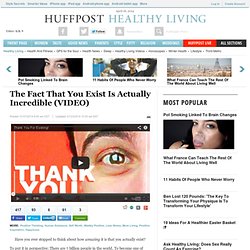 To put it in perspective: There are 7 billion people in the world. To become one of those 7 billion citizens, several important, star-aligning moments had to happen. Your parents had to be in the same place at the same time, they had to converse, overcome a series of events or challenges, find each other attractive or go on dates and so on. That's pretty powerful. Still not convinced of your worth? "Every person you meet, every conversation you have, everything that you do, every heartache, every blissful moment -- that creates who you would be now," Pat Graziosi explains in his Weekly Positive series video. Approaching life with a positive attitude has been proven to help people live longer, handle stress more smoothly and even broadens the mind for a greater sense of possibility.

Check out the video above for more positive inspiration and revel in the fact that your existence is awesome. 7-Year-Old Sophie Lester Asks Australian Science Agency For Pet Dragon.. And They Deliver! (UPDATE) An inquiry from a hopeful 7-year-old has prompted the Commonwealth Scientific and Industrial Research Organization (CSIRO), Australia's national science agency, to issue an apology -- about the failure to research dragons. 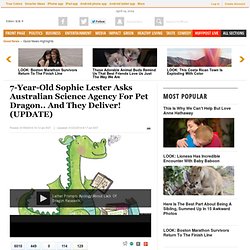 Sophie Lester, who lives in Queensland, had a very special Christmas request, according to the Canberra Times. She asked her parents for a pet dragon. "Her dad sat her down and said we couldn't get her one," her mother, Melissah Lester, told Fairfax Media. "But he suggested why don't we write and see if someone can get you one?

And she said, 'What about a scientist? '" So Sophie reached out to the CSIRO's experts. Story continues below. WATCH: This Choir Might Restore Your Faith in Humanity. At first glance, a choir may seem like nothing more than a group of singers. 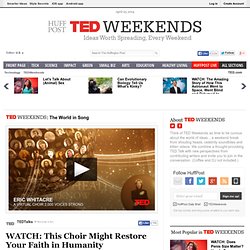 But look a little closer. Conductor Eric Whitacre's performers don't simply sing. They remind us of what it means to be truly connected. Eric Whitacre's first TED talk, "A Virtual Choir 2,000 Voices Strong," was the basis for one of our most popular TED Weekends programs from the past year. So we decided to bring it back in time for the holiday season. Ideas are not set in stone. More in The World in Song. This Middle School Football Team Went Behind Their Coaches' Backs To Do Something Incredible (Video) Let’s face it: we’re not above making fun of our own stereotypes. 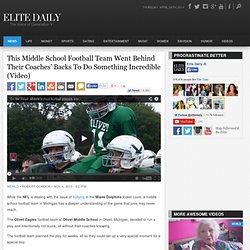 Call it another dimwitted list or call it the utmost form of self-awareness — we know we’ve behaved in these ways and we’re here to laugh about it now. Whether you are that girl, know that girl or have been that girl — […] Some people put tears under their eyes to show the people they’ve lost, or the people they’ve murdered. One English rapper named Dappy put a hashtag under his eye instead. The N-Dubz rapper (don’t worry, you shouldn’t know) explained the move to his Twitter followers: “The reason I got a # Tatted on my FACE […] If you own a cellphone, then at some point in your life you’ve texted someone something they were never meant to see. We have all witnessed a 5-year-old’s temper tantrum, but if you’re one of those rare and lucky people who has not, take a walk into your local toy store. Miley Cyrus was hospitalized yesterday after she had an allergic reaction to antibiotics. What do Tom Brady and the conductor of the NY Philharmonic have in common? - CBS This Morning.