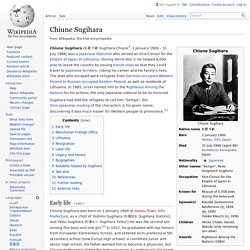 , 1 January 1900 – 31 July 1986) was a Japanese diplomat who served as Vice-Consul for the Empire of Japan in Lithuania. During World War II, he helped 6,000 Jews to leave the country by issuing transit visas so that they could travel to Japanese territory, risking his career and his family's lives. The Jews who escaped were refugees from German-occupied Western Poland or Russian-occupied Eastern Poland, as well as residents of Lithuania.

In 1985, Israel named him to the Righteous Among the Nations for his actions, the only Japanese national to be so honored. Sugihara had told the refugees to call him "Sempo", the Sino-Japanese reading of the characters in his given name, discovering it was much easier for Western people to pronounce.[1] Early life[edit] Manchurian Foreign Office[edit] When Sugihara served in the Manchurian Foreign Office, he took part in the negotiations with the Soviet Union concerning the Northern Manchurian Railroad. Kirsten Gillibrand. In December 2008, President-elect Barack Obama nominated Hillary Rodham Clinton as Secretary of State, leaving an empty seat in the New York senate delegation. 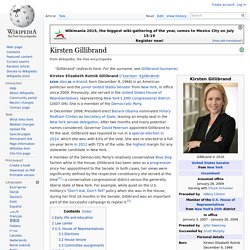 After two months and many potential names considered, Governor David Paterson appointed Gillibrand to fill the seat. Gillibrand was required to run in a special election in 2010, which she won with 63% of the vote. She was re-elected to a full six-year term in 2012 with 72% of the vote, the highest margin for any statewide candidate in New York. A member of the Democratic Party's relatively conservative Blue Dog faction while in the House, Gillibrand has been seen as a progressive since her appointment to the Senate. In both cases, her views were significantly defined by the respective constituency she served at the time[1]—a conservative congressional district versus the generally liberal state of New York. Jane Elliott's Blue Eyes/Brown Eyes Exercise. Sekai Holland. Forgiveness and Reconciliation. TONY JONES: Good evening. 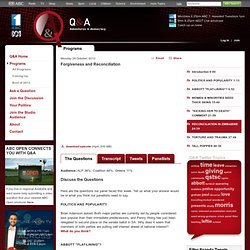 Welcome to Q&A. I'm Tony Jones and answering your questions tonight political strategist and Federal Director of Barton Deakin Government Relations Grahame Morris; Minister for Sport and Multicultural Affairs, Kate Lundy; singer, songwriter and member of the stolen generation, Archie Roach; the Zimbabwe Minister for National Healing and Reconciliation, winner of the 2012 Sydney Peace Prize, Sekai Holland; and the Leader of the Opposition in the Senate, Eric Abetz. Please welcome our panel. Q&A is live from 9:35 eastern daylight saving time. It is simulcast on News 24 and News Radio. Dora Akunyili. Dora Nkem Akunyili (born July 14, 1954 in Makurdi, Benue State) is the former Director General of National Agency for Food and Drug Administration and Control (NAFDAC) of Nigeria and former (December 17, 2008 - December 15, 2010) Nigerian Minister of Information and Communications. 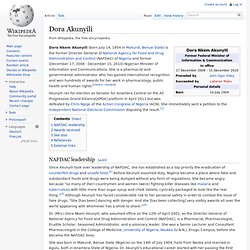 She is a pharmacist and governmental administrator who has gained international recognition and won hundreds of awards for her work in pharmacology, public health and human rights. [citation needed] Akunyili ran for election as Senator for Anambra Central on the All Progressive Grand Alliance[APGA] platform in April 2011 but was defeated by Chris Ngige of the Action Congress of Nigeria (ACN). She immediately sent a petition to the Independent National Electoral Commission disputing the result.[1] NAFDAC leadership[edit] Dr. One woman's war with fake drugs. Counterfeit drugs are flooding the international marketplace, but Nigeria's Dr Dora Akunyili fights day and night to stop it. 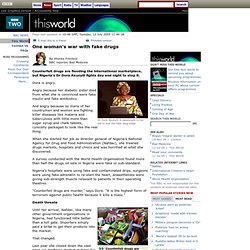 Dora is angry. Angry because her diabetic sister died from what she is convinced were fake insulin and fake antibiotics. And angry because so many of her countrymen and women are fighting killer diseases like malaria and tuberculosis with little more than sugar syrup and chalk tablets, cynically packaged to look like the real thing. When she started her job as director general of Nigeria's National Agency for Drug and Food Administration (Nafdac), she trawled drugs markets, hospitals and clinics and was horrified at what she discovered. A survey conducted with the World Health Organisation found more than half the drugs on sale in Nigeria were fake or sub-standard. "Counterfeit drugs are murder," says Dora. Death threats. Dartanyon Crockett and Leroy Sutton. High School Teammates and Wrestlers "Carry On" Rep. Duckworth Deplores Witness for Claiming Veterans Disability. Tammy Duckworth. Duckworth previously served as Assistant Secretary for Public and Intergovernmental Affairs in the United States Department of Veterans Affairs from April 24, 2009 to June 30, 2011, and as the Director of the Illinois Department of Veterans Affairs from November 21, 2006 to February 8, 2009. 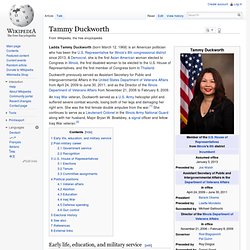 Early life, education, and military service[edit] Tammy Duckworth was born in Bangkok, Thailand, to Frank and Lamai Duckworth. Her American father, who died in 2005,[3] was a U.S. Marine Corps veteran who traced his family's roots in America back to before the Revolutionary War; her mother, a native of Thailand, is of Chinese ancestry.[4] Because of her father's work with the United Nations and international companies, the family moved around Southeast Asia.

Duckworth became fluent in Thai and Indonesian, in addition to English.[5] The family settled in Hawaii when she was sixteen. Duckworth also worked as a staff supervisor at Rotary International headquarters in Evanston, Illinois.[8][12] U.S.