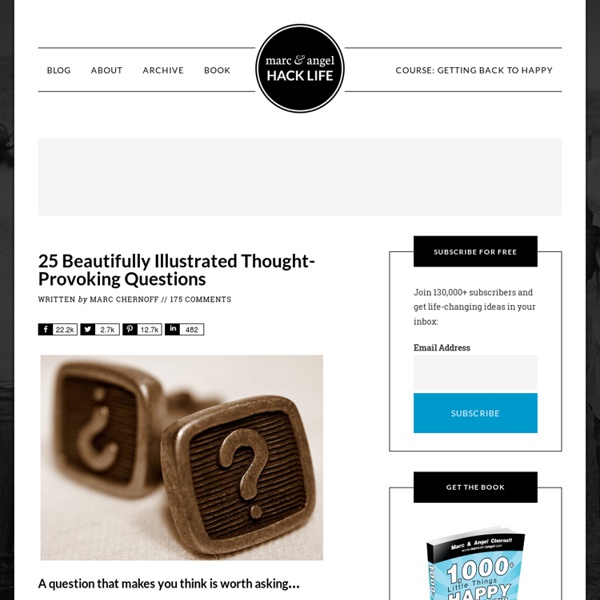 A question that makes you think is worth asking… At the cusp of a new day, week, month, or year, most of us take a little time to reflect on our lives by looking back over the past and ahead into the future. We ponder the successes, failures and standout events that are slowly scripting our life’s story. This process of self reflection helps us maintain a conscious awareness of where we’ve been and where we intend to go. It is pertinent to the organization and preservation of our dreams, goals and desires. If you would like to maximize the benefits of self reflection, our new sister site, Thought Questions, is for you. Remember, these questions have no right or wrong answers. Here’s a sample of 25 recent thought questions posted on the site: Thought Questions is updated daily. Title photo by: Oberazzi For all other photo credits please refer to ThoughtQuestions.com Related 6 Questions that Will Save Your Relationships May 21, 2014 In "Life" 20 Questions You Should Ask Yourself Every Sunday

15 Awesome Inspirational Quotes by Celebrities and Famous People Let these words of greatminds inspire you and help you to achieve your goals and live a fulfilling life. (Image Source) (Image Source) (Image Source) It is possible to understand Engineers - Where there's a will, there's a way. Understanding Engineers #1 Two engineering students were biking across a university campus when one said, "Where did you get such a great bike?" The second engineer replied, "Well, I was walking along yesterday, minding my own business, when a beautiful woman rode up on this bike, threw it to the ground, took off all her clothes and said, "Take what you want." 11 Things Everyone Needs You to Know “One love, one heart, one destiny.” -Bob Marley A silhouette of a human being stands before you. Perhaps an old friend.

40 Belief-Shaking Remarks From a Ruthless Nonconformist If there’s one thing Friedrich Nietzsche did well, it’s obliterate feel-good beliefs people have about themselves. He has been criticized for being a misanthrope, a subvert, a cynic and a pessimist, but I think these assessments are off the mark. I believe he only wanted human beings to be more honest with themselves. He did have a remarkable gift for aphorism — he once declared, “It is my ambition to say in ten sentences what others say in a whole book.” A hundred years after his death, Nietzsche retains his disturbing talent for turning a person’s worldview upside-down with one jarring remark. Fallacy List 1. FAULTY CAUSE: (post hoc ergo propter hoc) mistakes correlation or association for causation, by assuming that because one thing follows another it was caused by the other. example: A black cat crossed Babbs' path yesterday and, sure enough, she was involved in an automobile accident later that same afternoon. example: The introduction of sex education courses at the high school level has resulted in increased promiscuity among teens.

25 new great quotes! Here’s a new collection of great quotes by some of the most inspirational men and women that ever walked this earth. If you do like them and find them inspirational or helpful in some way, check out the links below for similar posts. We have created over 20+ of these galleries, so there is lots more to be seen. Also, be sure to inspire your coworkers, friends and family by sharing these quotes with them. Various quotations In From up North’s inspiration galleries we present the latest of our findings from the wonderful world of design. Amazing high quality artworks in various categories from great designers all over the globe. Quote by George Bernard Being happy… Sometimes I pretend to be normal…

How to Repel Your Unwanted Crushes: 6 steps Edit Article Edited by WannaBeFamous, Teresa, Maluniu, David and 7 others An unwanted crush is both flattering and challenging at the same time. Top 10 Thinking Traps Exposed Our minds set up many traps for us. Unless we’re aware of them, these traps can seriously hinder our ability to think rationally, leading us to bad reasoning and making stupid decisions. Features of our minds that are meant to help us may, eventually, get us into trouble. Here are the first 5 of the most harmful of these traps and how to avoid each one of them. 1. Why willpower matters – and how to get it In the smart restaurant of a very smart hotel in the West End of London, Roy F Baumeister, eminent American social psychology professor, orders a lunch of fish and chips, and then decides not to eat the chips. "I won't eat something that's not good for me unless it's absolutely perfect, and it's going to give me real pleasure," he says. "I'm afraid ... Well, it just didn't look like these were going to do either." What willpower, you might say. You'd be right; the chips looked pretty good.

Quotes from Starbucks - Influential Mom Blogger, Parenting, Community 10K Amazing Shares Facebook 3 Pin It Share 7 7 Twitter 0 Google+ 12 StumbleUpon 10K Email -- Email to a friend 10K Amazing Shares × Wisdom from a cup of coffee….. 12 Tips on How to Design a Life of Your Choice Edit Article The exercise for designing your life Edited by Shyamsunder Panchavati, BR, Teresa, Lojjik Braughler and 17 others A lot of us tend to take life for granted, "taking life as it comes" and using that to justify inaction or lethargy. We think that by the time we're in our 40s or 50s, that everything will have fallen into place by itself. The truth is, for most people, only after 20 or 30 years of working, we discover what we do not want, without a clue as to what we really want in life.

A Victim Treats His Mugger Right Julio Diaz has a daily routine. Every night, the 31-year-old social worker ends his hour-long subway commute to the Bronx one stop early, just so he can eat at his favorite diner. But one night last month, as Diaz stepped off the No. 6 train and onto a nearly empty platform, his evening took an unexpected turn. He was walking toward the stairs when a teenage boy approached and pulled out a knife. "He wants my money, so I just gave him my wallet and told him, 'Here you go,'" Diaz says.

Self-Image Is The Key To Success In Business And In Life “There are no limitations to the mind except those we acknowledge."--Napoleon Hill It has been conclusively demonstrated that individuals who expect to succeed at a given venture are more likely to do so than those who expect to fail. Positive expectations work as a sort of self-fulfilling prophecy--those who expect to succeed are more likely to do so, thus maintaining and reinforcing their expectation for success. Today, we are going to take this analysis one step further and address the underlying cause of these expectations.