Sharing Pizza with a Stranger. I had a brief trip to Chicago to play a gig and this being my first trip to the historic city, I had a small list of to do’s. 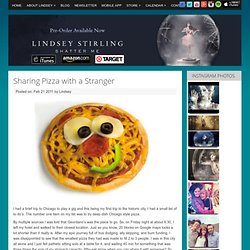 The number one item on my list was to try deep dish Chicago style pizza. By multiple sources I was told that Geordano’s was the place to go. Homeless Bum. I had to move out of my apartment on the 26th and unfortunately I couldn’t move into my new place till the 30th. 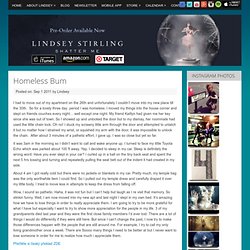 So for a lovely three day period I was homeless. I moved my things into the house corner and slept on friends couches every night… well except one night. My friend Kaitlyn had given me her key since she was out of town. So I showed up and unlocked the door but to my dismay, her roommate had used the little chain lock. What I Learned in Kenya. I posted a video a few months ago highlighting my trip to Kenya. 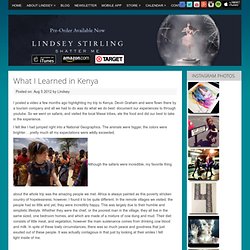 Devin Graham and were flown there by a tourism company and all we had to do was do what we do best: document our experiences to through youtube. So we went on safaris, and visited the local Masai tribes, ate the food and did our best to take in the experience. It’s Never too Late to Un-shelved Dream. As a 6-year-old little girl I begged my parents for two things: I wanted to play the violin and I wanted dance lessons. 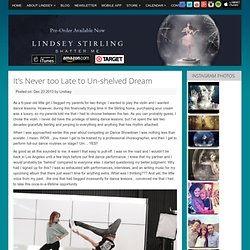 However, during this financially trying time in the Stirling home, purchasing sour cream was a luxury, so my parents told me that I had to choose between the two. As you can probably guess, I chose the violin. I never did have the privilege of taking dance lessons, but I’ve spent the last two decades gracefully twirling and jumping to everything and anything that has rhythm attached. When I was approached earlier this year about competing on Dance Showdown I was nothing less than ecstatic. I mean, WOW…you mean I get to be trained by a professional choreographer, and then I get to perform full-out dance routines on stage? As good as all this sounded to me, it wasn’t that easy to pull-off. So when I finally got back in L.A. From that first day on, we worked EXTREMELY hard. The days flew by.

Are you Maximizing your Minute or Making the Most of the Moment. Halloween…What mask are you wearing? Halloween is probably my favorite holiday. 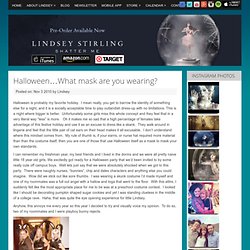 I mean really, you get to barrow the identity of something else for a night, and it is a socially acceptable time to play outlandish dress-up with no limitations. This is a night where bigger is better. Unfortunately some girls miss this whole concept and they feel that in a very literal way “less” is more. Oh it makes me so sad that a high percentage of females take advantage of this festive holiday and use it as an excuse to dress like a skank. They walk around in lingerie and feel that the little pair of cat ears on their head makes it all excusable. Its My Birthday!!!! So, today is that special day that only comes once a year. 24 years ago on this very day, I was birthed. 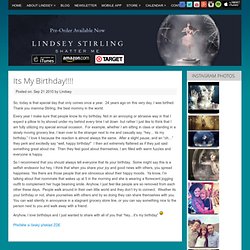 Thank you mamma Stirling, the best mommy in the world. Crowns, Cosmetics and Compairing. Bus Ride of People. I am a frugal person and since am always juggling a myriad of diverse activities, i try to make the best use of time. 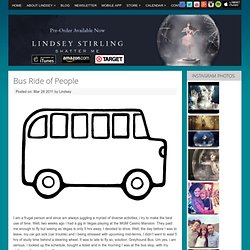 Well, two weeks ago I had a gig in Vegas playing at the MGM Casino Mansion. They paid me enough to fly but seeing as Vegas is only 5 hrs away, I decided to drive. Well, the day before I was to leave, my car got sick (car trouble) and I being stressed with upcoming mid-terms, I didn’t want to wast 5 hrs of study time behind a steering wheel. Places that Matter Most. I have a job working at a treatment center for troubled teenage girls. 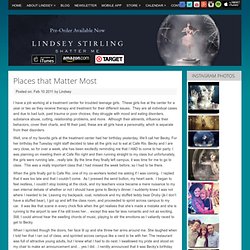 These girls live at the center for a year or two as they receive therapy and treatment for their different issues. They are all individual cases and due to bad luck, past trauma or poor choices, they struggle with mood and eating disorders, substance abuse, cutting, relationship problems, and more. Although their ailments, influence their behaviors, cover their charts, and fill their past, these are all girls have a personality, which is separate from their disorders. Well, one of my favorite girls at the treatment center had her birthday yesterday. We’ll call her Becky. Value of Your List. Last week was exhausting. 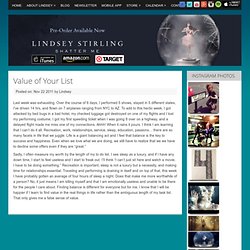 Over the course of 6 days, I performed 5 shows, stayed in 5 different states, I’ve driven 14 hrs, and flown on 7 airplanes ranging from NYC to AZ. To add to this hectic week, I got attacked by bed bugs in a bad hotel, my checked luggage got destroyed on one of my flights and I lost my performing costume, I got my first speeding ticket when I was going 8 over on a highway, and a delayed flight made me miss one of my connections.

Ahhh! When it rains it pours. Leave an Impact. I just visited 4 countries in the past 4 days: Germany, Austria, UK, and I am currently on a plane heading back to the US. 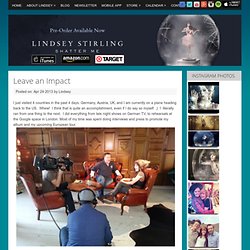 Whew! I think that is quite an accomplishment, even if I do say so myself ;) I literally ran from one thing to the next. I did everything from late night shows on German TV, to rehearsals at the Google space in London. Most of my time was spent doing interviews and press to promote my album and my upcoming European tour. My whole day in Vienna was spent doing interviews; 20 interviews to be specific. Dancing in the Rain. I am going to divulge a little secret. I am not the biggest fan of working out. Service Traditions. For the duration of December, the Stirling home is filled with familiar sounds, smells, and activities that bring up memories from the past and fills me up like a rich cup of hot chocolate.

These include the scratchy sound of the old record player that plays our favorite Christmas tunes, the annual Christmas photo shoot with our new pajamas, watching A Christmas Story while eating Chinese food, smelling of home-made banana bread, having a Christmas Eve sleepover in my little sister’s room, and playing cards as a family. These are just some of the traditions that have weathered the storms of change that have passed over my home but this year we started a new tradition that I’d like to share. Christmas is a celebration of Christ’s birth and as tradition deems, we give gifts in symbolism of the gifts that the Wise men gave to the Savior. Giving presents is great and fun, but the greatest gift we can give to Christ is to render service to those in need.

Where’s My Brain? Today was “One of Those Days” that you hear everyone ambiguously speak of. Ya know…when you hair looks bad, you get a flat tire, and the boy you have a crush on tells you that you have a buger in your nose…yeah, one of those days. So…I was flying to Canada for a corporate gig. From the moment I woke up, everything I touched turned to disaster; but the deodorant stains on my shirt and my burnt toast seemed like “small potatoes” after the nice smiley-American-Airlines-lady asked me for my passport. Vent Session. I Will Survive. So, I play the fiddle for the Charley Jenkins country band, and last week we played at the “Stampin Up” National convention.

I didn’t think this would be a very big or exciting show, but when we ran onto that stage, we were in a huge auditorium filled with 2000 of the craziest, middle aged women I’ve ever seen. It was such a fun show until about half way through. According to plan, the lead singer says “Lindsey’s gong to be playing a little hip hop number for you,” and with that, the rest of the band left the stage. Prayers and Pants. Make a Difference No Matter What Role You Play. When I was in Kenya, I loved how everyone seemed to take such pride in what their work.

At the camps we stayed at, the hired workers were so awesome. Whether they were in charge of serving clearing plates from the tables or changing bed sheets, it was obvious that they did it to the best of their ability. I remember one man who would tell us the food menu every night. He spoke very little English and yet, he would carefully enunciate every syllable as he slowly went through what was for dinner. Give Challenge. Finding parking on BYU campus is impossible! Anytime between 9AM and 2PM, the parking lot is a ruthless jungle of wandering cars, prowling the asphalt in search of any opening. Birthday Miracle. Strings from Angels. I’ve been doing a lot of traveling through the past few months and while on the road I have learned that one kind stranger can make all the difference. Just last week I found myself in the tiny town of Wadena ND- population 4,000. 5 star vacation in a one star hotel (NYC)