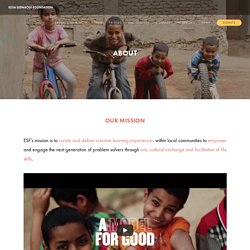 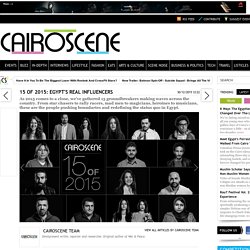 From star chasers to rally racers, mad men to magicians, heroines to musicians, these are the people pushing boundaries and redefining the status quo in Egypt. In a year where the word 'influencer' infiltrated the digital world with a vengeance, CairoScene wanted to highlight the real movers and makers of a society that is giving transformation a whole new meaning. These influencers do not spend their hours taking selfies, choosing an Instagram filter, or zealously seeking likes; they have been tirelessly working to transform Egypt’s human landscape, swimming against the current, shattering stereotypes, defying parental mandates, changing perceptions, exploring new frontiers, and designing the future of an Egypt that may not recognise its past façade.

23 Egyptian Women Who Made History. “The godmother of Egyptian Feminism”: Nawal El Saadawi. 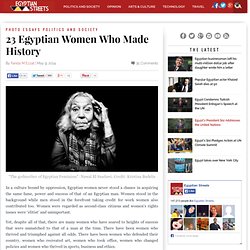 Credit: Kristina Budelis In a culture bound by oppression, Egyptian women never stood a chance in acquiring the same fame, power and success of that of an Egyptian man. Women stood in the background while men stood in the forefront taking credit for work women also contributed too. Women were regarded as second-class citizens and women’s rights issues were ‘elitist’ and unimportant. Yet, despite all of that, there are many women who have soared to heights of success that were unmatched to that of a man at the time. This is just a sample of kind of the women who existed and still exist in Egypt. Family Saving the Lives of Thousands of Migrants. 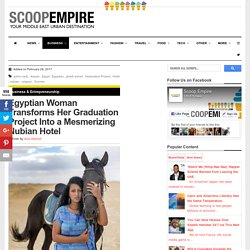 Ashari Narty is a craftsman and cultural center and hotel in Gharb-Soheil village in Aswan. This move came from a group of young Egyptians, who dare to dream in a country where nothing come easy. Via Tahrir News Via Yasser Ayman Soon, photos of young Egyptians surfaced on Facebook while creating the biggest origami wall in the Middle East. Via Yasser Ahmed. The LEGO® Story. Advice for women in their 20s. 13 Things You Should Give Up If You Want To Be Successful. كل ست من دول رائده اعمال ناجحه، بس. Awesome Quotes. Grey's Anatomy Quotes That Were All Too Real. Ashraf Hamdi's Latest 'Voice Note' Starring Tara Emad Will Make You Want to Call Your Ex. The latest instalment of actor/director/writer/filmmaker Ashraf Hamdi's Voice Note is here and you might want to have a box of tissues handy. 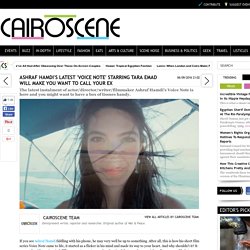 If you see Ashraf Hamdi fiddling with his phone, he may very well be up to something. After all, this is how his short film series Voice Note came to life, it started as a flicker in his mind and made its way to your heart. How Do You Know You're Ready To Get Married. “I do, do I?” 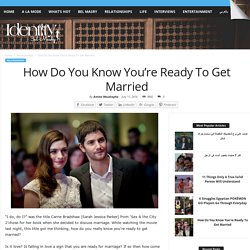 Was the title Carrie Bradshaw (Sarah Jessica Parker) from ‘Sex & the City 2’chose for her book when she decided to discuss marriage. 2016 5 Inspiring Egyptian Women. They say it’s a male dominated society, but these 5 Egyptian women switched this all around with their achievements! These women proved that power, strength and determination know no gender!

1- Rana EL Kaliuoby (Twitter: @kaliouby) Rana El Kaliuoby, Ph.D, Chief Science Officer and co-founder of Affectiva, an MIT Media Lab spin-off, Kaliouby says she is “on a mission to bring emotion intelligence to our devices and digital experiences.” She is also passionate about empowering women to pursue STEM careers, in addition to this she holds board positions at the American University in Cairo and TechWadi. Entrepreneur magazine called Kaliouby one of “The 7 Most Powerful Women To Watch in 2014,” and the MIT Technology Review included her in their list of the “Top 35 Innovators Under 35.” Things you'll regret doing in your 20s. Things People Over 20 Should Stop Doing. Here are 20 things people over 20 should stop doing. 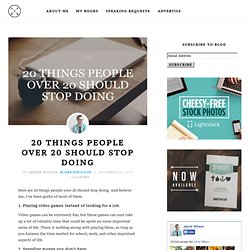 And believe me, I’ve been guilty of most of them. 1. Playing video games instead of looking for a job. Men Explain What Makes Her The One. Things Working Women Should Never Email. By now, you’ve likely heard about the essay Jennifer Lawrence wrote for the Lenny newsletter discussing the gender pay gap earlier this week. 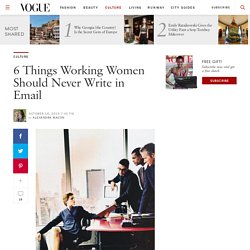 If not, here’s a quick synopsis: JLaw explained that after the Sony hack—which leaked emails showing she took home a lot less money than her American Hustle male costars Jeremy Renner, Christian Bale, and Bradley Cooper—she was mad. Not at Sony necessarily, but at herself. “I failed as a negotiator because I gave up early,” Lawrence wrote. She goes on to add that she didn’t barter aggressively because she didn’t want to be perceived as abrasive, but concludes by writing: “I’m over trying to find the ‘adorable’ way to state my opinion and still be likable!”

Amen, sister. Things Every Woman Must Have Realized at 25. You are at the point in your life where and when you feel that you are 100% an adult. 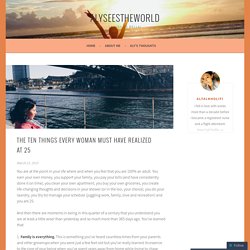 You earn your own money, you support your family, you pay your bills (and have consistently done it on time), you clean your own apartment, you buy your own groceries, you create life-changing thoughts and decisions in your shower (or in the loo, your choice), you do your laundry, you (try to) manage your schedule (juggling work, family, love and recreation) and you are 25.