50 Things You Need To Give Up Today 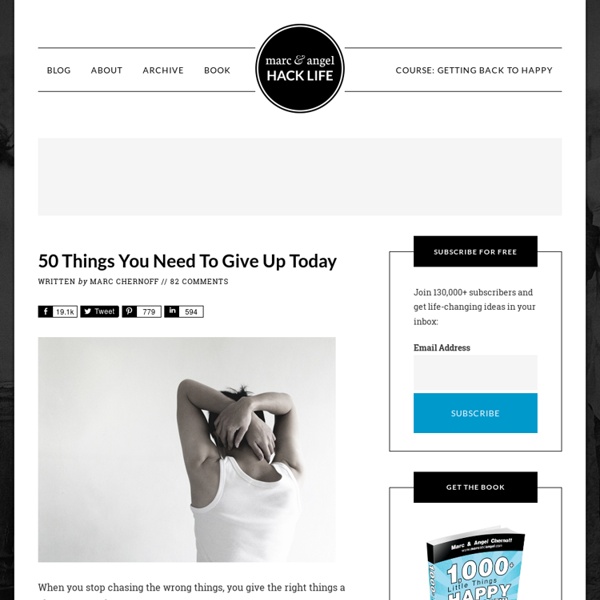 When you stop chasing the wrong things, you give the right things a chance to catch you. So starting today… Give up trying to be perfect. – The real world doesn’t reward perfectionists, it rewards people who get things done. Read Getting Things Done.Give up comparing yourself to others. – The only person you are competing against is yourself.Give up dwelling on the past or worrying too much about the future. – Right now is the only moment guaranteed to you. Right now is life. Don’t miss it.Give up complaining. – Do something about it.Give up holding grudges. – Grudges are a waste of perfect happiness.Give up waiting. – What we don’t start today won’t be finished by tomorrow. And remember, mistakes make us human, failures help us grow, hope keeps us going and love is the reason we’re alive. Photo by: Ai-lueh Chen Related 60 Empowering Quotes to Help You Get Things Done July 27, 2012 In "Aspirations" 10 Things You Must Give Up to Be Successful June 4, 2012 30 Things to Start Doing for Yourself

Maybe ? Maybe. . .we were supposed to meet the wrong people before meeting the right one so that, when we finally meet the right person, we will know how to be grateful for that gift. Maybe . . . when the door of happiness closes, another opens; but, often times, we look so long at the closed door that we don’t even see the new one which has been opened for us. Maybe . . . it is true that we don’t know what we have until we lose it, but it is also true that we don’t know what we have been missing until it arrives. Maybe . . . the happiest of people don’t necessarily have the best of everything; they just make the most of everything that comes along their way. Maybe . . . the brightest future will always be based on a forgotten past; after all, you can’t go on successfully in life until you let go of your past mistakes, failures and heartaches. Maybe . . you should always try to put yourself in others’ shoes.

On Self-Respect: Joan Didion’s 1961 Essay from the Pages of Vogue Here, in its original layout, is Joan Didion’s seminal essay “Self-respect: Its Source, Its Power,” which was first published in Vogue in 1961, and which was republished as “On Self-Respect” in the author’s 1968 collection, Slouching Towards Bethlehem.​ Didion wrote the essay as the magazine was going to press, to fill the space left after another writer did not produce a piece on the same subject. She wrote it not to a word count or a line count, but to an exact character count. Once, in a dry season, I wrote in large letters across two pages of a notebook that innocence ends when one is stripped of the delusion that one likes oneself.

60 Ways To Make Life Simple Again When we were young life was easier, right? I know sometimes it seems that way. But the truth is life still is easy. It always will be. 6 Logical Fallacies That Cost You Money Every Day Throws Good Money After Bad The competitive instinct is not just a phrase football commentators invented to give words to the tingly feeling they get watching Brett Favre play football. Our brain's natural tendency towards competition is arguably the reason your family survived the hunter gatherer knife fight of 2000 BC. And as countless uninspired armies and poorly coached teams have demonstrated throughout the years, your ability to compete tends to be directly proportional to your ability to convince yourself that you're doing the right thing. This leaves us with a brain that loves to compete, and is awesome at convincing itself that it's right. In the financial realms, when these two instincts collide, your brain will play a retarded game of chicken with reality that economists have termed "irrational escalation of commitment".

18 Chances You Will Not Regret Taking in Life In life you get just about as many chances as you’re willing to take. Almost two decades ago, when I told my grandmother I was worried about taking a chance and regretting my choice, she hugged me and said, “Trust me, honey, that’s not what you’re going to regret when you’re my age. If anything, you will likely kick yourself a little for not taking more chances on the infinite number of opportunities you have today.”

There's no speed limit. (The lessons that changed my life.) Whether you're a student, teacher, or parent, I think you'll appreciate this story of how one teacher can completely and permanently change someone's life in only a few lessons. I met Kimo Williams when I was 17 - the summer after I graduated high school in Chicago, a few months before I was starting Berklee College of Music. I called an ad in the paper by a recording studio, with a random question about music typesetting. When the studio owner heard I was going to Berklee, he said, “I graduated from Berklee, and taught there for a few years, too. I'll bet I can teach you two years' of theory and arranging in only a few lessons. 5 Tips to Make Work Your Happy Place When you think “happy place,” your mind probably conjures up a sandy beach or a quiet mountaintop, an elegant outdoor café or maybe just your cozy bed on a cold winter morning—pretty much anywhere but your workplace. A happy place is where you feel the most calm, comfortable and at ease. Even if you love what you do, the deadlines, duties and long hours spent at the office (or wherever you work) can result in stress, which in turn wreaks havoc on your body and mind. We can’t turn work into play, but we can uncover little tweaks and easy practices that will make your workweek a whole lot brighter. 1. Make friends—it's worth the effort

10 Articles That Changed My Life It’s easy to find a well written article. It’s not always easy to find a well written article with genuine value. That’s because the Internet has nearly limitless value — you can use it to look up the correct spelling of a word, or to translate text between languages, or even figure out “what’s the name of that guy from that movie who was in that other movie?” 22 Killer Personal Development Resources You're Missing Out On You’ve got the personal development itch once again. You know the feeling. Maybe you want to be more productive, finally tackle that goal of yours, or start waking up earlier. So you go to Google or your favorite personal development blogs. Maybe if you still haven’t found what you’re looking for you try searching for a Youtube video or ask your Facebook friends if they know of any good sites. And that’s it.