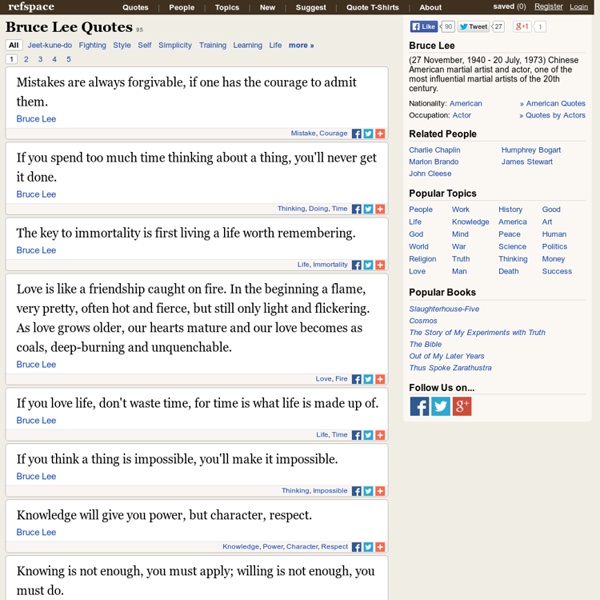 How to Get Bruce Lee Like Strength Without Ever Going to a Gym Article by Zen Habits contributor Jonathan Mead; follow him on twitter. “Empty your mind, be formless, shapeless – like water. Now you put water into a cup, it becomes the cup, you put water into a bottle, it becomes the bottle, you put it in a teapot, it becomes the teapot. Now water can flow or it can crash. Be water, my friend.” – Bruce Lee Bruce Lee was a paragon of cool and an icon of the ultimate bad-ass. HowStuffWorks "How Verbal Self-Defense Works" Lots of people think verbal self-defense means fighting back. Their image of verbal self-defense is a collection of killer smart cracks plus strategies for using language to wipe the floor with their opponents. It's not an accurate image. In this edition of How Stuff Works, I'd like to show you a different way to relate to other people, especially when you disagree. Let's talk about it a minute. Why Verbal Self-Defense?

10 Mind-Blowing Theories That Will Change Your Perception of the World Reality is not as obvious and simple as we like to think. Some of the things that we accept as true at face value are notoriously wrong. Scientists and philosophers have made every effort to change our common perceptions of it. Top 10 Lessons Learned from Bruce Lee … for Business or Life By J. D. Meier The Unbreakable® Walking-Stick Umbrella Rotator powered by <strong>EasyRotator for WordPress</strong>, a free and easy jQuery slider builder from DWUser.com. Please enable JavaScript to view.<br /> The Unbreakable® Umbrella protects against rain and everything else….

How the Enneagram Personality System Works This explanation covers the basics that you will need to understand how the Enneagram works, and will be especially helpful for beginners. As you will see, only a few simple concepts are needed to begin your journey of self-discovery. The Enneagram, however, is ultimately subtle and complex, as you will appreciate the more you use it in your life. For more guidelines, consult Personality Types 27-55, and for further clarifications Understanding the Enneagram, 11-30. Index of Subjects:

Exhibit shows Bruce Lee still larger than life 30 years after his death In life, Bruce Lee didn't like to be called a "star." In death, Lee can't escape the word. Thirty years after he died, the first Asian American to star in a Hollywood film still is considered to be one of the greatest martial artists ever. His primal physicality and screen intensity exploded American interest in martial arts movies, paving the way for later stars such as Jackie Chan, Chuck Norris and Steven Seagal. In Seattle, where Lee lived for 4 1/2 years and is buried, the new "Bruce Lee Collectors Exhibit 2003: The Beginning of a Legend, the Story of a Man," opens today with items from one of the biggest collectors of Bruce Lee memorabilia.

11 Key Differences Between Training and the Real Thing Image by cfoto I'm sure most (if not all), readers of Low Tech Combat train with a view to being able to apply what they practise in training, in real life. That is the ultimate goal. We train using only the most effective systems and strategies we know of so that if one day we get into a physical encounter and cannot avoid or evade it, we can use these skills under stress to stop the threat. We all know that the training environment is quite different to the environment we will likely find ourselves in if we ever have to use these skills for real.

Enneagram History and Origins: The Traditional Enneagram Click here for The Stages of the Work The Enneagram of Personality Types is a modern synthesis of a number of ancient wisdom traditions, but the person who originally put the system together was Oscar Ichazo. Ichazo was born in Bolivia and raised there and in Peru, but as a young man, moved to Buenos Aires, Argentina to learn from a school of inner work he had encountered. Thereafter, he journeyed in Asia gathering other knowledge before returning to South America to begin putting together a systematic approach to all he had learned.