The Amazing Art of Disabled Artists 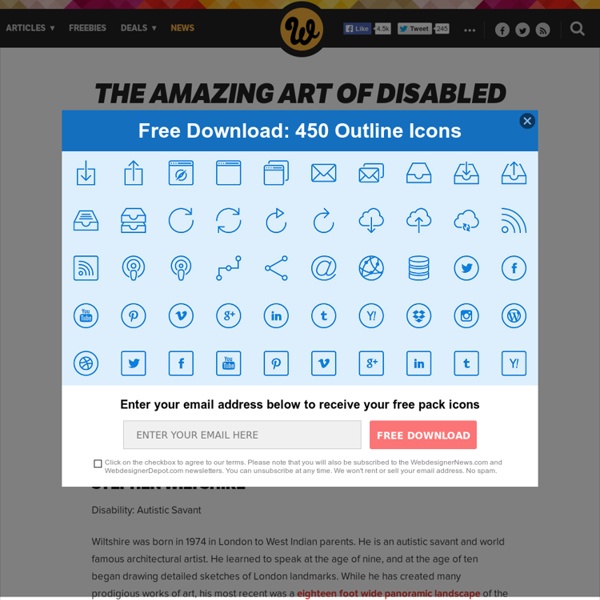 Some of the best artists deal with disabilities in their everyday lives that the rest of us can’t even imagine living with, and use art to communicate with the world. The results are often stunning. We’ve collected biographies and sample pieces from outstanding disabled artists, both famous and lesser-known. The artists below paint with their hands, their mouths and their feet. Many are blind or suffer from mental disabilities, yet they produce some of the most beautiful and intricate artwork that you can imagine. Their achievements are arguably epic in the face of the adversity that they face. We hope that the artists in this post inspire your designs and make you look at adversity in any field as a surmountable obstacle. Stephen Wiltshire Disability: Autistic Savant Wiltshire was born in 1974 in London to West Indian parents. Maria Iliou Disability: Autistic Maria Iliou is a Greek artist with autism spectrum disorder. Joseph Cartin Disability: Bipolar Peter Longstaff Disability: Missing Both Arms Related:  Inspiring • MISH MASH ~ these need to be filed proprly too

Artrage Home A Blind GIF Artist Visualizes His Lost Sight A Tribute to Adam Martinakis by GameL +Adam Martinakis source: 3DVF.com/GameL. GIF animation by George RedHawk. Before becoming an unlikely viral GIF art sensation, George Redhawk worked in various areas of medicine, instructing on subjects such as x-ray technology and, rather surprisingly, phlebotomy. As he tells The Creators Project, he had a fairly productive life doing that. Then, suddenly, Redhawk lost his sight, destroying his career and life in the process. "Light Is Time" a collaboration between Citizen watch & Tsuyoshi Tane (DGT). Out of desperation, Redhawk began using his remaining sight to find everything beautiful that he could commit to memory — to, as it were, take it with him. This newfound appreciation of art led him to various artists online, and into the world of GIFs, particularly of the morphing variety. Original black & white art by Federico Bebber. “It’s an artistic expression of the confusion I go through with my vision loss,” Redhawk says. Related:

Australian Artist John Piccoli Creates Sculptures Out Of Old Wrenches John Piccoli is a 70 year-old man. He is also restricted to a wheelchair because he had polio as a young boy. But those two facts aren’t the most important things about this man. John is an artist. Not only is he an artist, but a very unique one at that. The Australian man doesn’t use paints or clays to create his pieces. You won’t believe the outcome. This is what he starts with. This is John Piccoli. And THIS is what he makes. It’s hard to believe something this beautiful was fashioned out of old wrenches. Lots of them. 30 years ago, John started making small garden sculptures from the wrenches he collected. He kept at it, honing his craft. Years later, he is still making sculptures for gardens… But now, they are large-scale pieces. And the places accepting his works are museums and galleries. The Leaping Fish A Fisherman and Net The Warrior Horse and Cart A close-up of the large cart. Two Mustangs Battling The Little Mermaid A Family of Deer The Love Seat. Via: The ReUse People of America

50 Clever Tutorials and Techniques on Traditional Drawing Advertisement Traditional drawing is certainly way harder than digital and it is true that people are able to progress much faster digitally, but one should learn the traditional type of drawing and painting before starting digital drawing, since it often lays out the foundation for screen design. This article contains a mixture of traditional drawing tutorials, drawing techniques and some methods for transforming and preparing your creations for screen design. Some are intermediate level and some are advanced tutorials that include general theory, useful tips, comic inspired art, sketch a pencil drawing, coloring processing, character sketching, shapes, proportional, perspective and much more. Traditional Drawing Tutorials Marilyn Portrait TutorialA truly fantastic drawing tutorial to learn how to draw a portrait of Marilyn Monroe with pencil. Portrait tutorialThis is a step by step tutorial on how to draw a realistic portrait. Traditional Drawing Tips & Techniques It's done.

Pastor Mia Wright: Inspiring People to Pursue Their Passion for Living Mia K. Wright is inspiring people around the globe to pursue their passion for living. Mia currently serves as co-pastor and Director of Ministry at The Fountain of Praise in Houston, Texas, along with her husband Pastor Remus Wright. Upon starting with a 100 member congregation in 1991, the couple has grown the ministry to over 20,000 members and counting. Mia is a powerful inspirational speaker who encourages others with uplifting messages, relevant life stories and life skills that apply in both the faith-based and private sector. In 2000, Mia followed through on a vision given to her by God to create a women’s conference that would be deeply impactful, inspirational, and transformational. For over a decade, the Metamorphosis Conference has positively impacted the lives of thousands of women. Each program creates a unique opportunity for women to be empowered to live a fulfilled life and positively change their lives.

Alain Laboile - La Famille I’m a father of six. Through my photographic work I celebrate and document my family life : a life on the edge of the world, where intemporality and the universality of childhood meet. Day to day I create a family album that constitutes a legacy that I will pass on to my children. My work reflects our way of life, revolving around their childhood. Though my work is deeply personal, it is also accessible, addressing human nature and allowing the viewer to enter my world and reflect on their own childhoods. — Alain Laboile

Draw Something, the amazingly addictive guess-my-sketch game Illustration by Alex Eben Meyer. It’s been four days since the FedEx guy dropped off my new iPad—four days during which I wanted to put the device through its paces and write up a comprehensive review. Well, that didn’t happen. Farhad Manjoo is a technology columnist for the Wall Street Journal and the author of True Enough. Follow Instead, like millions of other people, I went to the iPad’s App Store and downloaded the game Draw Something. Draw Something, which is available for both Apple and Android devices, sounds simple and, in some ways, unoriginal. What makes Draw Something so hard to resist? I suspect that Draw Something’s laxity on the rules contributes to its popularity. Like Words with Friends, Draw Something is asynchronous: When I draw a shark and send it over to you, you can figure it out at your leisure. For instance, take that shark. But in this pain comes pleasure. I support these changes, but I hope the company doesn’t lard up the game with a lot of extra baubles.

Why This Woman Left A Career In Finance To Pursue Her Passion For Yoga On Friday, May 2, Elizabeth Nurse took a leave of absence from her job in the world of financial accounting to pursue something very different: A career in nonprofit yoga. Nurse, a 26-year-old Boston resident, completed her 200-hour yoga teacher training two years ago, and since then she’s immersed herself in the world of yoga. From getting involved in as many yoga-related volunteer projects as possible to posting photos of her practice on Instagram, Nurse found herself increasingly dedicated to yoga as time went on. “Sometimes I felt like [yoga] was my life,” Nurse told The Huffington Post. A year before leaving her job, Nurse started Yogella, a nonprofit that provides online yoga classes and plans charity events to raise money for worthy causes. Getting Started As an analytical and logical person by nature, Nurse knew she couldn’t say goodbye to her stable job and great health benefits without a plan -- so she started small. A Huge Wakeup Call Taking It To The Next Level

(7) Tin Man Photography The inspiring stories of three women who use Skype to pursue their passions and accomplish their dreams ‘Following Heart’ is a series of stories of women from around the world who use technology to pursue their passions. Three inspiring video stories were created by brothers Jack and Finn Harries under their ‘JacksGap’ project in collaboration with Skype -- you can check out the videos below. The first Following Heart episode follows the story of Danielle Turano, a musician and violin teacher in New York City. “I do have a dream, everyone has a dream. The second episode in the story is of a shark conservationist in the Bahamas. Check out her video story below which features some magnificent underwater footage of sharks swimming alongside Morris in peaceful serenity. The third and final video of the Following Heart series follows Leslie Watts, an artist that sees beauty in people that others might not. “[By using Skype], those being painted have the flexibility to work around their own schedules and pose in the comfort of their own homes,” – Finn Harries

Jennifer Trask Sculpts Delicate Objects Out Of Bones Artist Jennifer Trask counts bone as one of the media used in her elaborate sculptures. Bending, carving, and gilding, she constructs bouquets of antlers, gold, and other found objects, some dating as far back as the 18th century. There is a certain level of awe that comes from viewing these labored works as Trasks crafts delicate flowers out of material that we only know as being stiff and obtuse. She emphasizes craft, while at the same time making things ghostly realistic. The process is undoubtedly important to her work.

Related:
Related:  Inspiring   -  MISH MASH ~ these need to be filed proprly too