The new Science: We are made of Energy, not Matter. The new science also accepts that the universe, including us, is made up of energy, not matter. 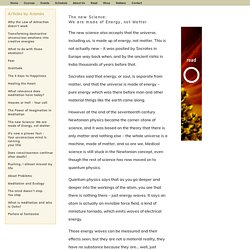 This is not actually new – it was posited by Socrates in Europe way back when, and by the ancient rishis in India thousands of years before that. Socrates said that energy, or soul, is separate from matter, and that the universe is made of energy – pure energy which was there before man and other material things like the earth came along.

However at the end of the seventeenth century Newtonian physics became the corner-stone of science, and it was based on the theory that there is only matter and nothing else – the whole universe is a machine, made of matter, and so are we. Medical science is still stuck in the Newtonian concept, even though the rest of science has now moved on to quantum physics. Quantum physics says that as you go deeper and deeper into the workings of the atom, you see that there is nothing there – just energy waves. JR: My wish: Use art to turn the world inside out. John Maeda: Designing for simplicity. Why Sex Really Matters: David Page at TEDxBeaconStreet. Brillant minds ?!

Management, Leadership & Communications. How leaders inspire. For early man, walking beat talking. It was once assumed that the intellect led from the front; that an already clever primate stood up at a time when apes had become, in some senses, men. 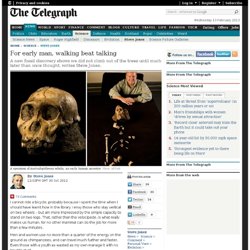 However, when the Australopithecus Lucy, whose 40th (and 3.2 millionth) birthday will soon be celebrated, was found, the scraps of her skeleton – which included skull, pelvis and a leg – proved that she too could attain the vertical, limited in the cranial department as she was. There are also hints that the ability to stand had emerged a million years earlier, in a primate with a brain no larger than a chimpanzee.

Living an upright life did not, that suggested, demand much intellectual effort. Walking, it seemed, came long before thinking. Human children, by contrast, have a downward-facing socket that begins to point out to the side as they grow. The first shoulder that looks human is from the Turkana Boy, born 1.8 million years ago. The new way of life called for shifts in both body and mind. Powered by Intuition. Life on Pinterest. So true on Pinterest. Making a difference: Oxford University Social Enterprise Award scheme 2014. Infinite Abundance! I was helping people change their lives every single day, but I didn’t believe it was HONORABLE or A REAL JOB to just help people find happiness (another money block: Because money can’t buy love, there needed to be a strict separation of the two!) 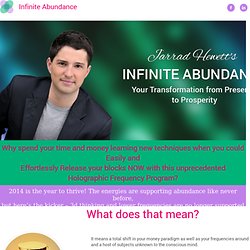 , and so my frequency couldn’t allow the abundance to flow. I could not make money doing what I loved because my frequencies were tuned into too many limitations! Isabelle Padovani. Toutes les nouveautés sur la tournée des Rencontres au coeur du Vivant "Au coeur des différenciations-clefs" animée par Isabelle Padovani pour la saison 2016-2017. 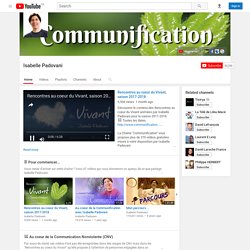 Wences Casares: The Reluctant Serial Entrepreneur. In the land of Silicon Valley where people thrive on thinking of fancy and glamorous ways to describe their jobs, Wences Casares is a fan of stripping away the shine. ”I often feel that being an entrepreneur is a fancy way of saying you are a doer,” says Casares in a phone interview. 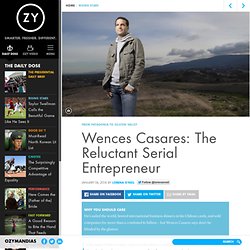 “Entrepreneurs are really good at getting things done.” To say the 39-year-old Argentine has “done” a lot would be an understatement. He’s sold multiple companies for a combined total of more than $1 billion. His first company became Argentina’s first internet service provider. Ayah Bdeir, CEO of littleBits. Manuel Valls is not your typical Socialist. 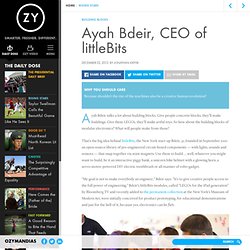