Young People Explain the Side-Effects and Consequences of Taking ADHD Meds. Alex Pietrowski, Staff WriterWaking Times America is being flooded with prescription pharmaceuticals, and in many cases, as we continue to learn, their stated benefits end up being overshadowed by costly side-effects and even lasting damage. 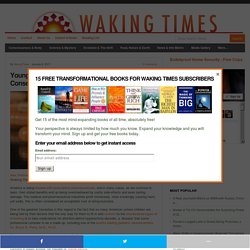 The medical and pharmaceutical industries profit immensely, often knowingly causing harm, yet sadly, this is often considered an acceptable cost of doing business. One of the greatest travesties in this regard is the fact that so many American school children are being told by their doctors that the only way for them to fit in and conform to the standardized rigors of schooling is to take medications for attention-deficit-hyperactivity-disorder, a ‘disease’ that some professional consider to be a made up, including one of the world’s leading pediatric neuroscientists, Dr. Bruce D. Perry, M.D., Ph.D. First Hand Accounts of Living on ADHD Meds Final Thoughts Read more articles from Alex Pietrowski. About the Author. 4 Facts About ADHD That Teachers & Doctors Never Tell Parents. We're creating a positive news network. 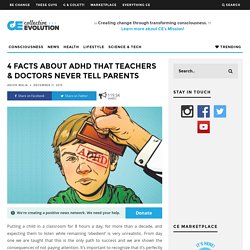 We need your help. Putting a child in a classroom for 8 hours a day, for more than a decade, and expecting them to listen while remaining ‘obedient’ is very unrealistic. From day one we are taught that this is the only path to success and we are shown the consequences of not paying attention. It’s important to recognize that it’s perfectly normal for children to struggle with paying attention to something that they are not even remotely interested in; this doesn’t necessarily mean they have a disorder and it doesn’t mean they require (potentially quite harmful) prescription medications. It’s Okay If Your Child Struggles With Attention – This Does’t Mean They Have A Disorder Many doctors and teachers are already aware of this, but I would like to reiterate the point — just because your child struggles with paying attention in school or sitting still in the classroom does not mean there is an underlying disorder to blame. New Evidence Links Fluoride to Increasing Cases of ADHD. The evidence from a new scientific research study shows that children who live in water districts where the water supply is systematically fluoridated suffer with ADHD at a significantly higher rate. 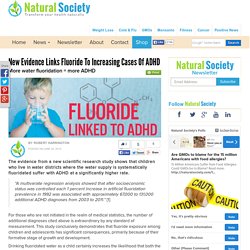 “A multivariate regression analysis showed that after socioeconomic status was controlled each 1 percent increase in artificial fluoridation prevalence in 1992 was associated with approximately 67,000 to 131,000 additional ADHD diagnoses from 2003 to 2011.” [1] For those who are not initiated in the realm of medical statistics, the number of additional diagnoses cited above is extraordinary by any standard of measurement. ADHD drugs greatly decrease academic performance in children, study finds. By Ethan A. 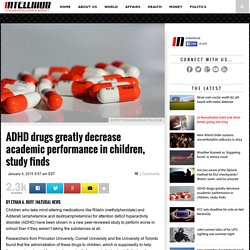 Huff | Natural News Children who take mind-altering medications like Ritalin (methylphenidate) and Adderall (amphetamine and dextroamphetamine) for attention deficit hyperactivity disorder (ADHD) have been shown in a new peer-reviewed study to perform worse in school than if they weren’t taking the substances at all. Researchers from Princeton University, Cornell University and the University of Toronto found that the administration of these drugs to children, which is supposedly to help them remain calm and focus in class, actually leaves students at a deficit when it comes to paying attention and learning in a formal academic setting.

These shocking findings, which were published recently in the Journal of Health Economics, reveal that increasing the use of stimulants isn’t helping children any more than loading them up with anti-psychotic medications helps them think more rationally. Psychologist L. Sources: This article originally appeared on Natural News. Mental Handcuffs - A Kid's View of ADHD Medications. Sigmund Fraud, Staff WriterWaking Times What is it like to be a ‘below average’ student in a culture that increasingly drugs children to induce conformity? 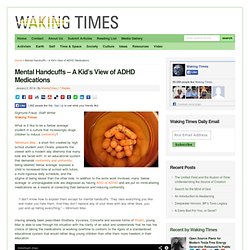 ‘Minimum Max’, a short film created by high school student Josh Ovalle, presents the viewer with a modern day dilemma that many kids are faced with. In an educational system that demands conformity and uniformity, being labelled ‘below average’ exposes a child to increased time at school with tutors, a more rigorous daily schedule, and the stigma of being lesser than the other kids. In addition to the extra work involved, many ‘below average’ or unmanageable kids are diagnosed as having ADD or ADHD and are put on mind-altering medications as a means of correcting their behavior and inducing conformity. “I don’t know how to explain them except for mental handcuffs. About the Author. ADHD a ‘Fictitious Disease’ Says the Creator of the Ailment. Mike Barrett, Natural SocietyWaking Times Did you know that The American Psychiatric Association estimates that 3%-7% of school-aged children have ADHD, while parents report that about 9.5% of children between 9- and 7 years old suffer from the condition? 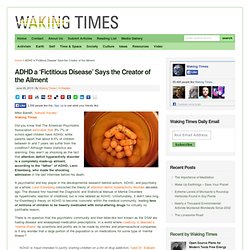 Although these statistics are alarming, they aren’t as shocking as the fact that attention deficit hyperactivity disorder is a completely made-up ailment, according to the “father” of ADHD, Leon Eisenberg, who made the shocking admission in the last interview before his death. A psychiatrist and key player in the developmental research behind autism, ADHD, and psychiatry as a whole, Leon Eisenberg concocted the theory of attention deficit hyperactivity disorder decades ago. The disease first haunted the Diagnostic and Statistical Manual of Mental Disorders as hyperkinetic reaction of childhood, but is now labeled as ADHD. 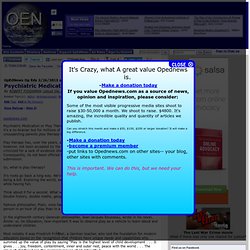 For me it's a no-brainer but for millions of unsuspecting parents play therapy is just not an option. Why? Play therapy has, over the years, steadily grown in popularity among clinicians. ADD - ADHD - Natural & Alternative Medicine Solutions For Attention Deficit Hyperactivity Disorder. Attention Deficit Hyperactivity Disorder (ADHD/ADD): Home Remedies. Home Remedies Discover more about home remedies and ADHD to control ADHD symptoms, including alternative therapies. 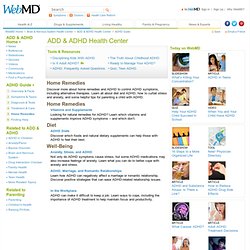 Learn all about diet and ADHD, how to curtail stress and anxiety, and some helpful tips for parenting a child with ADHD. Looking for natural remedies for ADHD? Learn which vitamins and supplements improve ADHD symptoms -- and which don't. Diet. Ritalin danger! ADD and ADHD Natural Alternatives. Forced Drugging of Children has gotten out of Hand Peter R. 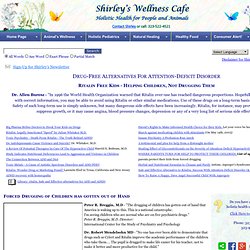 Breggin, M.D - "The drugging of children has gotten out of hand that America is waking up to this. ADD - Attention Deficit Disorder - Hyperactivity - ADHD - Holistic Medicine. By Allen Buresz, D.C. 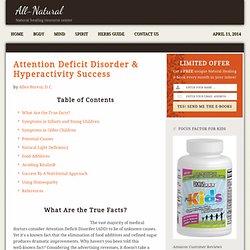 Table of Contents What Are the True Facts? Natural ADHD Treatments. 8 Ways to Treat ADHD Naturally. By Carrie Demers, MD, Yoga+ My eight-year-old son was just diagnosed with ADHD. My husband and I can’t decide if we should give him medication or pursue alternative treatments. What do you recommend? This is a tough dilemma for many parents. Natural ADHD Medicine - Official Site.

Synaptol FAQ Q: What is Synaptol? A: Synaptol is a liquid OTC medicine that uses a multi-tiered approach to safely and naturally relieve inattentiveness, hyperactivity, impulsivity, and poor concentration. We stabilize natural homeopathic active ingredients into our organic purified ionized mineral water complex.

IM-Home - drugfree-adhd-treatment. Many parents and adults are looking for ADHD treatments without medication. IM-Home has been at the forefront of non drug ADHD treatment. Backed by Scientific Research the IM-Home program is the only ADHD Brain Training device that is capable of actually rewiring your brain. Resetting your brain's internal timing mechanism has been shown to drastically improve attention, coordination and the ability to process information more efficiently.

Endorsed by medical professionals and ADHD specialists, the IM-Home program is literally the "at home" version of Interactive Metronome's flagship clinical device, used by over 20,000 doctors and medical specialists for over 10 years. What is the Interactive Metronome Program? Native Remedies® – Natural Health Remedies. ADHD Natural Remedy. If you are the parent of a child or teen diagnosed with attention deficit hyperactivity disorder, your physician will probably prescribed stimulant drugs as the solution.

Although these drugs may make your child settle down in class and be more compliant in the short term, there is no conclusive evidence that this will translate into better grades or academic performance. Also, all of these drugs have harmful side-effects with long-term use. Have you ever considered using an ADHD natural remedy instead? Native Remedies, Focus Formula Focus Formula has been used for many years to safely maintain health and systemic balance in the brain and nervous system. Focus Formula is a 100% safe, non-addictive, natural, herbal remedy.