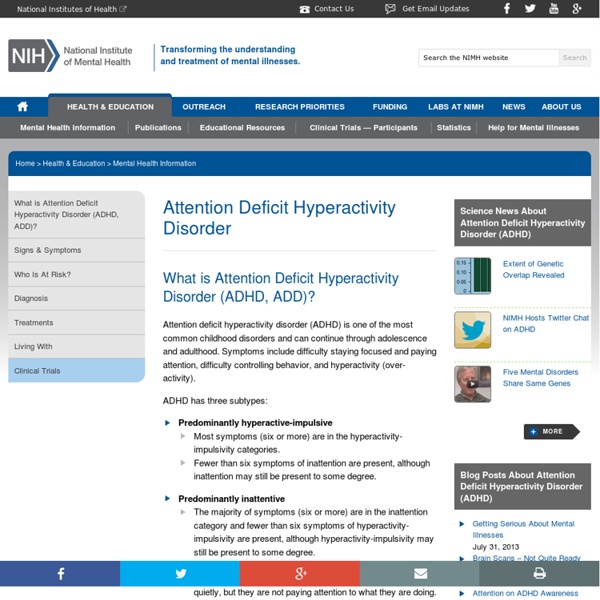 Diagnosis Children mature at different rates and have different personalities, temperaments, and energy levels. Most children get distracted, act impulsively, and struggle to concentrate at one time or another. No single test can diagnose a child as having ADHD. Between them, the referring pediatrician and specialist will determine if a child: Is experiencing undetected seizures that could be associated with other medical conditionsHas a middle ear infection that is causing hearing problemsHas any undetected hearing or vision problemsHas any medical problems that affect thinking and behaviorHas any learning disabilitiesHas anxiety or depression, or other psychiatric problems that might cause ADHD-like symptomsHas been affected by a significant and sudden change, such as the death of a family member, a divorce, or parent's job loss. The specialist also will ask: Are the behaviors excessive and long-term, and do they affect all aspects of the child's life? A learning disability. Treatments Related:  ADD/ADHD

Emotional / Behavior Disorders (EBD) ADHD Is Different for Women When you live in total squalor—cookies in your pants drawer, pants in your cookies drawer, and nickels, dresses, old New Yorkers, and apple seeds in your bed—it’s hard to know where to look when you lose your keys. The other day, after two weeks of fruitless searching, I found my keys in the refrigerator on top of the roasted garlic hummus. I can’t say I was surprised. I was surprised when my psychiatrist diagnosed me with ADHD two years ago, when I was a junior at Yale. In editorials and in waiting rooms, concerns of too-liberal diagnoses and over-medication dominate our discussions of attention deficit hyperactivity disorder, or ADHD. The New York Times recently reported, with great alarm, the findings of a new Centers for Disease Control and Prevention study: 11 percent of school-age children have received an ADHD diagnosis, a 16 percent increase since 2007. The idea that young adults, particularly women, actually have ADHD routinely evokes skepticism.

Symptoms of ADHD/ADD (Attention Deficit Hyperactivity Disorder) The symptoms of ADHD include inattention and/or hyperactivity and impulsivity. These are traits that most children display at some point or another. But to establish a diagnosis of ADHD, sometimes referred to as ADD, the symptoms should be inappropriate for the child's age and have a negative impact on the child's ability to function. Adults also can have ADHD; in fact, up to 2 out of every 3 kids with ADHD continue to have symptoms as adults. When ADHD persists into adulthood, symptoms may vary. Recommended Related to ADD-ADHD ADHD and Stress Does ADHDcause stress? Read the ADHD and Stress article > > Types of ADHD There are three different subtypes of ADHD, including: Combined ADHD (the most common subtype), which involves symptoms of both inattentiveness and hyperactivity/impulsivityInattentive ADHD (previously known as ADD), which is marked by impaired attention and concentrationHyperactive-impulsive ADHD, which is marked by hyperactivity without inattentiveness Symptoms of ADHD

ADHD: Executive Function Impairments A New Understanding of ADHD in Children and Adults: Executive Function Impairments by: Thomas E. Brown Preview the first 18 pages by clicking here Purchase this book here A new model of ADHD proposed by Thomas Brown, Associate Director of the Yale Clinic for Attention and Related Disorders in Yale’s Dept. of Psychiatry, explains why individuals with ADHD can focus very well for a few specific activities that strongly interest them or which threaten imminent unpleasantness, even though they have chronic difficulties in focusing for most other tasks, including some they recognize as important. Many who know persons with ADHD, even some professionals, assume that individuals with ADHD simply need to exercise “willpower” to make themselves apply their ability to focus in other areas where they need it. Dr. Why can those with ADHD focus very well on some tasks while having great difficulty in focusing on other tasks they recognize as important? Dr. Reprinted with permission. by

Tips from Dyslexic Students for Dyslexic Students From The Real Experts... Tips from Dyslexic Students for Dyslexic Students by Nancy Hall Nobody can fully appreciate what it’s like to be a student with dyslexia in the way that another student with dyslexia can. Abbie, 14, says her best homework strategy is a simple one. For dyslexics who read more slowly and who sometimes can’t even read their own handwriting, allowing enough time to do homework is a must. Break a big project up into smaller, less intimidating pieces. Thirteen-year-old Eli, for instance, has a friend who studies by making a Power Point presentation on her computer of the material she’ll be tested on. Here are some other high-tech tips from Eli and other kids: After you complete a writing assignment, whether it’s a paragraph or a longer paper, record yourself or someone in your family reading it aloud. Find a computer that can read to you—Macs do this, but there’s lots of software available for both Macs and PCs that read along with you. Other Ideas?

Adult ADHD Test | ADDA - Attention Deficit Disorder Association | ADDA - Attention Deficit Disorder Association Adult Attention Deficit Hyperactivity Disorder (ADHD) is a relatively common, often unrecognized condition. It affects 4.4% of U.S. adults, but most adults with ADHD live with the symptoms and suffer the often-devastating effects of ADHD in their lives without identifying the source of their struggles. Instead, their difficulties are attributed to their own shortcomings. Once diagnosed, many adults are happy to learn that they do not have a character flaw as aptly described in the title of one popular book on ADHD, “You Mean I’m Not Lazy, Stupid or Crazy?!” Adult ADHD Exists Many adults who suffer from untreated ADHD avoid diagnosis or treatment due to the negative stigma associated with ADHD. Regardless of the stigma surrounding ADHD, knowing about your adult ADHD is preferable to struggling unawares. It’s Better to Know An ADHD diagnosis is not a death sentence, nor does it guarantee a lifetime of taking pills. The World Health Organization Adult Self-Report Scale (ASRS) Screener