Overdiagnosis of Attention-Deficit/Hyperactivity Disorder in Children and Adolescents - PMC. Brain Stimulation and ADHD / ADD: Cravings and Regulation. Advances in technology are offering us an increasingly bigger window into the neurological bases of ADHD. 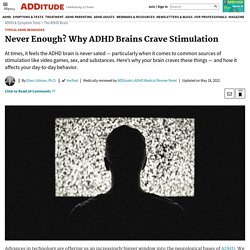 We now know that differences in structure, functionality, activation, and connectivity all come into play. The key to understanding your behaviors — why you act the way you do — is to understand the needs and wants of your unique brain. How French media have portrayed ADHD to the lay public and to social workers. Updated European Consensus Statement on diagnosis and treatment of adult ADHD. S.J. 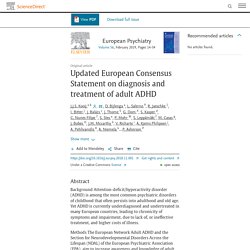 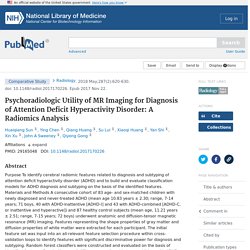 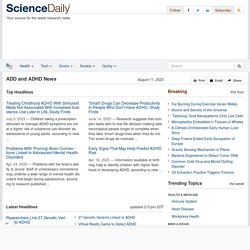 Researchers said the approach ... Interactive Avatar Boosts Performance of Children With ADHD Sep. 26, 2019 — A new study has shown that an interactive avatar, which gives both instructions and feedback on the attention of the learner, can improve the performance of ADHD children on a complex problem-solving ... State Variability in ADHD Prevalance. Editorial: The Functional Anatomy of the Reticular Formation. The brainstem reticular formation (RF) represents the archaic core of those pathways connecting the spinal cord and the encephalon. 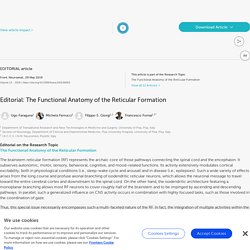 It subserves autonomic, motor, sensory, behavioral, cognitive, and mood-related functions. Its activity extensively modulates cortical excitability, both in physiological conditions (i.e., sleep-wake cycle and arousal) and in disease (i.e., epilepsies). Such a wide variety of effects arises from the long course and profuse axonal branching of isodendritic reticular neurons, which allows the neuronal message to travel toward the entire cerebral cortex and downstream to the spinal cord. On the other hand, the isodendritic architecture featuring a monoplanar branching allows most RF neurons to cover roughly half of the brainstem and to be impinged by ascending and descending pathways. 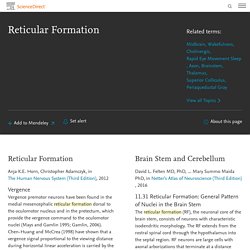 The word “reticular” is derived from the Latin word rete, meaning net, and refers to its characteristically diffuse structure, a network of loosely packed multipolar neurons, embedded in a dense neuropile. The reticular formation has no distinct cytoarchitectural boundaries, and forms the central core of the brainstem, in which other brainstem nuclei with clearly outlined cytoarchitectural boundaries, are embedded, e.g. the red nucleus (RPC) or nucleus reticularis tegmenti pontis (RtTg). It stretches throughout the length of the brainstem, from the mesencephalon through the pons to the medulla oblongata (Figure 9.1). In the spinal cord the intermediate zone, i.e.

Validity of the Executive Function Theory of Attention-Deficit/Hyperactivity Disorder: A Meta-Analytic Review - PubMed. One of the most prominent neuropsychologic theories of attention-deficit/hyperactivity disorder (ADHD) suggests that its symptoms arise from a primary deficit in executive functions (EF), defined as neurocognitive processes that maintain an appropriate problem-solving set to attain a later goal. 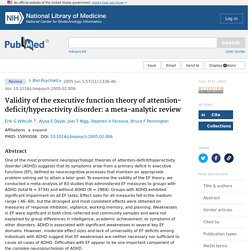 To examine the validity of the EF theory, we conducted a meta-analysis of 83 studies that administered EF measures to groups with ADHD (total N = 3734) and without ADHD (N = 2969). Groups with ADHD exhibited significant impairment on all EF tasks. Effect sizes for all measures fell in the medium range (.46-.69), but the strongest and most consistent effects were obtained on measures of response inhibition, vigilance, working memory, and planning. Response control correlates of anomalous basal ganglia morphology in boys, but not girls, with attention-deficit/hyperactivity disorder. Children and adults with Attention-Deficit/Hyperactivity Disorder cannot move to the beat. Attention-Deficit/Hyperactivity Disorder: A Historical Neuropsychological Perspective. ADHD Emotional Regulation across Lifespan. 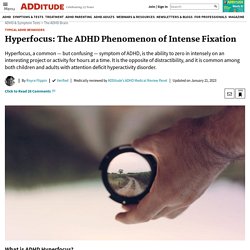 Hyperfocus refers to an intense fixation on an interest or activity for an extended period of time. People who experience hyperfocus often become so engrossed they block out the world around them. How I Get Shit Done Despite Having ADD: Here’s What You Can Learn From my Experiences. In my 20’s after some challenges at work, and the possibility of getting fired from yet another job, I went to see a psychiatrist and told him about my issues: Throughout the time I was in college, I couldn’t focus on a lecture and ended up with a lousy GPAI couldn’t sit still in a meeting for more than about 20 minutes before I completely zoned out.Despite the low volume of work I was assigned, I made mistakes, and many things frequently slipped through the cracks. 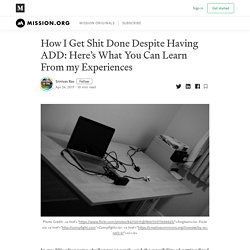 After my appointment, I got a diagnosis of attention deficit disorder. Despite medicating me, I still hated my job and my performance didn’t improve very much. Eventually, I left that job and went to business school. In terms of my attention span, not much has changed: When we have team meetings for Unmistakable Creative, my team members know that they’ll lose me after about 20 minutes. The one thing that has changed however is my ability to produce. So what exactly changed? 1) Plan your days the night before. Untitled. Untitled. Untitled. Untitled. 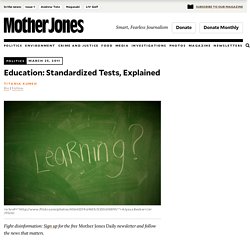 And in education circles, it happens a lot. Curious what a buzzword actually means? Or how a seemingly unrelated concept migrated into discussions about kids and schools? Let MoJo's education team research it so you don't have to. Help us decide what lingo to look at next by leaving suggestions in comments. This week's education primer: "STANDARDIZED TESTING. " It's springtime in the U.S. of A, which for millions of kids and teachers means just one thing: Standardized tests. What are "standardized tests," and when did they become required in the American public education system? What happens to test scores once they're collected? Once state test scores are in, NCLB requires states to separate scores based on students' ethnicity, gender, and socioeconomic status.

How are students directly impacted by their scores? It depends on the school, but they're frequently not. How are teachers and schools impacted by student scores? It depends on the state. 2013452. Medicated. Skip directly to search Skip directly to A to Z list Skip directly to navigation Skip directly to page options Skip directly to site content Information For... ADHD HomepageData & Statistics. Overdiag. The Not-So-Hidden Cause Behind the A.D.H.D. Epidemic. Photo Between the fall of 2011 and the spring of 2012, people across the United States suddenly found themselves unable to get their hands on A.D.H.D. medication. Low-dose generics were particularly in short supply. There were several factors contributing to the shortage, but the main cause was that supply was suddenly being outpaced by demand. The number of diagnoses of Attention Deficit Hyperactivity Disorder has ballooned over the past few decades.

Before the early 1990s, fewer than 5 percent of school-age kids were thought to have A.D.H.D. That amounts to millions of extra people receiving regular doses of stimulant drugs to keep neurological symptoms in check. Probably not. Which is not to say that A.D.H.D. is a made-up disorder. Sociol. Dr. Leon Eisenberg — ADHD Is a 'Fictitious Disease'? Claim: Dr. Leon Eisenberg, the 'father' of ADHD, said just before his death that ADHD 'is a prime example of a fictitious disease.' Examples:[Collected via e-mail, May 2013] I've been seeing this story making the rounds about how the alleged "inventor" of ADHD (a had a sort of deathbed confession, and, in an interview with Der Spiegel before he died at 87, said, "ADHD is a prime example of a fictitious disease.

" Leon Eisenberg, the father of ADHD, is quoted as saying in Der Spiegel that "ADHD is a fictitious disease" (shortly before his death). Correlation_example. Copyright © Michael Richmond. This work is licensed under a Creative Commons License. Michael Richmond Mar 22, 2009 A recent discussion on the Sons of Sam Horn website focused on the question, "How important is defense in baseball? " ⚡Presentation "The ADHD Explosion Part 1: Causes, Models, Rising Prevalence, and Policy Implications Stephen P. Hinshaw University of California, Berkeley Help Group."

Is it really ADHD? Between fall 2011 and spring 2012, record numbers of Americans went to their pharmacies to fill prescriptions for Adderall, Ritalin and other stimulants, primarily to treat attention-deficit/hyperactivity disorder (ADHD), only to find the medications were sold out. Several factors contributed to the shortage, but the main reason was that demand had outpaced supply. The U.S. Drug Enforcement Agency reviewed and subsequently raised the quota for production of stimulants, but this shortage illustrates just how much ADHD diagnoses have ballooned over the past decade. What Causes the Rise of ADHD in Children? Is it really ADHD?

Overdiag. ADHD ADD ODD attention deficit hyperactivity disorder treatment. Howard Glasser is the founder of Children's Success Foundation and creator of The Nurtured Heart Approach™, which is being used in hundreds of thousands of homes and classrooms around the world. He is author of Transforming the Difficult Child, currently the top-selling book on the topic of ADHD; The Inner Wealth Initiative, one of the leading books on school interventions and his most recent book, YOU Are Oprah - Igniting the Fires of Greatness.