BPA Linked to Low Birth Weights in Baby Girls. Girls born to mothers with high levels of BPA in their system during the first trimester of pregnancy weigh less at birth than babies with lower exposure, according to a new study. 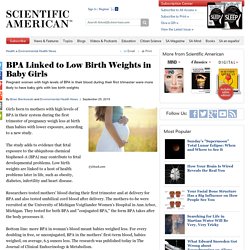 The study adds to evidence that fetal exposure to the ubiquitous chemical bisphenol-A (BPA) may contribute to fetal developmental problems. Low birth weights are linked to a host of health problems later in life, such as obesity, diabetes, infertility and heart disease. Researchers tested mothers’ blood during their first trimester and at delivery for BPA and also tested umbilical cord blood after delivery. The mothers-to-be were recruited at the University of Michigan Voigtlander Women’s Hospital in Ann Arbor, Michigan. They tested for both BPA and "conjugated BPA," the form BPA takes after the body processes it. Bottom line: more BPA in woman’s blood meant babies weighed less. Weight Loss And Exercise Combined With Birth Control Could Help Women With PCOS Get Pregnant. Women with polycystic ovary syndrome, a common condition in women known to cause infertility, could benefit from weight loss and exercise. 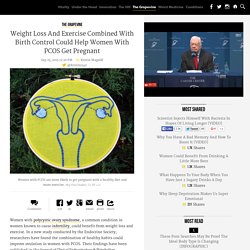 In a new study conducted by the Endocrine Society, researchers have found the combination of healthy habits could improve ovulation in women with PCOS. Their findings have been published in the Journal of Clinical Endocrinology & Metabolism. According to the Mayo Clinic, polycystic ovary syndrome is a common endocrine disorder among women, and the most common cause of infertility. In a woman who has PCOS, levels of androgens, or male sex hormones like testosterone are higher than normal, causing an increase in male traits.

For example, hormonal imbalances will often cause irregular menstrual periods due to lack of ovulation, weight gain, acne, excess hair on the face and body, or thinning hair on the head. “The findings confirm what we long suspected — that exercise and a healthy diet can improve fertility in women who have PCOS,” said Dr. 'Organic Pollutants' Linked to Gestational Diabetes. WEDNESDAY, Sept. 16, 2015 (HealthDay News) -- Women exposed to high levels of polychlorinated biphenyls (PCBs) in early pregnancy have a higher risk of developing gestational diabetes, new research from Greece suggests. 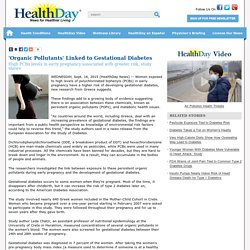 These findings add to a growing body of evidence suggesting there is an association between these chemicals, known as persistent organic pollutants (POPs), and metabolic health issues. "As countries around the world, including Greece, deal with an increasing prevalence of gestational diabetes, the findings are important from a public health perspective as knowledge of environmental risk factors could help to reverse this trend," the study authors said in a news release from the European Association for the Study of Diabetes.

Obesity at Pregnancy Linked to Diabetes Later. Action Points Note that this study was published as an abstract and presented at a conference. 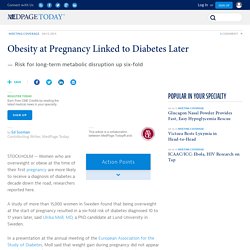 These data and conclusions should be considered to be preliminary until published in a peer-reviewed journal.Note that this observational study found that women who were overweight at the time of their first pregnancy had a substantially increased risk of diabetes in the following 10-17 years. STOCKHOLM -- Women who are overweight or obese at the time of their first pregnancy are more likely to receive a diagnosis of diabetes a decade down the road, researchers reported here. 'Organic Pollutants' Linked to Gestational Diabetes. Is Hormone Therapy a Safe Treatment for Menopause? For men, middle age brings the promise of little blue pills and little clear gel packs—Viagra and testosterone to combat the indignities of aging. 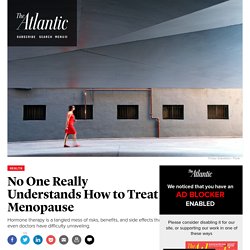 For women, when things get hot, complicated, and fuzzy, turning to hormones for relief is a trickier proposition. “It's like my brain is on spin,” says Kathy Kelley, the founder of the website Hyster Sisters, which offers resources for women going through hysterectomy and early menopause. Kelley had her uterus and ovaries removed when she was 41, and though she took estrogen to replace the hormones her ovaries used to produce, she says she felt an almost immediate change, a sort of brain fog. Among the community of users on her site, the stories were worse for those who decided to go off their hormones.

“We've seen it create some devastating effects for women [who are] afraid of taking hormone therapy when that's exactly what they need,” says Kelley. The symptoms of menopause were only recognized and named in the 1800s. Confused yet? IVF In The Age Of Precision Medicine. Pssst! Secret of Wrinkling, Folding, and CreasingTrending. The process of wrinkle formation is familiar to anyone who has ever sat in a bathtub a little too long. 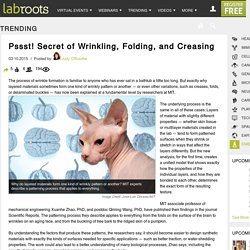 But exactly why layered materials sometimes form one kind of wrinkly pattern or another — or even other variations, such as creases, folds, or delaminated buckles — has now been explained at a fundamental level by researchers at MIT. Why do layered materials form one kind of wrinkly pattern or another? MIT experts describe a patterning process that applies to everything. Image Credit: Jose-Luis Olivares/MIT The underlying process is the same in all of these cases: Layers of material with slightly different properties — whether skin tissue or multilayer materials created in the lab — tend to form patterned surfaces when they shrink or stretch in ways that affect the layers differently.