Kids with ADHD must squirm to learn, study says. For decades, frustrated parents and teachers have barked at fidgety children with ADHD to "Sit still and concentrate! 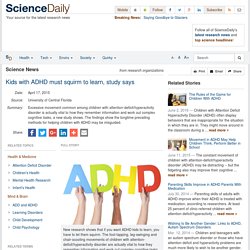 " But new research conducted at UCF shows that if you want ADHD kids to learn, you have to let them squirm. The foot-tapping, leg-swinging and chair-scooting movements of children with attention-deficit/hyperactivity disorder are actually vital to how they remember information and work out complex cognitive tasks, according to a study published in an early online release of the Journal of Abnormal Child Psychology. The findings show the longtime prevailing methods for helping children with ADHD may be misguided.

"The typical interventions target reducing hyperactivity. It's exactly the opposite of what we should be doing for a majority of children with ADHD," said one of the study's authors, Mark Rapport, head of the Children's Learning Clinic at the University of Central Florida. The study at the UCF clinic included 52 boys ages 8 to 12. ADHD Programs Catalog. The French Do Not Recognize ADHD for Pharma Drug Intervention – REALfarmacy.com. By PAUL FASSA The French don’t recognize ADHD (Attention Deficit Hyperactive Disorder) as a chemical imbalance that opens the Pandora’s Box of pharmaceutical drug addiction with harmful side effects. 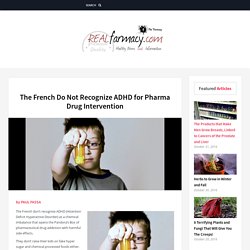 They don’t raise their kids on fake hyper sugar and chemical processed foods either. Instead, school kids are treated to chefs in training preparing lunch meals from nearby freshly grown produce and local livestock. In general, the French are more food health conscious than Americans. They believe in fresh well prepared food for all. The ADHD diagnosis rate in America is 19 percent. No doubt a lot of fake kiddie cereals that dominate our food aisles are eschewed in France also. And perhaps less TV with MTV type editing activity that prevails in much of our visual entertainment these days makes it easier to be more one pointed and patient. Instead, video games and TV watching are considered the safe way to raise kids. In 1998, Dr. What are oxalates? Should I be concerned about oxalates in my diet? SARAH VINE: ADHD and why we working mums need to look in the mirror. By Sarah Vine Published: 01:03 GMT, 12 March 2014 | Updated: 10:59 GMT, 12 March 2014 Fascinating stuff in yesterday’s Mail from paediatric neurologist Dr Richard Saul, who argues in a new book that Attention Deficit Hyperactivity Disorder is wildly over-diagnosed and that thousands of children are being identified as victims and treated with drugs they do not need. 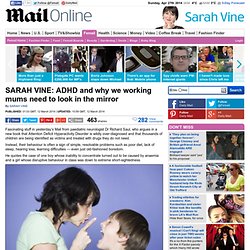 Instead, their behaviour is often a sign of simple, resolvable problems such as poor diet, lack of sleep, hearing loss, learning difficulties — even just old-fashioned boredom. He quotes the case of one boy whose inability to concentrate turned out to be caused by anaemia and a girl whose disruptive behaviour in class was down to extreme short-sightedness.

Attention: Sarah Vine says the problems lie not with the children but with the paucity of parenting. Their symptoms disappeared once the underlying problems had been solved. Saul’s analysis presents us with an inconvenient truth. Ask Unclutterer: Organizing and uncluttering strategies for people with ADHD and visual processors. Reader Shannon submitted the following to Ask Unclutterer: Do you have any tips for people with ADHD that go beyond the stuff you see or hear all the time in other publications? 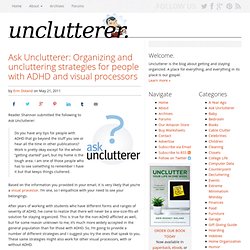 Work is pretty okay except for the whole “getting started” part, but my home is the tough area. I am one of those people who has to see something to remember I have it but that keeps things cluttered. Based on the information you provided in your email, it is very likely that you’re a visual processor. A Celebrity Death, Addiction, and the Media. 1.5K Flares1.5K Flares × It is always big news when a celebrity is stricken dead by a substance overdose. 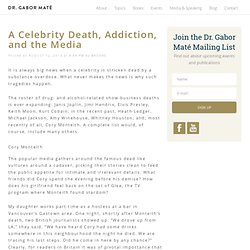 What never makes the news is why such tragedies happen. The roster of drug- and alcohol-related show-business deaths is ever expanding: Janis Joplin, Jimi Hendrix, Elvis Presley, Keith Moon, Kurt Cobain; in the recent past, Heath Ledger, Michael Jackson, Amy Winehouse, Whitney Houston; and, most recently of all, Cory Monteith. A complete list would, of course, include many others. The popular media gathers around the famous dead like vultures around a cadaver, picking their stories clean to feed the public appetite for intimate and irrelevant details. My daughter works part-time as a hostess at a bar in Vancouver’s Gastown area. In our celebrity culture only the demise of a famous person attracts press attention to what is a daily human tragedy across North America and the world. If a celebrity suffers, the media deems it essential information. 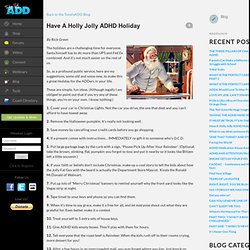 Santa himself has to do more than UPS and Fed Ex combined. And it’s not much easier on the rest of us. The DSM IV Diagnostic Criteria: A Closer Look. What is ADD? What is ADD? 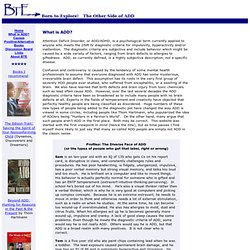 Attention Deficit Disorder, or ADD/ADHD, is a psychological term currently applied to anyone who meets the DSM IV diagnostic criteria for impulsivity, hyperactivity and/or inattention. The diagnostic criteria are subjective and include behavior which might be caused by a wide variety of factors, ranging from brain defects to allergies to giftedness. ADD, as currently defined, is a highly subjective description, not a specific disease. Confusion and controversy is caused by the tendency of some mental health professionals to assume that everyone diagnosed with ADD has some mysterious, irreversible brain defect. This assumption has its roots in the very first group of severely ADD people ever studied, who suffered from encephalitis, or a swelling of the brain. There are two major types of ADD at this time (this aspect of ADD keeps evolving): ADD with hyperactivity (the traditional type of ADD) and ADD without hyperactivity ("inattentive" type). Symptoms of ADHD/ADD (Attention Deficit Hyperactivity Disorder)

The symptoms of ADHD include inattention and/or hyperactivity and impulsivity. 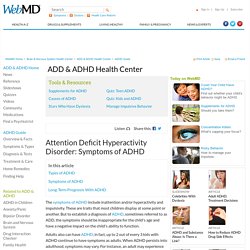 These are traits that most children display at some point or another. But to establish a diagnosis of ADHD, sometimes referred to as ADD, the symptoms should be inappropriate for the child's age and have a negative impact on the child's ability to function. Adults also can have ADHD; in fact, up to 2 out of every 3 kids with ADHD continue to have symptoms as adults. ADHD in Adults: Symptoms, Statistics, Causes, Types, Treatments, and More. 10 Adult ADHD Symptoms: Disorganization, Recklessness, and More. Why do I need to register or sign in for WebMD to save? 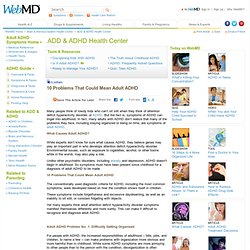 We will provide you with a dropdown of all your saved articles when you are registered and signed in. Many people think of rowdy kids who can’t sit still when they think of attention deficit hyperactivity disorder, or ADHD. But the fact is, symptoms of ADHD can linger into adulthood. ADHD and More. ADD: Postive Quotes. Self-Help for Adult ADD / ADHD: Tips for Managing Symptoms and Getting Focused.

Managing adult ADD / ADHD: What you need to know Adult ADD/ADHD can present challenges across all areas of life, from getting organized at home to reaching your potential at work. 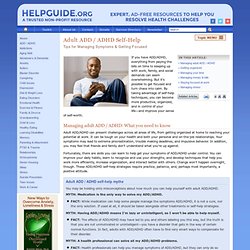 It can be tough on your health and both your personal and on-the-job relationships. Your symptoms may lead to extreme procrastination, trouble making deadlines, and impulsive behavior. In addition, you may feel that friends and family don’t understand what you’re up against. Emotional Skills Toolkit: Bring Your Life Into Balance. We often hear from people who feel overwhelmed by stress, family, work and relationship problems, health challenges, and painful emotions. They’ve tried many approaches to help themselves feel better, but they just can’t seem to follow through, or what they’ve done hasn't helped them enough. If this sounds familiar, you know that it’s all too easy to become discouraged when you’re stuck. The problem is not willpower—all the willpower in the world won’t matter if you can’t manage stress or keep your emotions in balance.

The good news: you can learn these important emotional skills, no matter your age or the obstacles you face. That’s what this free online program teaches. Roadmap/Checklist for the Toolkit. Attention Deficit Hyperactivity Disorder (ADHD) Screening Test.

Factsheets - Food Intolerance Network. ADHD and diet - Food Intolerance Network. ADHD Diets for Children and Adults. Why do I need to register or sign in for WebMD to save? We will provide you with a dropdown of all your saved articles when you are registered and signed in. Brain Foods Pictures Slideshow: What to Eat for Better Concentration. (1) Liv Friis-Larsen / iStockphoto (2) Christopher Robbins / Digital Vision / Getty Images. Richard Branson. Richard Branson in TED / Dyslexic / ADHD / ADD.