Self-Help for Adult ADD / ADHD: Tips for Managing Symptoms and Getting Focused 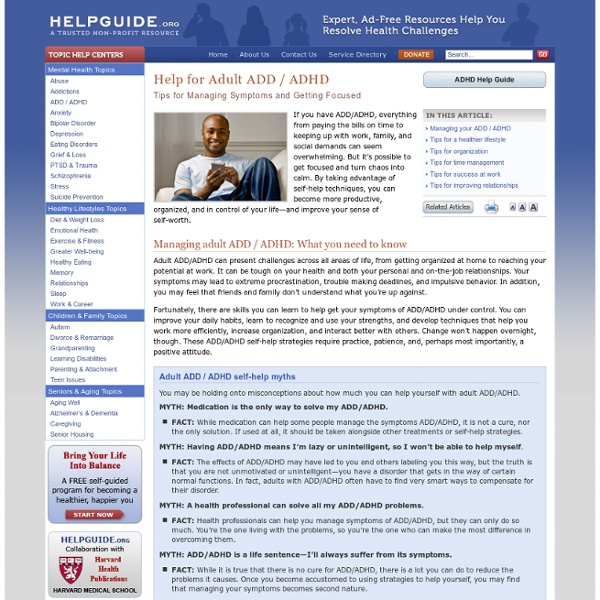 Managing adult ADD / ADHD: What you need to know Adult ADD/ADHD can present challenges across all areas of life, from getting organized at home to reaching your potential at work. It can be tough on your health and both your personal and on-the-job relationships. Your symptoms may lead to extreme procrastination, trouble making deadlines, and impulsive behavior. Fortunately, there are skills you can learn to help get your symptoms of ADD/ADHD under control. Adult ADD / ADHD self-help myths You may be holding onto misconceptions about how much you can help yourself with adult ADD/ADHD. MYTH: Medication is the only way to solve my ADD/ADHD. FACT: While medication can help some people manage the symptoms ADD/ADHD, it is not a cure, nor the only solution. MYTH: Having ADD/ADHD means I’m lazy or unintelligent, so I won’t be able to help myself. MYTH: A health professional can solve all my ADD/ADHD problems. MYTH: ADD/ADHD is a life sentence—I’ll always suffer from its symptoms. Create space.

Action for Happiness Accept Yourself as You Are, Even When Others Don’t “What other people think of me is none of my business.” ~Wayne Dyer “You’re too quiet.” This comment and others like it have plagued me almost all my life. As a child and teenager, I allowed these remarks to hurt me deeply. When I did, the response was often, “Wow! This would make me just want to crawl back into my shell and hide. The older I got, the angrier I became. If only it were that simple, I thought. At 17, I thought I’d found the perfect solution: alcohol. When I was drunk, everyone seemed to like me. Another strategy was to attach myself to a more outgoing friend. Although I didn’t do it consciously, wherever I went I would make friends with someone much louder than me. Sometimes I just tried faking it. When I was 24, I began teaching English as a Foreign Language, and a month into my first contract in Japan, I was told my students found me difficult to talk to. It seemed that I was doomed. Or maybe not. What really matters is: do you think you need to change? And you know what?

What has a goddess of love to do with warfare? | The House of Vines Everyone knows the goddess Aphrodite, right? The blonde, buxom, bubble-headed beauty rising from the waves on a conch shell, surrounded by fat little flying cupids, flowers, birds, and golden sunlight gleaming off of her diaphanous gown that doesn’t leave a whole lot to the imagination. Her gifts to mortal-kind are grace, feminine wiles, the warmth of love, successful relationships, and everything that is sweet and pleasant about life. This image of the goddess has been a favorite of poets and painters down through the ages and has become deeply imbedded in our collective unconscious. Even people who do not recognize the divinity of Aphrodite respond to the power of this image, as evidenced by the lasting interest in faded celebrities such as Marilyn Monroe and Anna Nicole Smith, who have both been likened to the goddess by lazy journalists more times than one can count. And yet, this is only half of the picture. It is a naïve question. Why, after all, do we do the things that we do?

Ten Tips for the Shy Job Seeker In my previous post , I discussed the challenges for shy (or introverted ) people in the job market. I offered some general advice, but in this post I'd like to highlight ten things you can do (or think about) that might give you the edge in the very situations you prefer to avoid. 1. First, stop apologizing for being who you are. 2. So after an interview, networking event, or any other extraverted activity don't be too hard on yourself. 3. At the same time, it's OK to mention that you tend to have an understated style -- in fact that can be a great response to the typical "what is your weakness?" 4. 5. 6. 7. 8. 9. 10. Finally, while introversion may be an innate trait , social skills and appropriate networking and interviewing behavior can be learned by anyone.

ADHD Spouses: Step By Step Conflict Resolution | ADHD and Marriage Once again, my husband and I are at odds over phones. But how we’ve resolved it this time is illustrative of one good way to get past having legitimately conflicting objectives. The phone issue remains outstanding (for now) but I’m actually happy. Years ago, in our “old relationship”, this situation would have caused a huge amount of conflict and pain. Here’s how we now avoid that… A tiny bit of background first: I want to change my cell phone back from a smart phone to a “dumb” phone because my current phone is almost useless to me for a variety of quirky reason. After two weeks I asked if he would mind if I made the call. So that’s the background. A week ago I told him that I understood his desire to try to change over the data plan, and that I knew he was busy (in fact going out of town for a week) but that if he hadn’t decided the phone/data plan change wasn’t important enough to do by two weeks after his return, then I was going to take over the project and make the call myself.

Create the perfect design portfolio: 30 pro tips | Portfolios How much time do you spend improving your portfolio? Be honest - does it showcase your best stuff? Whether your design portfolio is physical or digital, read on to discover how to create the perfect portfolio today! There's nothing more important to your career than presenting your best work in an attractive, professional and accessible way. We've divided the tips into physical and online portfolios - let's start with the physical... Physical portfolios Physical design portfolios are one-off paper creations, so they can be tailored to the job you are applying for. 01. How many examples should a design portfolio include? 02. Only include design portfolio examples for a full-time position that are appropriate to the role. 03. Illustrators and designers aren't just employed for their style but also for the clarity with which they interpret a creative brief. 04. That doesn't mean, of course, that your design portfolio must only include client work. 05. 06. 07. 08. 09. 10. Online porfolios 11.

Mental Health Questions and Answers Skin & Ink Magazine | Tattoos & Tradition Adult ADD / ADHD: Signs, Symptoms, Effects, and Treatment Understanding ADD / ADHD in adults Attention deficit disorder is not just a problem in children. If you were diagnosed with childhood ADD/ADHD, chances are, you’ve carried at least some of the symptoms into adulthood. ADD / ADHD: It’s not just for kids Attention deficit disorder often goes unrecognized throughout childhood. Alternately, you may have been able to compensate for the symptoms of ADD/ADHD when you were young, only to run into problems as your responsibilities increase. The good news is that, no matter how it feels, the challenges of attention deficit disorder are beatable. Myths and Facts about ADD / ADHD in Adults MYTH: ADD/ADHD is just a lack of willpower. FACT: ADD/ADHD looks very much like a willpower problem, but it isn’t. MYTH: Everybody has the symptoms of ADD/ADHD, and anyone with adequate intelligence can overcome these difficulties. FACT: ADD/ADHD affects persons of all levels of intelligence. Source: Dr. Signs and symptoms of adult ADD / ADHD Relationship problems.

Thriving with FAST MINDS > CHADD - Nationally recognized authority on ADHD by Craig Surman, MD, and Tim Bilkey, MD, with Karen Weintraub OFTEN WHEN CLINICIANS DIAGNOSE ADHD, they look for obvious signs of impairment such as being dismissed from jobs or poor grades at school. But this focus on external consequences misses what it’s like to live with these characteristics every day. People with FAST MINDS may be living with the constant stress of being reactive rather than proactive—handling demands at the last minute, under stress, rather than being prepared and feeling confident. FAST MINDS explained FAST MINDS is an acronym for the challenges of living with ADHD. When reading the following traits, see if they reflect your experience (or those of someone you care about). FORGETFUL: Do you forget what people have told you? Know how you function best We like to ask people to tell us about moments of success, when their interests and actions are aligned and they feel like they’re ﬁring on all cylinders. How did you make it happen?

Health | Mental health care 'not holistic' People with severe mental illness are still receiving worryingly sub-standard levels of physical care, a report says. Experts believe poor physical care contributes towards a three times higher rate of premature death among those with severe mental problems. This group is at greater risk of physical illness, often due to their mental illness and lifestyle factors. Among those contributing to the report are mental health charities Rethink and Sane, and the Royal College of Nursing. The report calls for a holistic approach to treating mental health, with physical and lifestyle factors playing an important role. Figures show that people with severe mental illness have up to five times the risk of the general population of diabetes, and twice the risk of cardiovascular disease and respiratory diseases. Holistic approach Government guidance recommends that people being treated for severe mental health problems should undergo assessments of their physical health. 'Tremendous impact'