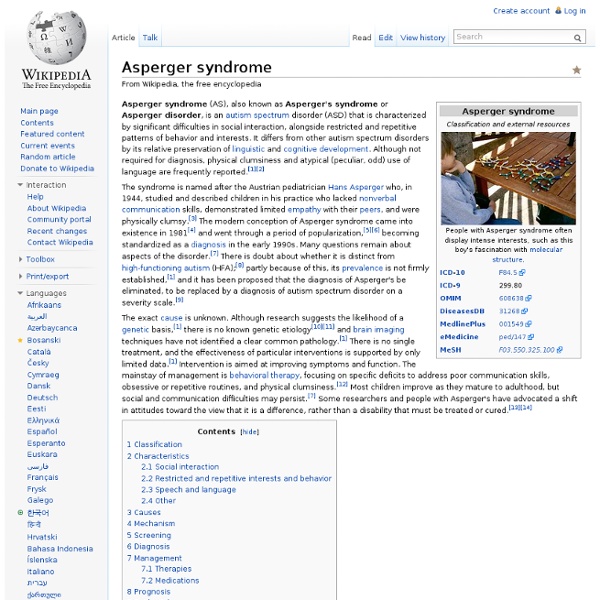 Asperger syndrome (AS), also known as Asperger disorder (AD) or simply Asperger's, is an autism spectrum disorder (ASD) that is characterized by significant difficulties in social interaction and nonverbal communication, alongside restricted and repetitive patterns of behavior and interests. It differs from other autism spectrum disorders by its relative preservation of linguistic and cognitive development. Although not required for diagnosis, physical clumsiness and atypical (peculiar, odd) use of language are frequently reported.[1][2] The syndrome is named after the Austrian pediatrician Hans Asperger who, in 1944, studied and described children in his practice who lacked nonverbal communication skills, demonstrated limited empathy with their peers, and were physically clumsy.[3] The modern conception of Asperger syndrome came into existence in 1981[4] and went through a period of popularization,[5][6] becoming standardized as a diagnosis in the early 1990s. Classification Causes

Nootropic Nootropics (/noʊ.əˈtrɒpɨks/ noh-ə-TROP-iks), also referred to as smart drugs, memory enhancers, neuro enhancers, cognitive enhancers, and intelligence enhancers, are drugs, supplements, nutraceuticals, and functional foods that improve one or more aspects of mental function, such as working memory, motivation, and attention.[1][2] The word nootropic was coined in 1972 by the Romanian Dr. Corneliu E. Giurgea,[3][4] derived from the Greek words νους nous, or "mind", and τρέπειν trepein meaning to bend or turn.[5] Availability and prevalence[edit] At present, there are only a few drugs which have been shown to improve some aspect of cognition in medical reviews. These drugs are purportedly used primarily to treat cognitive or motor function difficulties attributable to such disorders as Alzheimer's disease, Parkinson's disease, Huntington's disease and ADHD. Academic use[edit] Several factors positively and negatively influence the use of drugs to increase cognitive performance. Drugs[edit]

Asperger Syndrome Fact Sheet Asperger syndrome (AS) is an autism spectrum disorder (ASD), one of a distinct group of complex neurodevelopment disorders characterized by social impairment, communication difficulties, and restrictive, repetitive, and stereotyped patterns of behavior. Other ASDs include autistic disorder, childhood disintegrative disorder, and pervasive developmental disorder not otherwise specified (usually referred to as PDD-NOS). ASDs are considered neurodevelopmental disorders and are present from infancy or early childhood. Although early diagnosis using standardized screening by age 2 is the goal, many with ASD are not detected until later because of limited social demands and support from parents and caregivers in early life. The severity of communication and behavioral deficits, and the degree of disability, is variable in those affected by ASD. Two core features of autism are: a) social and communication deficits and b) fixated interests and repetitive behaviors.

What is Asperger Syndrome? Dr Hans Asperger, an Austrian pediatrician, originally described Asperger’s Syndrome in 1944. The syndrome has more recently been classified as an autistic spectrum disorder. Children and adults with Asperger’s Syndrome have an intellectual capacity within the normal range, but have a distinct profile of abilities that has been apparent since early childhood. The profile of abilities includes the following characteristics: A qualitative impairment in social interaction: Failure to develop friendships that are appropriate to the child’s developmental level. From my clinical experience I consider that children and adults with Asperger’s Syndrome have a different, not defective, way of thinking. Copyright © 2005 Tony Attwood

Jorge Luis Borges Jorge Francisco Isidoro Luis Borges, KBE (Spanish: [ˈxorxe ˈlwis ˈβorxes] In 1914 his family moved to Switzerland, where he studied at the Collège de Genève. The family travelled widely in Europe, including stays in Spain. On his return to Argentina in 1921, Borges began publishing his poems and essays in surrealist literary journals. He also worked as a librarian and public lecturer. In 1955 he was appointed director of the National Public Library and professor of Literature at the University of Buenos Aires. His international reputation was consolidated in the 1960s, aided by his works being available in English, by the Latin American Boom and by the success of García Márquez's One Hundred Years of Solitude.[6] Writer and essayist J. Life and career[edit] Early life and education[edit] Jorge Luis Borges in 1921 At nine, Jorge Luis Borges translated Oscar Wilde's The Happy Prince into Spanish. Early writing career[edit] Later career[edit] Jorge Luis Borges in the 1940s

Better genetic test for autism? Chromosomal microarray analysis picks up more abnormalities than current tests A large study from Children's Hospital Boston and the Boston-based Autism Consortium finds that a genetic test that samples the entire genome, known as chromosomal microarray analysis, has about three times the detection rate for genetic changes related to autism spectrum disorders (ASDs) than standard tests. Publishing in the April issue of Pediatrics (and online March 15), the authors urge that CMA become part of the first-line genetic work-up for ASDs. Expectant parents who have family members with ASDs, as well as families who already have an affected child, often request genetic testing. However, there is still only limited knowledge about actual causative genes. The currently recommended tests (karyotyping to look for chromosomal abnormalities and testing for Fragile X, the single largest known genetic cause of ASDs) often come up negative. CMA offers about 100-fold greater resolution than standard karyotyping.

Asperger's Syndrome Symptoms in Children, Teens, Adults Although there are many possible symptoms of Asperger's syndrome, the main symptom is significant trouble with social situations. Your child may have mild to severe symptoms or have a few or many of these symptoms. Because of the wide variety of symptoms, no two children with Asperger's are alike. Symptoms during childhood Parents often first notice the symptoms of Asperger's syndrome when their child starts preschool and begins to interact with other children. Children with Asperger's syndrome may: Not pick up on social cues and may lack inborn social skills, such as being able to read others' body language, start or maintain a conversation, and take turns talking.Dislike any changes in routines.Appear to lack empathy.Be unable to recognize subtle differences in speech tone, pitch, and accent that alter the meaning of others' speech. A child with one or two of these symptoms does not necessarily have Asperger's syndrome. Symptoms during adolescent and teen years

The Curious Incident of the Dog Home > English > Standard > Module B: Close Study of Text > The Curious Incident of the Dog This material was written by Amelia Lawson. Personal Engagement Distinctive Characteristics Themes Setting Narrative elements and the Language of the NovelNarrative Development/ DigressionsLanguage/ Close Study of Text QuestionsForm/StructureKey EventsCharacterGenreImaginative TasksDeveloping a thesisSample AssessmentJournal/ Comprehension Questions In this Module you only need to focus on one text; in this case, the novel, The Curious Incident of the Dog in the Night-time by Mark Haddon. It is important you develop the following as you undertake this module: A strong personal response to and understanding of the issues explored in the novel. As with all of the modules, you may be asked to express your ideas in a number of text types (for example, an essay, speech, online resource). Personal Engagement Aim Activity/Discussion What type of book do you like and why? As you read the novel you should: Themes