Teaching Students with Aspergers Syndrome: Tips for Teachers and Parents 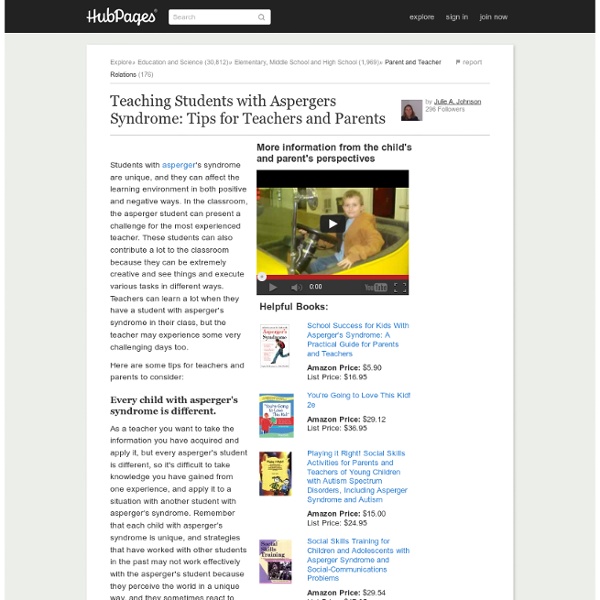 Students with asperger's syndrome may experience difficulties with focusing as well as lack of focus. Focus involves attention. Sometimes asperger's students focus all their attention on a particular object or subject; therefore, they fail to focus on what information the instructor is presenting. All their energy is directed toward a particular subject or object. Why? Because that object or subject is not overwhelming to them and they understand it. To overcome this problem, the teacher can try to establish some connection between the object or subject of interest and the area of study. The possibilities for instruction are endless, but it will take some time and creative planning on the part of the teacher. Sensory issues affect learning for the student with asperger's syndrome. Often aperger's students are distracted by something in the environment that they simply cannot control. Obviously, a teacher does not want disruptions in the classroom.

Teaching Aspergers Children: Tips For Teachers Educators can be great allies in keeping your youngster with Aspergers (AS) or High-Functioning Autism safe and successful in school, but you'll need to make sure they have all the knowledge they need to help. Use the suggestions below to create an information packet to bring educators up to speed... The Five Main Things Educators Need to Know— 1. 2. 3. 4. 5. General Behaviors— · At times, our youngster may experience "meltdowns" when nothing may help behavior. · Foster a classroom atmosphere that supports the acceptance of differences and diversity. · Generally speaking an adult speaking in a calm voice will reap many benefits. · It is important to remember that just because the youngster learns something in one situation this doesn't automatically mean that they remember or are able to generalize the learning to new situations. · Note strengths often and visually. · Our youngster may have vocal outbursts or shriek. · Our youngster may need help with problem-solving situations. Transitions—

Asperger syndrome: the triad of impairments What is the triad of impairments and how can parents work with schools to help overcome them? In addition to the core impairments of the triad, many students with Asperger syndrome will have difficulties with fine and gross motor co-ordination and organisational skills. They can also be affected by underlying fears and phobias, often (but not always) related to sensory sensitivities. These can have a significant effect on their behaviour, and the impact of fears and phobias on daily life should not be underestimated. Our experience shows that transition is most successful where there is good communication between parents and school. Some successful examples of ways of sharing with parents include: Having a named adult for the student to approach when in difficulty. In the primary school, parents are generally used to daily contact with staff, and will need time to adjust to the greater independence expected at secondary school.

Cognitive behavioral therapy CBT has been demonstrated to be effective for the treatment of a variety of conditions, including mood, anxiety, personality, eating, substance abuse, tic, and psychotic disorders. Many CBT treatment programs for specific disorders have been evaluated for efficacy; the health-care trend of evidence-based treatment, where specific treatments for symptom-based diagnoses are recommended, has favored CBT over other approaches such as psychodynamic treatments.[3] However, other researchers have questioned the validity of such claims to superiority over other treatments.[4][5] History[edit] Philosophical roots[edit] Precursors of certain fundamental aspects of CBT have been identified in various ancient philosophical traditions, particularly Stoicism.[6] For example, Aaron T. Behavior therapy roots[edit] At the same time this of Eysenck's work, B.F. The emphasis on behavioral factors constituted the "first wave" of CBT.[15] Cognitive therapy roots[edit] Behavior and Cognitive Therapies Merge[edit]

About autism Around 700,000 people in the UK have autism. Together with their families they make up around 2.8 million people whose lives are touched by autism every single day. This section explains autism, Asperger syndrome and related diagnoses. What is Asperger syndrome? Here we explain more about Asperger syndrome - a form of autism - including the three main difficulties that people with Asperger syndrome share, how many people have the condition, and what may cause it. As soon as we meet a person we make judgements about them. From their facial expression, tone of voice and body language we can usually tell whether they are happy, angry or sad and respond accordingly. People with Asperger syndrome can find it harder to read the signals that most of us take for granted. About Asperger syndrome Asperger syndrome is a form of autism, which is a lifelong disability that affects how a person makes sense of the world, processes information and relates to other people. Asperger syndrome is mostly a 'hidden disability'. social communication social interaction social imagination. They are often referred to as 'the triad of impairments' and are explained in more detail on page 3. Three main areas of difficulty Difficulty with social communication Love of routines

Guidelines for teaching students with Asperger syndrome in further education colleges As well as behaviour, the areas of impairment will affect the thought processes that govern behavioural responses to the environment and responses to the demands made by people, and situations arising within this space. I will briefly outline the triad of impairments and the specific characteristics of Asperger syndrome before continuing. Asperger syndrome is a condition which forms part of the autism spectrum, it is caused by a biological brain dysfunction. In order for there to be a diagnosis of autistic spectrum disorder, there have to be impairments in three main areas: - concrete understanding of language and formal, monologue type use of speech and a distinct difficulty in interpreting non-verbal forms of communication. - difficulty in relating on a social level to others, inability to read the thoughts and feelings of others; forming relationships is a problem area. Characteristics specific to Asperger syndrome - obsessional insistence on sameness, that is also imposed on others.

Inside and Out: A Few Words about Empathy | Autism and Empathy By Nicole Nicholson on August 17th, 2011 Got empathy? I do. Shocking? There is lot of misinformation about autism spectrum disorders to begin with. “ …it would appear that both Asperger syndrome and psychopathy…share some common characteristics, notably the total absence of human empathy…” What a load of bullshit! I began considering the whole ball of wax with empathy. And my capacity to hurt still rings true now. And it doesn’t seem to matter whether I know the people personally or not. I’ll go even a bit further: I have trouble sometimes watching TV shows or movies that are emotionally evocative. So you can understand why I began challenging the conventional wisdom about empathy and Asperger Syndrome. “Theory of Mind” difficulties. Now that I’ve unpacked the two reasons behind the misconception that we lack empathy, I’ll put the pieces together. “From a young age, I incorporated that axiom ['do unto others as you would have others do unto you'] into my belief structure.

Empathy, Mindblindness, and Theory of Mind In a 2001 research paper , Simon Baron-Cohen describes Theory of Mind as "...being able to infer the full range of mental states (beliefs, desires, intentions, imagination, emotions, etc.) that cause action. In brief, having a theory of mind is to be able to reflect on the contents of one's own and other's minds." For many of those with autism or Asperger's , mindblindness, or lack of Theory of Mind creates major barriers to communication and closeness. These barriers often lead to those nearest to the individual feel, whether real or perceived, a lack of empathy from the individual. When I think of Theory of Mind, I think of an amusing, but of course very inaccurate, belief I harbored as a young child. While playing games like hide and seek, I used to think, "If I can't see them, they can't see me." Take the following example typically used to test children's Theory of Mind skills: So, here it comes - the "E" word - empathy. I consider myself a very soft hearted person.