How Treating My ADHD with Adderall Changed My Life. Medication. Rates of ADHD Are Skyrocketing, But That’s a Good Thing. The number of children diagnosed with attention deficit hyperactivity disorder (ADHD) rose by 43 percent between 2003 and 2011. 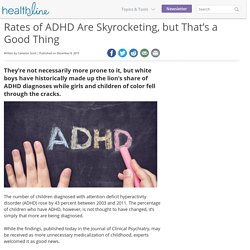 The percentage of children who have ADHD, however, is not thought to have changed, it’s simply that more are being diagnosed. While the findings, published today in the Journal of Clinical Psychiatry, may be received as more unnecessary medicalization of childhood, experts welcomed it as good news. Children Prescribed ADHD Medication Have Trouble Sleeping; Here's Why That's A Bigger Problem Than It Sounds. The negative health consequences associated with sleep deprivation are innumerable, so it’s unfortunate that a lot of medications result in insomnia, like medications used to treat attention deficit hyperactivity disorder (ADHD), which already has its own impact on sleep. 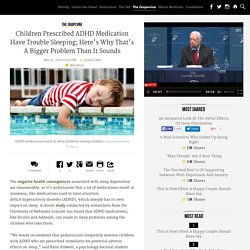 A recent study conducted by researchers from the University of Nebraska-Lincoln has found that ADHD medications, like Ritalin and Adderall, can result in sleep problems among the children who take them. "We would recommend that pediatricians frequently monitor children with ADHD who are prescribed stimulants for potential adverse effects on sleep," said Katie Kidwell, a psychology doctoral student and the study's lead author, in a statement. Kidwell and her colleagues screened close to 10,000 articles and reviewed 167 full tests before deciding on nine studies to use in their meta-analysis. ‘Smart drugs’ are here — should college students be allowed to use them? Should students be able to pop pills when they crack their books? 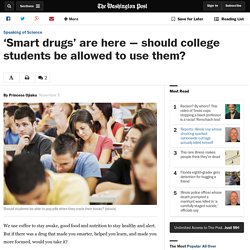 (istock) We use coffee to stay awake, good food and nutrition to stay healthy and alert. But if there was a drug that made you smarter, helped you learn, and made you more focused, would you take it? That’s a question that Nicole Vincent, associate professor of philosophy, law and neuroscience at Georgia State University, asked to open her TED talk in Sydney last year. That question also opened a Monday night debate at George Washington University in which two sides argued both for and against whether “College Students Should Be Allowed to Take Smart Drugs.” Uk.businessinsider. Adderall Empire: The Little Orange Pill That Delivers Fake Focus  Through my firsthand experiences, The Adderall Empire: A Life With ADHD and the Millennials' Drug of Choice, offers an illuminating look into life with Attention Deficit Hyperactivity Disorder (ADHD) and the effects of Adderall, one of the common medications prescribed to treat ADHD. 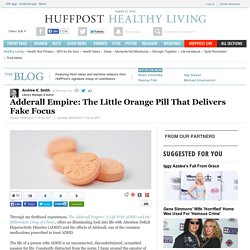 The life of a person with ADHD is an unconnected, discombobulated, scrambled passion for life. Constantly distracted from the norm, I hang around the equator of life, bouncing back and forth on an infinitely thin line. Here Are The Drugs You Can’t Use in Professional Gaming. ADD and ADHD in Children Slideshow. Reviewed by Hansa D. 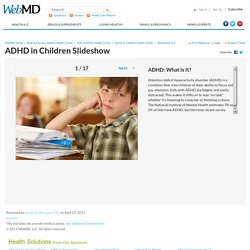 Bhargava, MD on April 23, 2015 Sources: Easing ADHD without meds. Because of his attention-deficit/hyperactivity disorder (ADHD), the 10-year-old boy rarely even tried to answer the questions on the math and language arts worksheets his fourth-grade teacher asked students to complete during class. Not only that, he often bothered the students who did. Then the teacher made an important change to the boy's worksheets: She wrote the correct answers on them with invisible markers so that the boy could reveal the correct answer by coloring over the space as soon as he finished a question. The teacher also randomly inserted stars he could uncover by coloring and told him he would earn a reward for collecting four stars. The strategy paid off: The boy was soon answering every question and getting 84 percent of them correct. Giving immediate feedback is just one of many simple and effective behavioral approaches to improving children's attention, says psychologist Nancy A. Behavioral interventions Parent programs. Lifestyle changes. Stimulant ADHD Medications: Methylphenidate and Amphetamines. 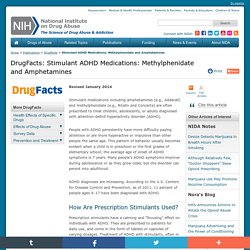 People with ADHD persistently have more difficulty paying attention or are more hyperactive or impulsive than other people the same age. This pattern of behavior usually becomes evident when a child is in preschool or the first grades of elementary school; the average age of onset of ADHD symptoms is 7 years. Many people’s ADHD symptoms improve during adolescence or as they grow older, but the disorder can persist into adulthood. ADHD diagnoses are increasing. According to the U.S. What are the symptoms of ADHD? There are 3 different types of ADHD: inattentive, hyperactive-impulsive, or combined type. 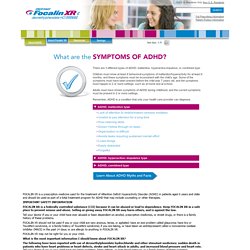 Children must show at least 6 behavioral symptoms of inattention/hyperactivity for at least 6 months, and these symptoms must be inconsistent with the child's age. What Is ADHD? Listen Causes of ADHD ADHD is not caused by poor parenting, too much sugar, or vaccines. 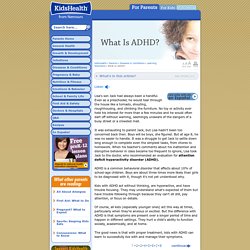 ADHD has biological origins that aren't yet clearly understood. No single cause has been identified, but researchers are exploring a number of possible genetic and environmental links. Studies have shown that many kids with ADHD have a close relative who also has the disorder. Although experts are unsure whether this is a cause of the disorder, they have found that certain areas of the brain are about 5% to 10% smaller in size and activity in kids with ADHD. 23 First World Problems People With ADHD Would Understand. One minute you're tacking the new limited edition Bea Arthur stamp into your acid-free binder and the next you're leaning out your window looking at a bug, the clouds, and – oh look! 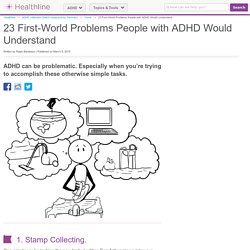 An airplane! You never know when you might pass a 7-11, suddenly get an urge for a Slurpee and pull an abrupt U-turn in the middle of the highway. 3. Going to a Child's Piano Recital. Lucy might be your favorite niece, but you'd rather get up and talk to the guy operating the spotlight to see if you can make shadow puppets across the stage. 4. Because even though you really want to answer the questions truthfully, the little needle bounces every time you say something and you wonder if you can get it to draw a mountain range if you keep lying. It takes you two seconds to move your pawn, but your buddy takes like nine hours to do anything, and the queen makes a really nice, sharp object to poke him with. 7. 8. 9. 10. 12. 13. 14. 18. WebMD ADD and ADHD Guide - Better Information for Better Health.