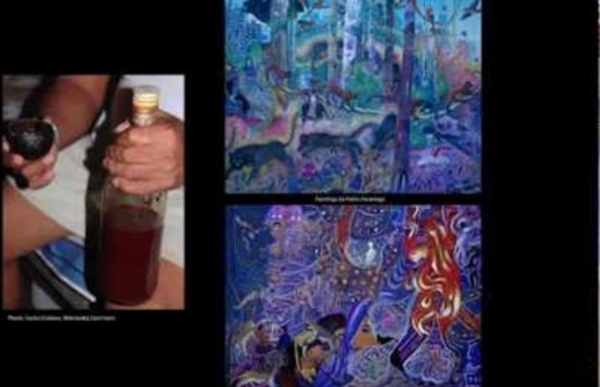 This video is currently unavailable. Sorry, this video is not available on this device. Video player is too small. Normal quality speed

DMT The Spirit Molecule FULL DOCUMENTARY…♥♥♥… WoW… a few years back i was just-an-inch away from getting this… i rather thought i should buy this later.. man only after a few months i realised it has been BANNED world-over…hmm i Missed it !!!…. But since i did tried I-dosage…e-DMT.. i would better avoid it…Not my peace of Cake though…. The Spirit Molecule investigates dimethyltryptamine (DMT), a molecule produced abundantly throughout nature, including humans, and potentially existing in every living organism. Dr. Rick Strassman’s government-sanctioned, human DMT research is the narrative backbone, examining DMT through two traditionally opposed concepts: science and spirituality.

Scientists Claim That Quantum Theory Proves Consciousness Moves To Another Universe At Death A book titled “Biocentrism: How Life and Consciousness Are the Keys to Understanding the Nature of the Universe“ has stirred up the Internet, because it contained a notion that life does not end when the body dies, and it can last forever. The author of this publication, scientist Dr. Robert Lanza who was voted the 3rd most important scientist alive by the NY Times, has no doubts that this is possible. Beyond time and space Lanza is an expert in regenerative medicine and scientific director of Advanced Cell Technology Company.

Edgar Cayce on the future By Kevin Williams Almost every day, several times a day, for more than forty years, Cayce would induce himself into an altered out-of-body state of consciousness and reveal profound information on various subjects such as health, dreams, meditation, religions, and reincarnation, to name a few. But it was the information that Cayce revealed about the future which he is probably most known for. If You Think We Are Alone In The Universe – You Might Want To See This One of the most popular questions today is “are we alone in the universe?” Believe it or not, you’re in the minority if you believe that absolutely no intelligent life exists in the universe. In the United States alone, at least half of all Americans say that we’re not alone in the universe. Fifty percent of Americans already believe that there is some form of life on other planets, while only seventeen percent think that there isn’t. A quarter of Americans believe that intelligent extraterrestrial visitors have already come to Earth and have been doing so for a long time. (source)

Kelp lampshades by Julia Lohmann Vienna Design Week: London-based designer Julia Lohmann thinks dried strips of seaweed could replace leather, paper and plastic to make everyday objects like these laser-cut kelp lampshades (+ audio + slideshow). Above: Julia Lohmann talks to Dezeen editor-in-chief Marcus Fairs about the project Lohmann used a laser cutting machine to create patterns in pieces of kelp before sewing them together, or stretched them into shape while wet to dry into new forms. The malleable strips are also wrapped around rattan structures to create a variety of shapes. "The rattan acts like a skeleton and the seaweed is like a skin on top of it," Lohmann told Dezeen. "Seaweed is an amazing material.

Manipulating Marijuana: Monsanto and Syngenta Invest In RNA Interference Technology CANNABIS CULTURE - Having been cultivated and used ceremonially, recreationally and medicinally for thousands of years, cannabis – despite prohibitive laws surrounding the non-medicinal use of the plant – is undoubtedly on the radar of big agribusiness. These companies would certainly turn a profit from developing a patentable transgenic seed for sole distribution if the use of cannabis were to become legal. It would be easy for these companies to create a monopoly over the industry by abusing their ties with federal regulators. This has all been a point of much debate within the cannabis community for many years. With this in mind, it's fair to say that one of the only positives of marijuana prohibition, with the art of breeding, growing and distributing cannabis heavily underground for most of its commercial history, the Big 6 seed and chemical companies have not been able to dominate the industry with their patented technologies.

Rosenhan experiment Experiment to determine the validity of psychiatric diagnosis Rosenhan's study was done in eight parts. The first part involved the use of healthy associates or "pseudopatients" (three women and five men, including Rosenhan himself) who briefly feigned auditory hallucinations in an attempt to gain admission to 12 psychiatric hospitals in five states in the United States. Scientific evidence for survival of consciousness after death According to Wikipedia.org, "psychometry" is a psychic ability in which the user is able to relate details about the past condition of an object or area, usually by being in close contact with it. The user could allegedly, for example, give police precise details about a murder or other violent crime if they were at the crime scene or were holding the weapon used. About.com's Paranormal Phenomena website lists information about several of the most convincing psychometrists.