Einstein on Kindness, Our Shared Existence, and Life’s Highest Ideals 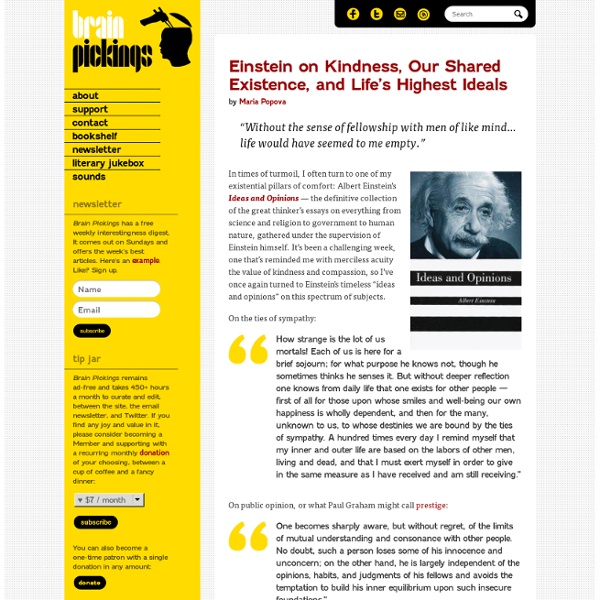 by Maria Popova “Without the sense of fellowship with men of like mind… life would have seemed to me empty.” In times of turmoil, I often turn to one of my existential pillars of comfort: Albert Einstein’s Ideas and Opinions — the definitive collection of the great thinker’s essays on everything from science and religion to government to human nature, gathered under the supervision of Einstein himself. It’s been a challenging week, one that’s reminded me with merciless acuity the value of kindness and compassion, so I’ve once again turned to Einstein’s timeless “ideas and opinions” on this spectrum of subjects. On the ties of sympathy: How strange is the lot of us mortals! On public opinion, or what Paul Graham might call prestige: One becomes sharply aware, but without regret, of the limits of mutual understanding and consonance with other people. On our interconnectedness, interdependency, and shared existence: On good and evil, creative bravery, and human value: On life’s highest ideals:

3 Bad Habits That Can Derail Any Relationship As a marriage therapist, one of the questions I get asked most by family and friends is What should I do so we don’t end up in couples therapy? As a wife, I get it: you want to know what goes wrong in other relationships so you can avoid it in yours. Unfortunately, there’s no magic checklist that will guarantee marital bliss. But I’ve seen enough couples in my professional life that I can offer an insider’s look at the three bad habits that I see often in the unhappy couples who find themselves on my couch. 1. Culturally we've embraced this idea that happy couples don’t fight. No two human beings alive will agree on everything and always meet each other’s needs and expectations; and that’s part of the excitement of being together. Too often couples think that conflict is a sign that the relationship is falling apart. 2. If you disagree on a major issue, it's so much easier to turn to a friend or family member who shares your position rather than facing the conflict with your partner. 3.

Buddhadharma In Everyday Life. ~ via Linda Lewis Lojong 12, “Drive All Blames into One” Perhaps the most challenging and provocative of Atisha’s slogans is Drive All Blames into One. Why in the world would anyone want to do such a thing? Who wants to invite blame? Sometimes it is difficult enough to take the blame for something we actually did, like reaching for honey in the grocery store and accidentally knocking a glass jar of peanut butter off the shelf and onto the floor. When we see our own or others’ defense mechanism shun blame, we also see self-cherishing and ego-fixation. Obviously, it’s good to be responsible for our own mishaps. As a Bodhisattva in progress, why in the world would we want to lay emotional or aggressive blame on anyone else? Interestingly, this simplifies the situation. I remember many years ago, one of my best bosses called me into his office. “Linda, you’ve been doing a good job, working independently, and I am to blame for not giving you enough guidance.” Elephriends - Mindful Affiliates Recent Trackbacks

Meanwhile: An Illustrated Love Letter to the Living Fabric of a City and Our Shared Human Longing to Be Understood by Maria Popova A tender reminder that however vast our differences, we are bonded by the yearning to feel seen for who we are. I’ve written before that every city needs a love letter. Though Meanwhile, in San Francisco: The City in Its Own Words (public library) by illustrator extraordinaire and frequent Brain Pickings contributor Wendy MacNaughton — who gave us the wonderful Lost Cat, one of the best books of 2013 — may be “about” a city, in the sense that the raw inspiration was drawn from the streets of San Francisco, it is really about the city, any city — about community, about subcultures and belonging, about the complexities of gentrification, about what it means to have individual dignity and shared identity. We meet the Mission Hipsters, who might as well be the Williamsburg Hipsters*, or the Insert-Any-City’s-Neighborhood-That-Has-Become-Synonymous-With-Hipsters Hipsters, an affectionate portrait of the cultural trope, down to “hand-knit dog sweater #62″: Donating = Loving

The “I” of the Beholder: What Is the Self? by Maria Popova “The fate of the world depends on the Selves of human beings.” “I change every day, change my patterns, my concepts, my interpretations,” Anaïs Nin wrote to Harper’s Bazaar editor Leo Lerman in history’s most gracious turn-down of a major magazine profile, “I am a series of moods and sensations. I play a thousand roles.” In her seminal book The “I” of the Beholder: A Guided Journey to the Essence of a Child (public library), education pioneer and Roeper School co-founder Annemarie Roeper considers the origin and nature of identity and of the self as it relates to developmental psychology and our formative years. Roeper, who fled to America from Nazi Germany, was born in Vienna in 1918 and came of age in the aftermath of “the age of insight,” which had sparked a historic cross-pollination of science, the arts, and the humanities. Roeper writes in the introduction: We have failed to create a safe, harmonious society for past, current, and future generations. Donating = Loving

The science of love: How "positivity resonance" shapes the way we connect by Maria Popova The neurobiology of how the warmest emotion blurs the boundaries by you and not-you. We kick-started the year with some of history’s most beautiful definitions of love. But timeless as their words might be, the poets and the philosophers have a way of escaping into the comfortable detachment of the abstract and the metaphysical, leaving open the question of what love really is on an unglamorously physical, bodily, neurobiological level — and how that might shape our experience of those lofty abstractions. That’s precisely what psychologist Barbara Fredrickson, who has been studying positive emotions for decades, explores in the unfortunately titled but otherwise excellent Love 2.0: How Our Supreme Emotion Affects Everything We Feel, Think, Do, and Become (UK; public library). Using both data from her own lab and ample citations of other studies, Fredrickson dissects the mechanisms of love to reveal both its mythologies and its practical mechanics. Donating = Loving

The Science of Why Our Brains Are Wired to Connect by Maria Popova “The self is more of a superhighway for social influence than it is the impenetrable private fortress we believe it to be.” “Without the sense of fellowship with men of like mind,” Einstein wrote, “life would have seemed to me empty.” It is perhaps unsurprising that the iconic physicist, celebrated as “the quintessential modern genius,” intuited something fundamental about the inner workings of the human mind and soul long before science itself had attempted to concretize it with empirical evidence. Now, it has: In Social: Why Our Brains Are Wired to Connect (public library), neuroscientist Matthew D. The research my wife and I have done over the past decade shows that this response, far from being an accident, is actually profoundly important to our survival. The neural basis for our personal beliefs overlaps significantly with one of the regions of the brain primarily responsible for allowing other people’s beliefs to influence our own. Donating = Loving Share on Tumblr

The Science and Philosophy of Friendship: Lessons from Aristotle on the Art of Connecting by Maria Popova “Friends hold a mirror up to each other; through that mirror they can see each other in ways that would not otherwise be accessible to them, and it is this mirroring that helps them improve themselves as persons.” “A principal fruit of friendship,” Francis Bacon wrote in his timeless meditation on the subject, “is the ease and discharge of the fulness and swellings of the heart, which passions of all kinds do cause and induce.” For Thoreau, friendship was one of life’s great rewards. But in today’s cultural landscape of muddled relationships scattered across various platforms for connecting, amidst constant debates about whether our Facebook “friendships” are making us more or less happy, it pays to consider what friendship actually is. Philosophers and cognitive scientists agree that friendship is an essential ingredient of human happiness. Maurice Sendak illustration from 'I'll Be You and You Be Me,' a vintage ode to friendship by Ruth Krauss. Donating = Loving

George Saunders on the Power of Kindness, Animated With his gentle wisdom and disarming warmth, Saunders manages to dissolve some of our most deeply engrained culturally conditioned cynicism into a soft and expansive awareness of the greatest gift one human being can give another — those sacred exchanges that take place in a moment of time, often mundane and fleeting, but echo across a lifetime with inextinguishable luminosity. In this immeasurably wonderful animated teaser for the book, narrated by Saunders himself, illustrator Tim Bierbaum brings to life the author’s words: I’d say, as a goal in life, you could do worse than: Try to be kinder.In seventh grade, this new kid joined our class. In the interest of confidentiality, her name will be “ELLEN.” Brain Pickings has a free weekly newsletter.