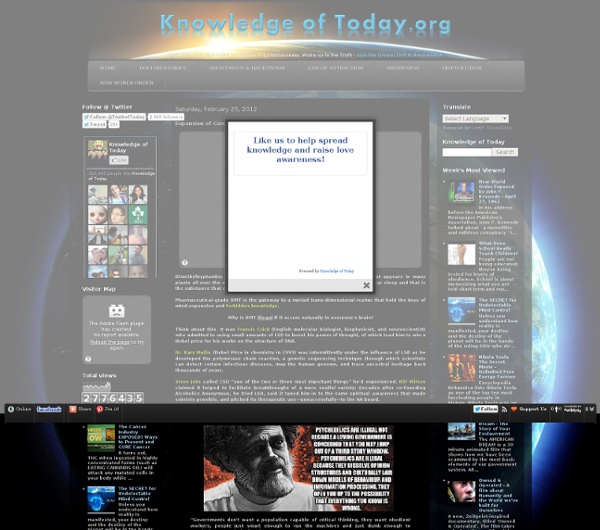 Dimethyltryptamine (DMT) is a naturally occurring hallucinogenic substance that appears in many plants all over the world and even the human body. Because DMT "is" the spirit molecule, it is the reason we dream and the source of having near death experience. Our bodies produce DMT in our sleep within our brain in the pineal gland, which is considered to be the third eye. Pharmaceutical-grade DMT is the gateway to a myriad trans-dimensional realms that hold the keys of mind-expansion and forbidden knowledge. Why is DMT illegal if it occurs naturally in everyone's brain? Think about this. Dr. Steve Jobs called LSD “one of the two or three most important things” he'd experienced. However, for decades, the U.S. government banned medical studies of the effects of LSD. “Governments don't want a population capable of critical thinking, they want obedient workers, people just smart enough to run the machines and just dumb enough to passively accept their situation.” Related Posts

BREAKTHROUGH: DMT Found in the Pineal Gland of Live Rats In a major breakthrough in consciousness and psychedelic studies, Cottonwood Research Foundation has published a paper (soon to appear in the Journal Biomedical Chromatography) documenting the presence of DMT in the brains of living rats. For decades researchers have hypothesized that DMT may be one of the neurochemicals responsible for consciousness, dreams and visionary experiences. It’s certainly responsible for these and ever weirder experiences for those who have smoked it or taken Ayahuasca. DMT has been documented as naturally occurring in human blood, but this was not conclusive evidence that it is produced in the brain. DMT is structurally related to Serotonin, Melatonin and Pinoline, so the small traces in human blood could be an enzymatic breakdown product of these precursor molecules. Now we have clear proof of DMT being manufactured in the living Pineal Glands of rats, and that the genes responsible for this exist in the Pineal Gland and Retina! From the press release:

DMT - Effects of the Worlds Most Potent Psychedelic Substance - Associated Content from Yahoo! - associatedcontent.com DMT, Also known as dimethyltryptamine is a powerful psychedelic substance that can be aquired many different ways which i wont talk about in this article but if you just do some searching online it is not that hard to find a legible way to find it. DMT must be smoked in freebase form and taken in about a 30-55mg dose depending on the instensity of experience that you wish to encounter. When you are ready to experience the effects of DMT it is best to sit down in a small dimly lit room so that it is not to bright to display the visuals of dmt as way to intense and indescribable. 0-15 secs - your lungs start to burn, feels like you want to cough. 15-45 secs - You will hear a very loud whooshing sound in your ears and it will continue to get louder and louder, and you eventual feel your self almost blow up and enter this new universe. 45 sec-1 min - You will break through into another universe, known to many DMT users and DMT hyperspace. 5 - 10min - The visions eventual fade in and out.