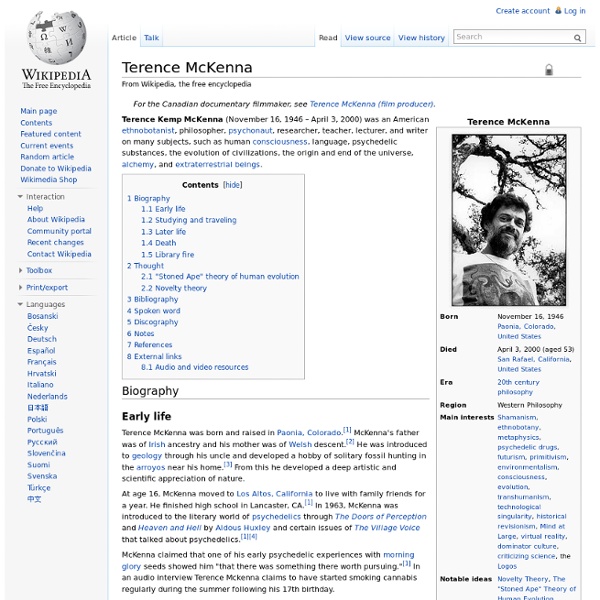 Terence Kemp McKenna (November 16, 1946 – April 3, 2000) was an American philosopher, psychonaut, ethnobotanist, lecturer, and author. He spoke and wrote about a variety of subjects, including psychedelic drugs, plant-based entheogens, shamanism, metaphysics, alchemy, language, culture, technology and the theoretical origins of human consciousness. He was called the "Timothy Leary of the 90's",[1][2] "one of the leading authorities on the ontological foundations of shamanism"[3] and the "intellectual voice of Rave culture".[4] He also formulated a concept about the nature of time based on fractal patterns he claimed to have discovered in the I Ching, which he called novelty theory,[3][5] proposing this predicted the end of time in the year 2012.[6][7][5][8] His promotion of novelty theory and its connection to the Mayan calendar is credited as one of the factors leading to the widespread beliefs about 2012 eschatology.[9] Novelty theory is considered pseudoscience.[10][11] Biography Death

Lucy Parsons Biography[edit] Early life[edit] Lucy (or Lucia) Eldine Gonzalez was born around 1853 in Texas, probably as a slave, to parents of Native American, African American and Mexican ancestry.[1] In 1871 she married Albert Parsons, a former Confederate soldier. Jeremy Narby Jeremy Narby (born 1959) is an anthropologist and writer. Narby grew up in Canada and Switzerland, studied history at the University of Canterbury, and received a doctorate in anthropology from Stanford University. Narby spent several years living with the Ashaninca in the Peruvian Amazon cataloging indigenous uses of rainforest resources to help combat ecological destruction. Narby has written three books, as well as sponsored an expedition to the rainforest for biologists and other scientists to examine indigenous knowledge systems and the utility of Ayahuasca in gaining knowledge. Since 1989, Narby has been working as the Amazonian projects director for the Swiss NGO, Nouvelle Planète.

Technological singularity The technological singularity is the hypothesis that accelerating progress in technologies will cause a runaway effect wherein artificial intelligence will exceed human intellectual capacity and control, thus radically changing civilization in an event called the singularity.[1] Because the capabilities of such an intelligence may be impossible for a human to comprehend, the technological singularity is an occurrence beyond which events may become unpredictable, unfavorable, or even unfathomable.[2] The first use of the term "singularity" in this context was by mathematician John von Neumann. Proponents of the singularity typically postulate an "intelligence explosion",[5][6] where superintelligences design successive generations of increasingly powerful minds, that might occur very quickly and might not stop until the agent's cognitive abilities greatly surpass that of any human. Basic concepts

Abdullah Öcalan Abdullah Öcalan (/ˈoʊdʒəlɑːn/ OH-jə-lahn;[2] Turkish pronunciation: [ød͡ʒaɫan]; born 4 April 1948), also known as Apo[2][3] (short for both Abdullah and "uncle" in Kurdish),[4][5] is one of the founding members of the militant organization the Kurdistan Workers' Party (PKK) in 1978 in Turkey, which is listed as a terrorist organization internationally by some states and organizations, including NATO, the United States and the European Union.[6][7] Öcalan was arrested in 1999 by the CIA[8] and Turkish security forces in Nairobi and taken to Turkey, where he was sentenced to death under Article 125[9] of the Turkish Penal Code, which concerns the formation of armed gangs. The sentence was commuted to aggravated life imprisonment when Turkey abolished the death penalty in support of its bid to be admitted to membership in the European Union. From prison, Öcalan has published several books, the most recent in 2012. Biography[edit] Kurdish–Turkish conflict[edit]

Alcoa Presents: One Step Beyond Alcoa Presents: One Step Beyond (also known as One Step Beyond) is an American anthology series created by Merwin Gerard. The original series ran for three seasons on ABC from January 1959 to July 1961. Overview[edit] Ames Research Center Missions[edit] Although Ames is a NASA Research Center, and not a flight center, it has nevertheless been closely involved in a number of astronomy and space missions. The Pioneer program's eight successful space missions from 1965 to 1978 were managed by Charles Hall at Ames, initially aimed at the inner solar system. By 1972, it supported the bold flyby missions to Jupiter and Saturn with Pioneer 10 and Pioneer 11.

Daniel Levitin Daniel Joseph Levitin, PhD, FRSC, (born December 27, 1957, San Francisco) is an American cognitive psychologist, neuroscientist, best-selling author, musician and record producer.[1] He is James McGill Professor of psychology and behavioral neuroscience at McGill University in Montreal, Quebec, Canada, with additional appointments in music theory, computer science, and education; Director of the Laboratory for Music Perception, Cognition and Expertise at McGill,[2] and Dean of Arts and Humanities at The Minerva Schools at KGI. He is an elected a Fellow of the American Association for the Advancement of Science, the Association for Psychological Science and the Royal Society of Canada. He has appeared frequently as a guest commentator on NPR and CBC. Biography and education[edit] Music producing, consulting, and e-music career[edit]

Singularity University Singularity University is an unaccredited university[2] located in Silicon Valley whose stated aim is to "educate, inspire and empower leaders to apply exponential technologies to address humanity’s grand challenges."[3] It was founded in the summer of 2008 by Peter Diamandis and Ray Kurzweil in Moffett Field, CA.[3]

Lester Bowie Lester Bowie (October 11, 1941–November 8, 1999)[1] was an American jazz trumpet player[2] and composer. He was a member of the Association for the Advancement of Creative Musicians and cofounded the Art Ensemble of Chicago. Biography[edit] Born in the historic village of Bartonsville in Frederick, Maryland, Bowie grew up in St Louis, Missouri. At the age of five he started studying the trumpet with his father, a professional musician. Michael Persinger Michael A. Persinger (born June 26, 1945) is a cognitive neuroscience researcher and university professor with over 200 peer-reviewed publications. He has worked at Laurentian University, located in Sudbury, Ontario, since 1971. He is primarily notable for his experimental work in the field of neurotheology, work which has been increasingly criticized in recent years.[1][3][4][5][6] Early life[edit] Research and academic work[edit]