The mental and metaphysical effects of microdosing LSD. It’s 7am on the uBahn. 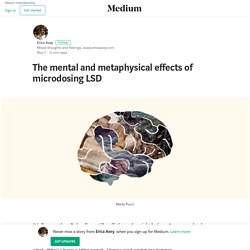 Eyes still puffy from the night before. A woman slowly nibbles her morning brötchen while staring into the static on the broken TV above. Blog - How To Make Yourself Hallucinate Without Drugs.

Ketamine quickly lifts depression via a byproduct of its metabolism, study finds. A chemical byproduct, or metabolite, created as the body breaks down ketamine likely holds the secret to its rapid antidepressant action, National Institutes of Health (NIH) scientists and grantees have discovered. 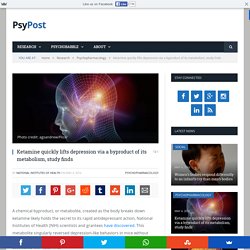 This metabolite singularly reversed depression-like behaviors in mice without triggering any of the anesthetic, dissociative, or addictive side effects associated with ketamine. LSD could make you smarter, happier and healthier. Should we all try it? (John Jay Cabuay for The Washington Post) In 1970, Congress dropped psychedelics into the war on drugs. 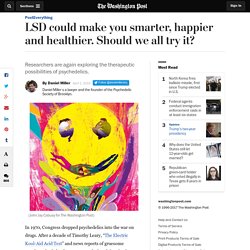 After a decade of Timothy Leary, “The Electric Kool-Aid Acid Test” and news reports of gruesome murders, the federal government declared that the drugs had no medical use — and high potential for abuse. The chairman of New Jersey’s Narcotic Drug Study Commission called LSD “the greatest threat facing the country today . . . more dangerous than the Vietnam War.” But over the past decade, some scientists have begun to challenge that conclusion. Far from being harmful, they found, hallucinogens can help sick people: They helped alcoholics drink less; terminal patients eased more gently into death. Psychedelics and the Gift of Subjectivity – Thomas T. Berry. Jung’s study of inner experience makes him an intriguing figure to investigate vis-a-vis psychedelics. 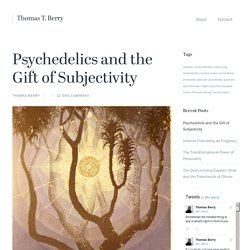 The following is an attempt to understand the mechanisms of change whereby psychedelic experiences leads to transformation by comparing it to similar states of consciousness, utilizing research and Jungian theory. Onetime party drug hailed as miracle for treating severe depression. LSD enhances the emotional response to music. Rationale There is renewed interest in the therapeutic potential of psychedelic drugs such as lysergic acid diethylamide (LSD). 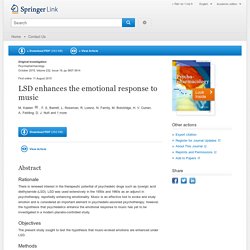 LSD was used extensively in the 1950s and 1960s as an adjunct in psychotherapy, reportedly enhancing emotionality. Psychedelic-Assisted Therapy – The Mental Health Trip of the Future? If I told you we could condense years of successful therapy, safely, down to a few hours using currently illegal psychedelic drugs would you believe me? 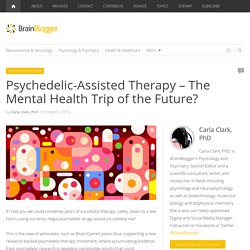 This is the view of advocates, such as Brain Game’s What is psychedelic therapy? The term “psychedelic” literally means “mind-revealing” or “mind-manifesting”, although colloquially the word has been synonymously linked with psychedelic drugs (hallucinogens). This is largely due to the idea that psychedelic drugs allow us to tap into our subconscious by altering the filtration of perceptions, thoughts and emotions from reaching the conscious mind. Psychedelic therapy refers to an approach to treating mental health problems using psychedelic drugs as an adjunct to psychotherapy, arising in the early 1950s following the first published scientific study on lysergic acid diethylamide (LSD). Scientists Are Discovering a Surprisingly Healthy Reason to Use MDMA. Ecstasy research: Scientists find MDMA could help tackle pathological self-criticism. MDMA or “ecstasy” can help reduce self-criticism and increased self-compassion, according to preliminary research published in the Journal of Psychopharmacology. 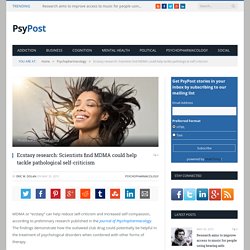 The findings demonstrate how the outlawed club drug could potentially be helpful in the treatment of psychological disorders when combined with other forms of therapy. Self-criticism is a normal part of the human experience — but sometimes criticizing oneself can get out of hand. Excessive self-criticism is feature of a number of psychological disorders, the United Kingdom researchers note in their study, including eating disorders, depression, social anxiety, schizophrenia, and personality disorders. “Finding effective ways of dealing with self-criticism therefore remains a priority for psychiatry and clinical psychology,” the researchers said. “Various lines of research support the use of self-compassion-enhancing strategies to overcome the effects of self-criticism. The study by Sunjeev K. Psychophysics for Psychedelic Research: Textures. In this post I will provide an account of my personal research project to understand the algorithms that underly human visual pattern-recognition. 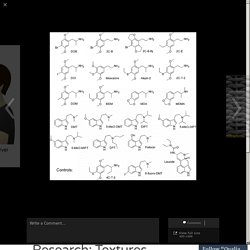 This project is multidisciplinary in nature, combining paradigms from three fields: (1) the analysis and synthesis of textures, (2) psychophysics and (3) psychedelic research. I will explain in detail how these areas can synergistically help us understand the computational properties of consciousness. In the process of doing so I will describe some of the work I have done in this direction. tl;dr: With texture synthesis algorithms we can control the statistical features present in textures. By using an odd-one-out paradigm where participants have to find the “different texture” we can identify the statistical signatures of the visual patterns people can perceive.

Introduction to Spatial Patterns. Crowd Funding the Psychedelic Renaissance. LSD research is experiencing a renaissance, with an influx of financing coming from internet crowdfunding sites like Walacea, Indiegogo, and Reddit. 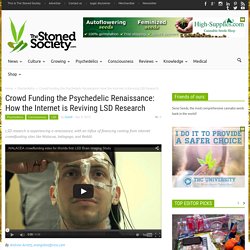 By Andrew Arnett, orangebeefpress.com On London-based Walacea, the Beckley Foundation for Psychedelic Research has raised £48,804.00 for a study dubbed “The World’s First Study of the Brain on LSD.” This research will use MRI scanners to determine how LSD influences creativity and problem solving in the human brain. Safer than riding a bike? Scientists promote medicinal use of psychedelic drugs — RT UK. Published time: April 08, 2015 16:11 (Reuters/U.S. 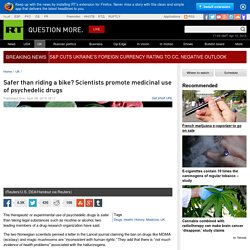 DEA/Handout via Reuters) No link found between psychedelics and psychosis. Getty Images/MattLyon An image inspired by the reported experiences of psychedelic drug users. Anecdotal evidence of 'acid casualties' — users who develop chronic psychoses —is not supported by data from large populations, researchers say. Data from population surveys in the United States challenge public fears that psychedelic drugs such as LSD can lead to psychosis and other mental-health conditions and to increased risk of suicide, two studies have found1, 2.

In the first study, clinical psychologists Pål-Ørjan Johansen and Teri Suzanne Krebs, both at the Norwegian University of Science and Technology in Trondheim, scoured data from the US National Survey on Drug Use and Health (NSDUH), an annual random sample of the general population, and analysed answers from more than 135,000 people who took part in surveys from 2008 to 2011. The findings are likely to raise eyebrows. The three substances Johansen and Krebs looked at all act through the brain’s serotonin 2A receptor. Ayahuasca psychedelic tested for depression. Lunae Parracho/Reuters/Corbis Ayahuasca being prepared for a healing ritual in the Brazilian village of Novo Segredo. A psychedelic drink used for centuries in healing ceremonies is now attracting the attention of biomedical scientists as a possible treatment for depression. Researchers from Brazil last month published results from the first clinical test of a potential therapeutic benefit for ayahuasca, a South American plant-based brew1.

Although the study included just six volunteers and no placebo group, the scientists say that the drink began to reduce depression in patients within hours, and the effect was still present after three weeks. They are now conducting larger studies that they hope will shore up their findings. Could Psychedelic Drugs Be Good For You? Journal of Psychopharmacology. Introduction The classical psychedelics lysergic acid diethylamide (LSD), psilocybin (magic mushrooms) and mescaline (peyote and other cacti) have their primary mechanism of action at the serotonin 2A (5-HT2A) receptor, elicit similar, often indistinguishable effects and show cross-tolerance (Bonson, 2012). Over 30 million adults in the United States (US) have tried psychedelics (approximately one in six adults aged 21–64 years) (Krebs and Johansen, 2013a). Psychedelics are not known to harm the brain or other body organs or to cause addiction or compulsive use (Halberstadt, 2015; Bonson, 2012). Psychedelics are well known for inducing profound effects on the mind, which sometimes include confusion and emotional turmoil (McWilliams and Tuttle, 1973).

Psychedelics often elicit deeply personally and spiritually meaningful experiences and sustained beneficial effects (Carhart-Harris and Nutt, 2010; Griffiths et al., 2008, 2011; Morgan et al., 2010). Classic psychedelic use reduced suicidal thinking, attempts. When Silicon Valley takes LSD - Jan. 25, 2015. NEW YORK (CNNMoney) Herbert, who works at Cisco, has been in the tech sphere for decades. For him, geek-dom and psychedelics have intersected since the start of his adult life: The first LSD he took was created in an M.I.T. lab at and consumed at a science fiction convention.

In Silicon Valley, there is a premium on creativity, and tools thought to induce or enhance it are avidly sought. Some view psychedelics as a weapon in the arsenal, a way to approach problems differently. There's no definitive scientific evidence that LSD or other hallucinogens improve creativity, and the DEA classifies LSD as a highly addictive, Schedule I drug. For people like Herbert, 51, Silicon Valley today feels a bit like the '70s all over again. News - Classic psychedelic use found to be protective with regard to psychological distress and suicidality, study finds.

Classic psychedelic drugs include LSD, psilocybin and mescaline. This new School of Public Health research is published in the Journal of Psychopharmacology. Classic psychedelics, such as LSD, psilocybin mushrooms and mescaline, previously have been shown to occasion lasting improvements in mental health. But researchers led by University of Alabama at Birmingham School of Public Health investigators wanted to advance the existing research and determine whether classic psychedelics might be protective with regard to suicidal thoughts and behaviors.

Approximately 30,000 lives in the United States are claimed by suicide every year, and more than 90 percent of victims have been diagnosed with mental illness, according to the National Alliance on Mental Illness. “Despite advances in mental health treatments, suicide rates generally have not declined in the past 60 years. Hallucinogens Have Doctors Tuning In Again. Nothing had any lasting effect until, at the age of 65, he had his first psychedelic experience. How Psychedelics Are Saving Lives. Stanislav Grof. Recovery- an alcoholic's story & the reemergence of psychedelic medicine.

The Psychedelic Library Homepage. Pioneers in Psychedelic Research: Stan Grof. World Leaders Propose to Legalize All Drugs: 5 Major Changes in Global Policy. In a radical move, the former presidents of Brazil, Chile, Colombia, Mexico, Poland, Portugal and Switzerland joined hands with political and industrial heavy-weights Kofi Annan, Richard Branson, George Shultz, Paul Volcker and others to foster a paradigm shift in how our world perceives and regulates drugs. They, the Global Commission on Drug Policy, just published a groundbreaking report “Taking Control: Pathways to Drug Policies that Work” which argues that the War on Drugs has been a colossal failure and something has to change.

HRI News HRI News. How Underground Therapists and Scientists Keep Psychedelic Medicine Alive Despite the Gov't Ban. Photo Credit: Shots Studio / Shutterstock.com. Study: Psychedelics Help Keep Former Inmates Out Of Prison. Anti-anhedonic effect of ketamine and its ... [Transl Psychiatry. 2014] Interviews with People Who Just Smoked DMT. Dimethyltryptamine is so hot right now. Ever since Enter the Void and DMT: The Spirit Molecule showed up on Netflix Instant, kids have been going gaga over this technology from another dimension. Could LSD Provide a Possible Cure for ADHD? - Crows Nest Center for Shamanic Studies. LSD enhances suggestibility in healthy volunteers.