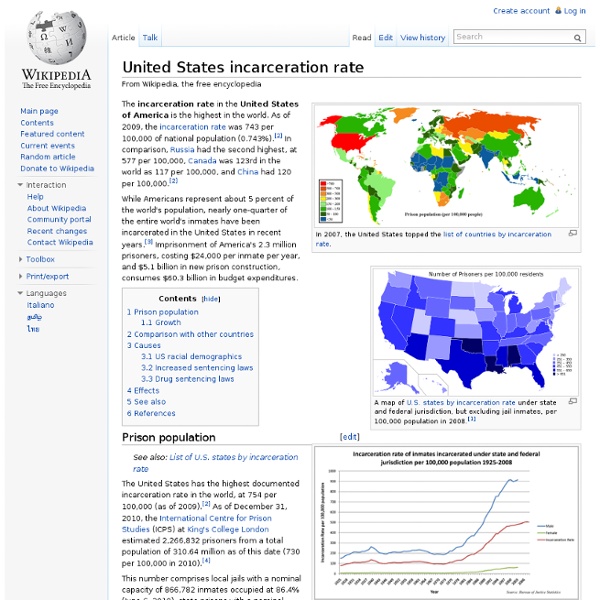 The incarceration rate in the United States of America is the highest in the world. As of 2009[update], the incarceration rate was 743 per 100,000 of national population (0.743%).[2] While the United States represents about 5 percent of the world's population, it houses around 25 percent of the world's prisoners.[3][4] Imprisonment of America's 2.3 million prisoners, costing $24,000 per inmate per year, and $5.1 billion in new prison construction, consumes $60.3 billion in budget expenditures. Prison population[edit] The United States has the highest documented incarceration rate in the world, at 754 per 100,000 (as of 2009[update]).[2] As of December 31, 2010, the International Centre for Prison Studies (ICPS) at King's College London estimated 2,266,832 prisoners from a total population of 310.64 million as of this date (730 per 100,000 in 2010).[5] The imprisonment rate varies widely by state; Louisiana surpasses this by about 100%, but Maine incarcerates at about a fifth this rate.

Execution van The execution van, also called a mobile execution unit, was developed by the government of the People's Republic of China and were first used in 1997. There is evidence that mobile execution chambers existed before 1997: the state of Delaware in the United States of America purchased a mobile lethal-injection chamber in 1986.[1] The prisoner is strapped to a stretcher and killed inside the van. The van allows death sentences to be carried out without moving the prisoner to an execution ground. The vans also require less manpower per execution, requiring four persons to assist with the injection.[2] The PRC states that the vans are more humane than previous forms of execution. Human-rights groups predict that the execution rate in China will increase because of mobile capital punishment.[3] Use[edit] After the 1997 decision to legalize lethal injection as a form of execution, PRC officials began using execution vans across China. Controversy[edit] Notable executions[edit] See also[edit]

Videos - FORA.tv - Ethan Watters: The Globalization of the American Psyche Bio Todd Oppenheimer Todd Oppenheimer works as a journalist at The Writers' Grotto. During his 25 years as a journalist, Oppenheimer has won a variety of national awards for his writing and investigative reporting and has appeared on numerous radio and television programs, including ABC's "Nightline." His articles have appeared in The New Yorker, Newsweek, The Atlantic Monthly, The Washington Post, Columbia Journalism Review, Mother Jones, and an assortment of daily and weekly newspapers. He is the author of The Flickering Mind: Saving Education from the False Promise of Technology, a finalist for the Investigative Reporters and Editors Book Award. Ethan Watters Ethan Watters is the author of Urban Tribes, an examination of the mores of affluent "never marrieds" and the coauthor of Making Monsters, a groundbreaking indictment of the recovered memory movement. To download this program become a Front Row member. ZOOM IN: Learn more with related books and additional materials. globalization

I Want To Learn Game Theory : IWantToLearn IWTL Hot to Shuffle Dance : IWantToLearn Classical Rhetoric 101: The Five Canons of Rhetoric- Memory Welcome back to our series on Classical Rhetoric. Today we’re continuing our five-part segment on the Five Canons of Rhetoric. So far we’ve covered the canons of invention, arrangement, and style. The Three Elements of the Canon of Memory 1. Anciently, almost all rhetorical communication was done orally in the public forum. If men learn this, [the art of writing] it will implant forgetfulness in their souls: they will cease to exercise memory because they rely on that which is written, calling things to remembrance no longer from within themselves. So if you were an ancient Greek and busted out some speech notes in the Assembly, you’d probably be laughed at and mocked as weak-minded. In modern times, we still lend more credence to speakers who give their speeches (or at least appear to) from memory. This truth isn’t just limited to the POTUS. 2. For ancient orators, the rhetorical canon of memory wasn’t just about the importance of giving speeches extemporaneously. 3. Tagged as: rhetoric

Classical Rhetoric 101: The Five Canons of Rhetoric-Style Welcome back to our series on Classical Rhetoric. Today we’re continuing our five-part segment on the Five Canons of Rhetoric. So far we’ve covered the canons of invention and arrangement. As a quick review, the canon of invention is about brainstorming ideas for your speech or writing, and arrangement is about organizing your speech or text to ensure maximum persuasion. Today we’re discussing the canon of style. Let’s begin. What Is Style? When people write memos or give persuasive speeches, the focus is usually on what they’re going to write or say. A mentor of mine gave me a great object lesson on the importance of style when crafting a message. The other was a medium-sized box, wrapped with handsome looking wrapping paper and topped with a giant green bow. “Pick which present you’d like.” I picked the nicely wrapped present partly because I had an idea of what he was trying to teach me and wanted to play along, and partly because I just liked how it looked. The lesson was obvious. 1.

Classical Rhetoric 101: The Five Canons of Rhetoric- Arrangement Welcome back to our series on Classical Rhetoric. Today we’re continuing our five-part segment on the Five Canons of Rhetoric. Last time we discussed invention, which is essentially brainstorming and planning your speech or writing. In this installment, we’ll be exploring the canon of arrangement. Let’s get started. What Is Arrangement? Arrangement is simply the organization of a speech or text to ensure maximum persuasion. Introduction (exordium)Statement of Facts (narratio)Division (partitio)Proof (confirmatio)Refutation (refutatio)Conclusion (peroratio) If you’ve taken debate or philosophy classes, you’ve probably seen this format for organizing a speech or paper. 1. There are two aspects of an effective introduction: 1) introducing your topic and 2) establishing credibility. Introducing your topic. Your introduction is crucial for the success of your speech or essay. So how can you announce your subject in a way that grabs your audience’s attention? Establishing credibility. 2. 3. 4.

Classical Rhetoric: The Three Means of Persuasion Welcome back to our ongoing series on classical rhetoric. Today we’ll cover the three means of persuasion as set forth by Aristotle in The Art of Rhetoric. According to Aristotle, a speaker or writer has three ways to persuade his audience: Of the modes of persuasion furnished by the spoken word there are three kinds. The first kind depends on the personal character of the speaker; the second on putting the audience into a certain frame of mind; the third on the proof, or apparent proof, provided by the words of the speech itself. Below we cover the basics of the three means of persuasion and offer a few suggestions on how to implement them into your rhetorical arsenal. Ready to get started? Ethos: The Appeal to the Speaker’s or Writer’s Character or Reputation If you wish to persuade, you need to establish credibility and authority with your audience. A speaker or writer can use ethos in several ways. Living a life of virtue is perhaps the best way to develop ethos. All men are mortal.

Classical Rhetoric: A Brief History This is the second in a series on classical rhetoric. In this post, we lay the foundation of our study of rhetoric by taking a look at its history. While this post is in no way a comprehensive history of rhetoric, it should give you enough background information to understand the context of the principles we’ll be discussing over the next few months. Humans have studied and praised rhetoric since the early days of the written word. The Mesopotamians and Ancient Egyptians both valued the ability to speak with eloquence and wisdom. Rhetoric in Ancient Greece: The Sophists Many historians credit the ancient city-state of Athens as the birthplace of classical rhetoric. The Sophists would travel from polis to polis teaching young men in public spaces how to speak and debate. Sophists prided themselves on their ability to win any debate on any subject even if they had no prior knowledge of the topic through the use of confusing analogies, flowery metaphors, and clever wordplay.

Classical Rhetoric: An Introduction As many of you know, I read a lot of biographies on the lives of great men from history. The part of a man’s life I enjoy learning about the most is their education. What books did they read as young men that influenced them later on in life? Where did they travel? What classes did they take while at university? One thing I’ve noticed about my manly heroes is they all took courses in rhetoric at some point during their education. But in the early part of the 20th century, a shift in education occurred. Which is quite unfortunate. Our economy and society in the West in general are becoming increasingly knowledge and information based; the ability to communicate effectively and persuasively is more essential to success than ever before. If you’re like many men today, you didn’t spend much time learning about the art of rhetoric growing up. What Is Rhetoric? Rhetoric is simply the art of persuasion through effective speaking and writing. Why Study Rhetoric? Magnifies your influence as a man.