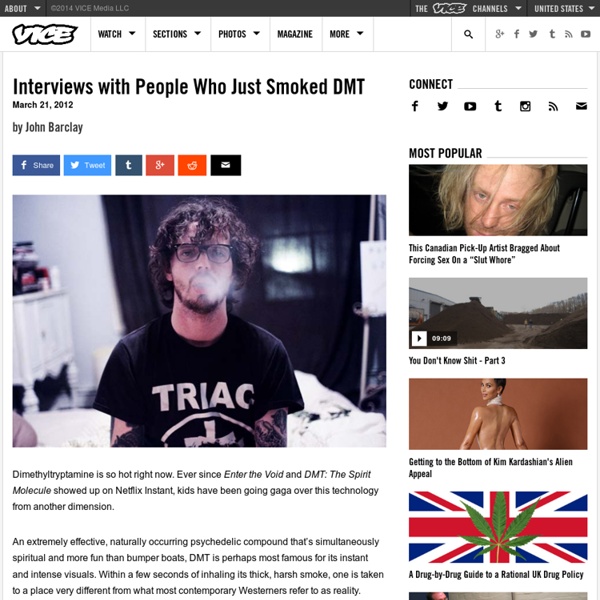 Dimethyltryptamine is so hot right now. Ever since Enter the Void and DMT: The Spirit Molecule showed up on Netflix Instant, kids have been going gaga over this technology from another dimension. An extremely effective, naturally occurring psychedelic compound that’s simultaneously spiritual and more fun than bumper boats, DMT is perhaps most famous for its instant and intense visuals. Within a few seconds of inhaling its thick, harsh smoke, one is taken to a place very different from what most contemporary Westerners refer to as reality. Jodie I felt what God was like. It was like time traveling, but it wasn’t time before or after, it was just adjacent to us. Your bodies were, like, singing—everything you were doing was like a song. Oren That was the most intense thing ever. Taylor It hit really fast. I felt really physically heavy. Adam At first it was like straight up kaleidoscopic. Sarah Everything looked like a painting. Victor The visual side of things was like doing acid or mushrooms.

R.S.E.) | Bubble Bags, Leaf Trimmers, Bowl Trimmers, Gibberellic Acid, GA3, Feminzation, Feminized, Seeds, Hormones :: Home :: Surreal Artwork by James McCarthy This Blog Linked From Here The Web Wednesday, 12 March 2014 Surreal Artwork by James McCarthy Posted by Sam Woolfe at 14:43 Email ThisBlogThis! 7 comments: Load more... Newer PostOlder PostHome The Amityville Murders Ronald Joseph "Big Ronnie" DeFeo, Sr. was born on November 16, 1930, to parents Rocco and Antoinette DeFeo. When he was younger, Big Ronnie was slender, handsome, and had a powerful gaze reminiscent of Rudolph Valentino’s. With his suave looks, he was able to attract the attention of Louise Marie Brigante. Born on November 3, 1931 to Michael and Angela Brigante, Louise had wanted to pursue a modeling career. After a brief courtship, Big Ronnie and Louise got married. Growing up, Butch DeFeo had it hard. Louise’s brother, Michael Brigante Jr., would later testify at the DeFeo trial about an incident he witnessed when Butch was two years old. As a child, Butch was extremely overweight, and would remain so until his later teenage years when he began using amphetamines. Butch was not an only child for long. Sometime after the birth of Marc, Louise decided to leave her husband for reasons that remain unclear. On October 24, 1965, Big Ronnie was blessed with a third son, John Matthew DeFeo.

Silk-Dyed Eggs {aka TIE-Dyed!} I posted this tutorial a few years ago and it has become somewhat of a tradition to bring it back every year! One of our family Easter traditions is dying eggs with pieces of silk. I saw a cute lady show Martha how to do it a few years ago and I ran upstairs right then to steal a tie! Here’s the run-down: You need 100% silk for this to work. I try to find an assortment of colors and patterns. Usually it will tell you if it’s 100% silk right on the main label of the tie, but a lot of them don’t, and if that’s the case, check that little tiny end, it’s usually hiding there. The first step is to deconstruct the tie. Next you cut a piece large enough to cover an egg. Now, notice how I tied the eggs in the above photo- with the tie on the top of the long side of the egg. However, if you want the best part of the design on the wide side of the egg, you’ll want to wrap them horizontally, like this: Just wrap them as smoothly and tightly as you can for the best transfer. Gorgeous. Love it?

Hallucinogenic Drugs in Psychiatric Research and Treatment The Psychedelic Library Homepage Psychedelic Renaissance Menu Rick J. Strassman, M.D. The Journal of Nervous and Mental Disease, Vol. 183, No. 3, pp. 127-138. ©1995 Williams & Wilkins Clinical research with hallucinogens has resumed after a generation's hiatus. Hallucinogenic substances found in fungi, plants, and animals have been used on all continents, and in a wide variety of cultures, both highly advanced and preliterate (Dobkin de Rios, 1984). Nomenclature Many terms have been used to describe the effects of these drugs, including psychedelic (mind manifesting), psychodysleptic (disturbing the mind), phantasticant, psychotogen, oneirogen (producing dreams), entheogen (generating religious experience), phanerothyme (making feelings visible), psychotomimetic, and schizotoxin (Grinspoon and Bakalar, 1979; Stafford, 1992). Prevalence of Use Hallucinogen use in the United States remained relatively constant from the late 1960s to the late 1980s (Pope et al., 1990). Legal Status Tolerance

Humphry Osmond Humphry Fortescue Osmond (1 July 1917 – 6 February 2004) was a British psychiatrist known for inventing the word psychedelic and for his research into interesting and useful applications for psychedelic drugs. Osmond also explored aspects of the psychology of social environments, in particular how they influenced welfare or recovery in mental institutions. Biography[edit] Osmond was born in Surrey and educated at Haileybury.[1] As a young man, he worked for an architect and attended Guy's Hospital Medical School at King's College London. While active as a surgeon-lieutenant in the Navy during World War II, Osmond trained to become a psychiatrist. Work with psychedelics[edit] After the war, Osmond and his colleague John Smythies perceived a similarity between the effects of LSD and the early stages of schizophrenia. At Weyburn, Osmond recruited a group of research psychologists to turn the hospital into a design-research laboratory. Involvement with the Native American Church[edit]

Hallucinogens Have Doctors Tuning In Again Nothing had any lasting effect until, at the age of 65, he had his first psychedelic experience. He left his home in Vancouver, Wash., to take part in an experiment at Johns Hopkins medical school involving psilocybin, the psychoactive ingredient found in certain mushrooms. Scientists are taking a new look at hallucinogens, which became taboo among regulators after enthusiasts like Timothy Leary promoted them in the 1960s with the slogan “Turn on, tune in, drop out.” Now, using rigorous protocols and safeguards, scientists have won permission to study once again the drugs’ potential for treating mental problems and illuminating the nature of consciousness. After taking the hallucinogen, Dr. Martin put on an eye mask and headphones, and lay on a couch listening to classical music as he contemplated the universe. “All of a sudden, everything familiar started evaporating,” he recalled. Today, more than a year later, Dr. In one of Dr. Since that study, which was published in 2008, Dr.

Concord Prison Experiment The Concord Prison Experiment was designed to evaluate whether the experiences produced by the psychoactive drug psilocybin, derived from psilocybin mushrooms, combined with psychotherapy, could inspire prisoners to leave their antisocial lifestyles behind once they were released. How well it worked was to be judged by comparing the recidivism rate of subjects who received psilocybin with the average for other Concord inmates. Staff[edit] The experiment was conducted between 1961–1963 in Concord State Prison, a maximum-security prison for young offenders, in Concord, MA by a team of Harvard University researchers under the direction of Timothy Leary, which included Michael Hollingshead, Dr. Allan Cohen, Dr. Alfred Alschuder, Dr. Results[edit] Records at Concord State Prison suggested that 64 percent of the 32 subjects would return to prison within six months after parole. Follow-up study[edit] Related research[edit] See also[edit] References[edit]

Take LSD, stay out of prison? Huge study links psychedelic use to reduced recidivism A study of more than 25,000 people under community corrections supervision suggests the use of psychedelic drugs like LSD can keep people out of prison. The research is the first in 40 years to examine whether drugs like LSD and “magic” mushrooms can help reform criminals. “Our results provide a notable exception to the robust positive link between substance use and criminal behavior,” the researchers from the University of Alabama at Birmingham and Johns Hopkins University School of Medicine wrote in their study, which was published in the January issue of the Journal of Psychopharmacology. “They add to both the older and emerging body of data indicating beneficial effects of hallucinogen interventions, and run counter to the legal classification as well as popular perception of hallucinogens as categorically harmful substances with no therapeutic potential.” Psychedelic substances piqued the interest of researchers beginning in the 1950s. The study was authored by Peter S.