Why psychedelic drugs might help cure anxiety and addiction, explained in 50+ studies. Welcome to Show Me the Evidence, where we go beyond the frenzy of daily headlines to take a deeper look at the state of science around the most pressing health questions of the day. 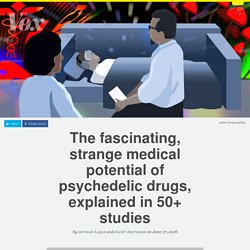 After years of struggling with treatments for his worsening cancer, Roy was miserable — anxious, depressed, hopeless. Traditional cancer treatments had left him debilitated, and it was unclear whether they would save his life. But then Roy secured a spot in a clinical trial to test an exotic drug. The drug was not meant to cure his cancer; it was meant to cure his terror. And it worked. It was not a traditional antidepressant, like Zoloft, or anti-anxiety medication, like Xanax, that led Roy to reevaluate his life. Psychologists and psychiatrists have been studying hallucinogens for decades — as treatment for things like alcoholism and depression, and to stimulate creativity. Andrew Feldmar - LSD, MDMA, & Therapy. Profound Psilocybin Experience by Harvard Professor, Ram Dass aka Richard Alpert.

Why the government should be funding mass scientific studies of Ecstasy, magic mushrooms, and LSD. Medical drugs are pretty nice. 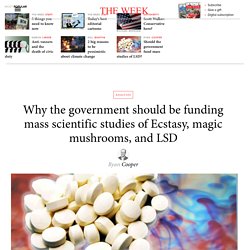 From antibiotics to chemotherapy to good old aspirin, not a day goes by that millions of people don't benefit from pharmaceutical medicine — even granting the occasional disaster. But the American model of drug development is badly flawed. We use a patent system, so new drugs that make it through the approval process can enjoy a government-granted monopoly to make back the initial investment.

But for treatments in which the patent doesn't work — either because the drug won't be widely used, or because it is already in the public domain — our system comes up short. Two recent stories, regarding antibiotics and psychedelics, including LSD and Ecstasy, illustrate the problem, as well as the solution. Undoubtedly the more serious problem is with antibiotics, which are basically the foundation of modern medicine.

Furthermore, our current stock of antibiotics is being eclipsed by bacterial evolution, which makes diseases more resistant to drugs. The Trip Treatment. On an April Monday in 2010, Patrick Mettes, a fifty-four-year-old television news director being treated for a cancer of the bile ducts, read an article on the front page of the Times that would change his death. 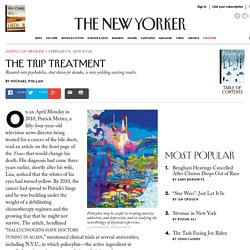 His diagnosis had come three years earlier, shortly after his wife, Lisa, noticed that the whites of his eyes had turned yellow. By 2010, the cancer had spread to Patrick’s lungs and he was buckling under the weight of a debilitating chemotherapy regimen and the growing fear that he might not survive. The article, headlined “Hallucinogens Have Doctors Tuning in Again,” mentioned clinical trials at several universities, including N.Y.U., in which psilocybin—the active ingredient in so-called magic mushrooms—was being administered to cancer patients in an effort to relieve their anxiety and “existential distress.”

Patrick made the call anyway and, after filling out some forms and answering a long list of questions, was accepted into the trial. The clinical trials at N.Y.U. Xenolinguistics - Psychedelics & Language. When Silicon Valley takes LSD - Jan. 25, 2015. NEW YORK (CNNMoney)

Marijuana's long-term effects on the brain demonstrated. The effects of chronic marijuana use on the brain may depend on age of first use and duration of use, according to researchers at the Center for BrainHealth at The University of Texas at Dallas. 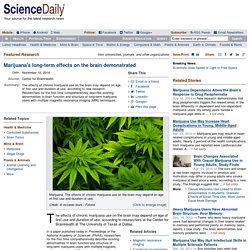 "We have seen a steady increase in the incidence of marijuana use since 2007," said Dr. Francesca Filbey, Director of the Cognitive Neuroscience Research in Addictive Disorders at the Center for BrainHealth and Associate Professor in the School of Behavioral and Brain Sciences at The University of Texas at Dallas. The War on Drugs Is Burning Out. The conservative wave of 2014 featured an unlikely, progressive undercurrent: In two states, plus the nation's capital, Americans voted convincingly to pull the plug on marijuana prohibition. 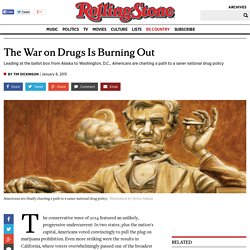 Even more striking were the results in California, where voters overwhelmingly passed one of the broadest sentencing reforms in the nation, de-felonizing possession of hard drugs. One week later, New York Mayor Bill de Blasio and the NYPD announced an end to arrests for marijuana possession. It's all part of the most significant story in American drug policy since the passage of the 21st Amendment legalized alcohol in 1933: The people of this country are leading a dramatic de-escalation in the War on Drugs. November's election results have teed up pot prohibition as a potent campaign issue for 2016. Rick Doblin: Psychedelics, Social Change, and Cultural Revolution. Transcending Boundaries: Identity and Oppression Within Psychedelic Culture - The Nexian. By VTSeeker48 on Wednesday, 26 November 2014, hits: 2001 “Psychedelics are illegal not because a loving government is concerned that you may jump out of a third story window. 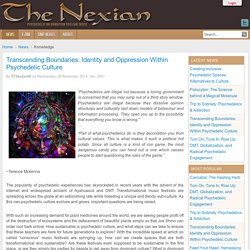 Psychedelics are illegal because they dissolve opinion structures and culturally laid down models of behaviour and information processing. TRETA-YUGA #1 by Benton Rooks. TRETA-YUGA is the stand-alone sequel to my previous debut Kickstarter success KALI-YUGA. 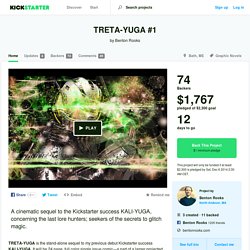 It will be 24 page, full color single issue comic—a part of a larger projected graphic novel and the extended lore of the YUGAVERSE. [*New readers do not need be familiar with KALI-YUGA in order to begin reading TRETA-YUGA.*] I've been microdosing LSD and mushrooms every two days for a period lasting 4 months. Here is what I've learned from using it in various situations. : Psychonaut. Allen Ginsberg's LSD poem to William Buckley. Notes from the Psychedelic Salon » Quotes, comments, and audio files from Lorenzo's podcasts. Guest speaker: Terence McKennaListen Download Subscribe MP3 Free PCs – Right click, select option Macs – Ctrl-Click, select option Terence McKenna [NOTE: All quotations are by Terence McKenna.] “A psychedelic point of view means a point of view which honors consciousness.”

WHY ARE PILLS SO STRONG AT THE MOMENT? Words: Mike Power A batch of super-strong pills pressed in the shape of the UPS logo are currently in circulation in the UK. 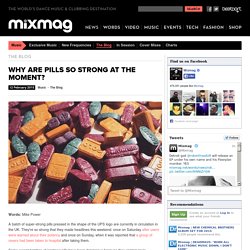 They're so strong that they made headlines this weekend: once on Saturday after users were warned about their potency and once on Sunday, when it was reported that a group of ravers had been taken to hospital after taking them. Some recent batches of 'ecstasy' pills have been dangerous because they contain toxic ingredients, such as PMMA, and are sold by dodgy dealers as the real thing. But the UPS pills may be potentially harmful because they are so strong. Some UPS pills have been found containing up to 278mg of MDMA – that’s over a quarter of a gram – or three or four times more powerful than a standard-issue UK pill (see here for reports from users).

Scientists Have Discovered Why Magic Mushrooms Are So 'Magical' The news: Psilocybin, the psychoactive chemical that puts the magic in magic mushrooms, has long been known to act on serotonin receptors in the brain. 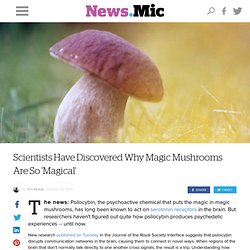 But researchers haven't figured out quite how psilocybin produces psychedelic experiences -- until now. New research published on Tuesday in the Journal of the Royal Society Interface suggests that psilocybin disrupts communication networks in the brain, causing them to connect in novel ways. Mythaphi Watch Huachuma - Mythaphi. The Path of The Sun. How marijuana legalization in Colorado and Washington is making the world a better place.

Section Grower Morgan Blenk inspects a marijuana plant clone before planting it at Tweed Marijuana Inc in Smith's Falls, Ontario. REUTERS/Blair Gable No pressure, Colorado and Washington, but the world is scrutinizing your every move. That was the take-home message of an event today at the Brookings Institution, discussing the international impact of the move toward marijuana legalization at the state-level in the U.S. Laws passed in Colorado and Washington, with other states presumably to come, create a tension with the U.S. obligations toward three major international treaties governing drug control. Historically the U.S. has been a strong advocate of all three conventions, which "commit the United States to punish and even criminalize activity related to recreational marijuana," according to Brookings' Wells Bennet.

The U.S. response to this tension has thusfar been to call for more "flexibility" in how countries interpret them. Sandeep Chawla, former deputy director of the U.N.