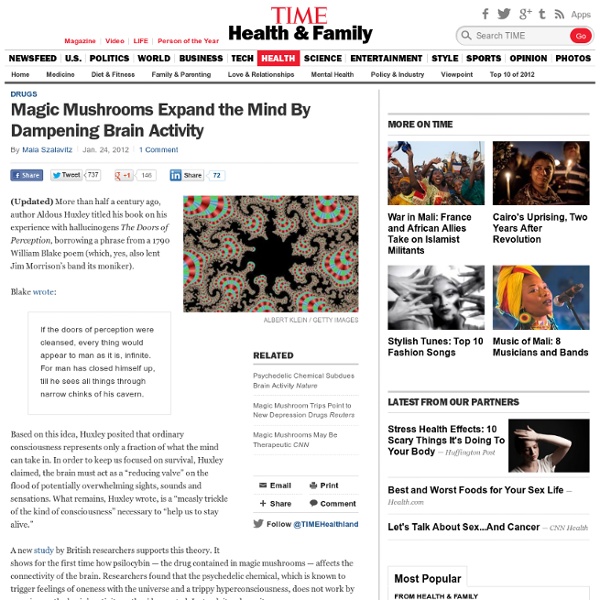 (Updated) More than half a century ago, author Aldous Huxley titled his book on his experience with hallucinogens The Doors of Perception, borrowing a phrase from a 1790 William Blake poem (which, yes, also lent Jim Morrison’s band its moniker). Blake wrote: If the doors of perception were cleansed, every thing would appear to man as it is, infinite. For man has closed himself up, till he sees all things through narrow chinks of his cavern. Based on this idea, Huxley posited that ordinary consciousness represents only a fraction of what the mind can take in. In order to keep us focused on survival, Huxley claimed, the brain must act as a “reducing valve” on the flood of potentially overwhelming sights, sounds and sensations. A new study by British researchers supports this theory. Under the influence of mushrooms, overall brain activity drops, particularly in certain regions that are densely connected to sensory areas of the brain.

10 Enormous Numbers Technology One of the first questions that kids often ask is “What is the biggest number?” This question is an important step in transitioning to a world of abstract concepts. The answer is of course that numbers are generally considered endless, but there gets to be a point were numbers become so big that there really is no point in having them, they have no real importance outside of the fact that yes technically they do exist. Ten to the eightieth power – a 1 with 80 zeros after it – is quite massive but somewhat tangible at least from a relatively concrete point of view. The word googol, with a slightly different spelling, has become a frequently used verb in modern times, thanks to a highly popular search engine. A Plank length is extremely small, approximately 1.616199 x 10-35 meters, or in long form 0.00000000000000000000000000000616199 meters. The third largest number on this list, the number of all the plank volumes in the universe, consists of 185 digits. Sorry, had to do it.

Mind-Blowing Story: “Talking to God…” I met god the other day. I know what you’re thinking. How the hell did you know it was god? Well, I’ll explain as we go along, but basically he convinced me by having all, and I do mean ALL, the answers. Which is odd, because I’m still an atheist and we even agree on that! It all started on the 8.20 back from Paddington. What did he look like? Well not what you might have expected that’s for sure. ‘Anyone sitting here?’ ‘Help yourself’ I replied. Sits down, relaxes, I ignore and back to the correspondence on genetic foods entering the food chain… Train pulls out and a few minutes later he speaks. ‘Can I ask you a question?’ Fighting to restrain my left eyebrow I replied ‘Yes’ in a tone which was intended to convey that I might not mind one question, and possibly a supplementary, but I really wasn’t in the mood for a conversation. .. ‘Why don’t you believe in god?’ The Bastard! I love this kind of conversation and can rabbit on for hours about the nonsense of theist beliefs. ‘Who am I?’ ‘Stottle.

Twelve Virtues of Rationality The first virtue is curiosity. A burning itch to know is higher than a solemn vow to pursue truth. To feel the burning itch of curiosity requires both that you be ignorant, and that you desire to relinquish your ignorance. If in your heart you believe you already know, or if in your heart you do not wish to know, then your questioning will be purposeless and your skills without direction. Curiosity seeks to annihilate itself; there is no curiosity that does not want an answer. The second virtue is relinquishment. The third virtue is lightness. The fourth virtue is evenness. The fifth virtue is argument. The sixth virtue is empiricism. The seventh virtue is simplicity. The eighth virtue is humility. The ninth virtue is perfectionism. The tenth virtue is precision. The eleventh virtue is scholarship. Before these eleven virtues is a virtue which is nameless. Miyamoto Musashi wrote, in The Book of Five Rings: How can you improve your conception of rationality?

Thinking vs. Feeling: The Psychology of Advertising Do ads with facts work better than ads that appeal through emotion and aspiration? Shutterstock Imagine two commercials for a new light beer. The second ad starts in a bar. You can probably guess where I'm going here. So what does science really know about advertising? Here's a good example from Clay Warren, director of the Communications Program at George Washington University. The literature on rational versus affective advertising is very long and mostly inconclusive. If this sounds basically intuitive, then good. The most successful ads -- in the eyes of advertisers at least -- have broad emotional and cognitive appeal. "In 2004, Goody, Silverstein & Partners, developed what would be a "Campaign of the Year" for Hewlett Packard's digital photography," he wrote in an email. So, given that we are capable of both rational and irrational behavior, what's more effective: rational ads or affective ads?

‘Magic Mushrooms’ Cause Positive Personality Change New research from Johns Hopkins School of Medicine indicates that the psychedelic component in magic mushrooms may have lasting medical and spiritual benefits to psychological health. The mushroom-derived hallucinogen, called psilocybin, is known to cause transformative spiritual states, but at high doses it can also bring about “bad trips” marked by terror and panic. The trick is to get the dose just right, which the Johns Hopkins researchers report having accomplished. In their study, the Hopkins scientists were able to reliably induce transcendental experiences in volunteers, which offered long-lasting psychological growth and helped people find peace in their lives — without the negative effects. “The important point here is that we found the sweet spot where we can optimize the positive persistent effects and avoid some of the fear and anxiety that can occur and can be quite disruptive,” says lead author Roland Griffiths, professor of behavioral biology at Hopkins.

Sky ©2017 Google - Terms of Use Image Credit: DSS Consortium, SDSS, NASA/ESA SKY-MAP.ORG DaylightMap Epigenetics One example of an epigenetic change in eukaryotic biology is the process of cellular differentiation. During morphogenesis, totipotent stem cells become the various pluripotent cell lines of the embryo, which in turn become fully differentiated cells. In other words, as a single fertilized egg cell – the zygote – continues to divide, the resulting daughter cells change into all the different cell types in an organism, including neurons, muscle cells, epithelium, endothelium of blood vessels, etc., by activating some genes while inhibiting the expression of others.[5] Historical usage of "epigenetics"[edit] The term "epigenetics" has also been used in developmental psychology to describe psychological development as the result of an ongoing, bi-directional interchange between heredity and the environment.[13] Interactivist ideas of development have been discussed in various forms and under various names throughout the 19th and 20th centuries. Contemporary usage of "epigenetics"[edit]