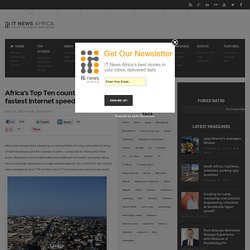 Research done by Net Index has reaffirmed this belief, and while Africa has some pretty impressive average internet speeds, the continent’s top country only managed to rank 77th on their list of 174 countries from around the world. Accra, Ghana Skyline (image source: Wikipedia) “Based on millions of recent test results from Speedtest.net, this index compares and ranks consumer download speeds around the globe. Internet in South Africa. The Internet in South Africa, one of the most technologically resourced countries on the African continent, is expanding. 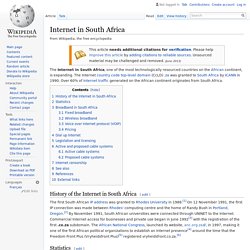 The Internet country code top-level domain (CcLD) .za was granted to South Africa by ICANN in 1990. Over 60% of Internet traffic generated on the African continent originates from South Africa. History of the Internet in South Africa[edit] The first South African IP address was granted to Rhodes University in 1988.[1] On 12 November 1991, the first IP connection was made between Rhodes' computing centre and the home of Randy Bush in Portland, Oregon.[2] By November 1991, South African universities were connected through UNINET to the Internet. Commercial Internet access for businesses and private use began in June 1992[3] with the registration of the first .co.za subdomain. Statistics[edit] Internet users in South Africa showing penetration as a percentage of Internet users in the population. Broadband in South Africa[edit] Fixed broadband[edit] Wireless broadband[edit]

Africa Internet Users, Facebook and 2015 Population Statistics. Internet in Africa. Main article: Digital divide The International Telecommunication Union has held the first Connect the World meeting in Kigali, Rwanda (in October 2007) as a demonstration that the development of telecommunications in Africa is considered a key intermediate objective for the fulfillment of the Millennium Development Goals.[2] Current situation[edit] All measurable parameters about Internet in Africa (ISP subscriptions, host number, network traffic, available bandwidth and bandwidth cost) give an essentially homogeneous picture. 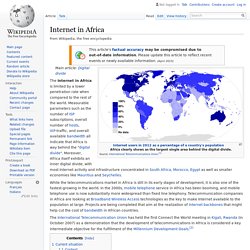 South Africa is the only African country that has figures similar to those of Europe and North America; it is followed by some smaller, highly touristic economies such as Seychelles and Mauritius, and a few North African countries, most notably Morocco and Egypt. Apart from South Africa, the leading Subsaharan country in telecommunication and Internet development is Kenya. Context[edit] Internet access[edit] Number of hosts[edit] IXP traffic[edit] Regulation[edit] List of countries by Internet connection speeds. Mapped: The world according to Internet connection speeds. Ever wondered which countries provide the most rapid Internet experience? 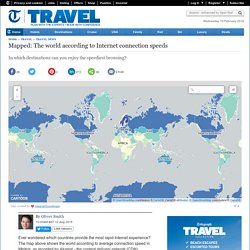 The map above shows the world according to average connection speed in Mbits/s, as recorded by Akamai - the content delivery network (CDN) responsible for serving between 15 and 30 per cent of all web traffic. A couple of places appear surprisingly high up. The Norwegian island pairing of Svalbard and Jan Mayen, for example, has an average connection speed of 36.5Mbits/s - the highest of all.

But it only has one unique IP address, so the result is somewhat skewed. The lofty positions of The Vatican (3rd) and Antarctica (27th) are also due to the low number of readings. South Korea: the world's most connected country Photo: AP/FOTOLIA Akamai's official rankings only take into account countries or regions with a unique IP count of at least 25,000, which gives South Korea the true top spot, followed by Ireland, Hong Kong, Sweden, The Netherlands, Japan and Switzerland.