Binaural beats and brainwave entrainment for the psychedelic mind 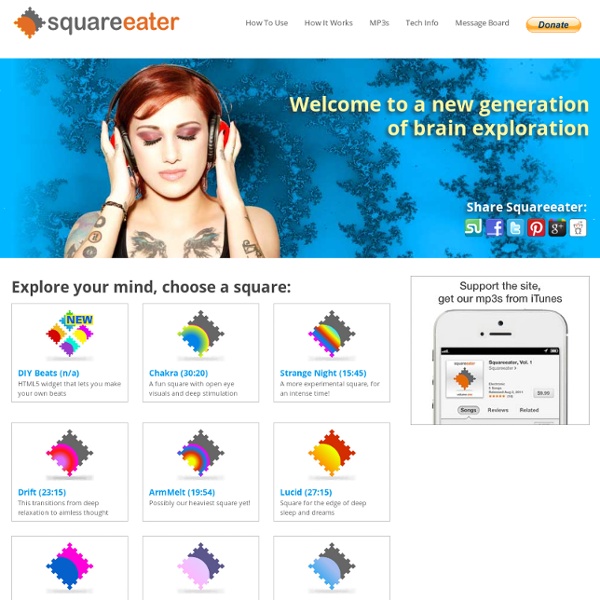 DMT The Spirit Molecule FULL DOCUMENTARY…♥♥♥… WoW… a few years back i was just-an-inch away from getting this… i rather thought i should buy this later.. man only after a few months i realised it has been BANNED world-over…hmm i Missed it !!!…. But since i did tried I-dosage…e-DMT.. i would better avoid it…Not my peace of Cake though…. The Spirit Molecule investigates dimethyltryptamine (DMT), a molecule produced abundantly throughout nature, including humans, and potentially existing in every living organism.

Lucid Dreaming Techniques: A Guide To Lucid Dream Induction Here are my top lucid dreaming techniques for beginners. They range from simple memory exercises (like Reality Checks and Mnemonic Induction of Lucid Dreams) to specialized meditation (like Wake Induced Lucid Dreams). Lucid Dreaming Tutorials For step-by-step tutorials and audio tools for lucid dream induction and exploration, check out my Lucid Dreaming Fast Track study program for beginners and beyond. 52 Ways to Have Lucid Dreams A complete list of 52 ways to have lucid dreams - based on visualization, memory, supplements, sleep cycles and more methods than you can shake a stick at.

Carl Sagan on Alien Abduction Posted 02.27.96 NOVA Carl Sagan was captivated by the notion of life beyond Earth. Yet in this interview, conducted shortly before the well-known champion of science died in 1996, Sagan says that extraterrestrial intelligence is “a wonderful prospect, but requires the most severe and rigorous standards of evidence.” Sagan doubted that the various proponents of so-called “alien abduction” making headlines in the 1990s had met those scientific standards. The imagery from Steven Spielberg’s 1977 film Close Encounters of the Third Kind has continued to influence other visions of alien abduction for decades. 30 Albums That Define Cool Any album “list” is going to be incomplete. It’s going to be filled with albums you agree with, artists you hate and some sort of commentary that you probably disagree with. This list is no different.

Manipulating Marijuana: Monsanto and Syngenta Invest In RNA Interference Technology CANNABIS CULTURE - Having been cultivated and used ceremonially, recreationally and medicinally for thousands of years, cannabis – despite prohibitive laws surrounding the non-medicinal use of the plant – is undoubtedly on the radar of big agribusiness. These companies would certainly turn a profit from developing a patentable transgenic seed for sole distribution if the use of cannabis were to become legal. It would be easy for these companies to create a monopoly over the industry by abusing their ties with federal regulators.

DIY Friendship Bracelet For several months now, we’ve been receiving emails requesting a friendship bracelet DIY. Well, friends, ask and you shall receive! Today, we’ll give you a step by step tutorial on the classic chevron pattern. If you used to whip up friendship bracelets like a champ in grade school and have since forgotten how, consider this a refresher course. And if you can make these with your eyes closed and arms tied . . . umm, can we still be friends? You’ll need:embroidery threada safety pin or tapea pair of scissors

40 Superb Psychology Blogs Forty of the best psychology blogs, chosen to give you a broad sweep of the most interesting content being produced online right now. The list is split into three sections: first are more general psychological blogs, followed by those with an academic slant, followed by condition specific and patient perspective blogs. Other than that the blogs are presented in no particular order. Updated Sep 2012 to reflect blogs that are now inactive. General:

I Like Music cartoon by Stuart McMillen - Recombinant Records This cartoon is dedicated to my number one resource for music discovery: rateyourmusic.com.If you were into this cartoon, the book I quoted from, "Our Band Could Be Your Life" is well worth the price. As are the music, concert tickets and merchandise of all bands in question.Much of this cartoon was drawn in "a world of books, and silent times in thought" - the UQ Social Sciences and Humanities library. Back to post / website. View/add comments for this article.I Like Muisc by Stuart McMillen.

Between Life and Death: How Peyote Saved My Life in Mexico 1st February 2015 By Sergey Baranov Guest Writer for Wake Up World