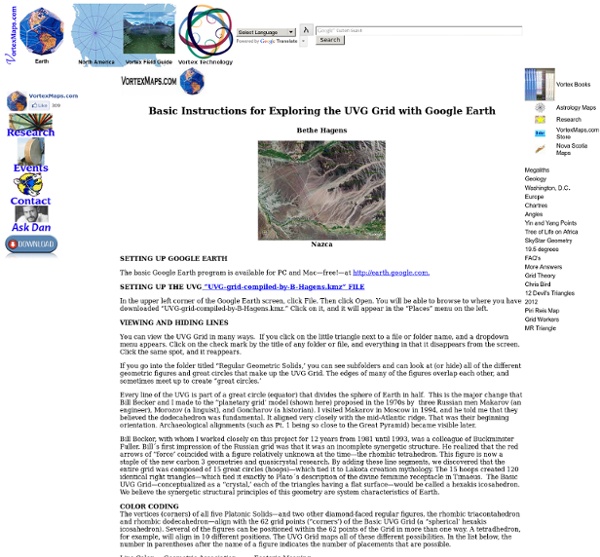 Basic Instructions for Exploring the UVG Grid with Google Earth Bethe Hagens Nazca The basic Google Earth program is available for PC and Mac—free!—at SETTING UP THE UVG “UVG-grid-compiled-by-B-Hagens.kmz” FILE In the upper left corner of the Google Earth screen, click File. You can view the UVG Grid in many ways. If you go into the folder titled “Regular Geometric Solids,’ you can see subfolders and can look at (or hide) all of the different geometric figures and great circles that make up the UVG Grid. Every line of the UVG is part of a great circle (equator) that divides the sphere of Earth in half. Bill Becker, with whom I worked closely on this project for 12 years from 1981 until 1993, was a colleague of Buckminster Fuller. Line Color Geometric Association Esoteric Meaning Red Tetrahedron edges (10) Fire Yellow Cube edges (5) Earth White Octahedron edges (5) White Black Icosahedron edges (1) Water Green Dodecahedron edges (1) Aether bethehagens(at)adelphia.net Related:  Earth Grid/ Ley Lines

Welcome - Learn more about Father Yahweh's Creation (Applied Bio The invention relates to a method, with which it becomes possible to activate inorganic materials in such a manner that with the inset of these materials on the fields of the agriculture and environmental protection favourable effects are obtained. With the inset in the agriculture z becomes. B. the growth of plants and their root formation affects favourably. It is to be dealt now with the state of the art. In the German utility model G 90 00 790,5 U1 with the title ? In accordance with G 94 08 068,2 a pyramid-shaped equipment is entered, in order to be able to receive the cosmic radiation. Further is to the DE 296 04 486 U1 referred. In this connection is to be referred also still to a product information 2001 under the title ? Finally is to be referred still to the DE 44 38 340 A1. In summary can be determined, which was already dedicated to the problem of the use of cosmic radiation energy and the use of the Orgonstrahlung standing thereby in the connection a certain attention. 1. 2.

Axis Mundi From New World Encyclopedia The axis mundi (also cosmic axis, world axis, world pillar and center of the world) is a symbol representing the center of the world where the heaven (sky) connects with the earth. Different cultures represent the axis mundi by varied symbols such as a natural object (a mountain, a tree, a vine, a stalk, a column of smoke or fire) or of a product of human manufacture (a staff, a tower, a ladder, a staircase, a maypole, a cross, a steeple, a rope, a totem pole, a pillar, a spire). Its proximity to heaven may carry implications that are chiefly religious (pagoda, temple mount, church) or secular (obelisk, minaret, lighthouse, rocket, skyscraper).[1] Additionally, the axis mundi may be feminine (an umbilical providing nourishment), masculine (a phallus providing insemination into a uterus), or neither (e.g the omphalos (navel).[2] The axis mundi features prominently in cultures utilizing shamanic practices or those with animist belief systems. Etymology Asia Europe

Atlantis and the Earth grid Chapter 7 Atlantis and the Earth grid The vibrating aether energy that shapes the atom moment by moment also shapes the planets, the stars and all the rest of the universe in the very same way. The Platonic energy fields at the quantum level should therefore also be found at the macroscopic scale of our own planet Earth. The scale of the wavelengths may be different but the ratio of the interfering aether wavelengths are the same, the ratio is inherently fixed by the geometry of the Platonic solids. The Earth grid A number of scientists have been working on the Earth grid model, but the first one was Ivan P. Three Russian scientists, Nikolai Goncharov, Vyacheslav Morozov, and Valery Makarov made the next step in the construction of the Earth grid. Bruce Cathie discovered independently the octahedron and cube in the subtle energy fields of the Earth and this was later given the name the Cathie grid. Becker-Hagens grid (Courtesy of Bethe Hagens, 66.63.115.137/grid) The Earthgate project

Free-Energy Devices, zero-point energy, and water as fuel Constellations: Memory Game:Amazon:Toys & Games Earth Grid Research Version 0.4 :: March 22, 2010 Original :: Jun 2006 UPDATE: Interface fixed. You can now use a convenient web interface to generate Google Earth files that show earth overlaid with one of the five platonic solids (or the Becker-Hagens grid) with all vertices connected by lines. Simply visit the following two links and follow the instructions. Google EarthGrid (Coordinates) Google EarthGrid (Bearing) This does away with having to download and install the Python framework. Summary This is a quick write-up of my ongoing research into the earth grid. Within the spherical center of large masses is a neutral center. Neutral centers can be created electromagnetically via radially converging or diverging electric current pulses, spherical standing waves in piezoelectric materials, or via the radial null vectors of large masses as described above. The earth’s own neutral center is a dimensional window that vibrates at frequencies resonant with the earth’s own spherical harmonics. Platonic Grids 1. 2.

Alex Jones 6. Ancient Astronomy - Mystic Order of Noble Knowledge If it wasn’t for the Ancient Egyptian’s curiosity of our universe, fraternities like the Freemasons wouldn’t be in existence. The Egyptian’s knew the earth revolved around the sun and that the sun appeared to move through the universe. It was this knowledge that enlightened the ancients to count the days of the year and create the zodiac. The Ancient Egyptians began by worshipping the One True God under the symbol of the sun. The sun is the most glorious object in the universe, the source of light and food for all living things. Overtime, the common man begun to worship the One True God less and less and idolized the sun itself. By keeping the knowledge of the inner workings of the universe to themselves, the Egyptian priests were able to control the masses through their mysticism. As the sun passed through each sign of the zodiac, it became, or triumphed over that sign. This practice continued through most of the ancient civilizations. Secrets of the Freemason’s Symbols The Royal Arch

Archaeogeodesy Study Results for Three Major Neolithic Complexes Continuing Entries Datum Updates: March 19, 2006. After determining more accurate coordinates for Avebury, Silbury Hill and Windmill Hill, I determined their site-to-site relationships (updated/reflected in results discussed above). Additionally, the Avebury to Silbury Hill arc equals 0.01307° (0.00100 R27), 1/1000th of lunar orbit per earth rotation. The Windmill Hill to Silbury Hill arc equals 0.02900° or 1/1000 of earth orbit per full moon period (0.00100 S29). These two arc distances and the placement of the three monuments presents precise fractions of astrogeodetic modules based on the three fundamental cosmic motions. GPS Updates: April 24, 2006. The Newgrange coordinate has been updated with a GPS reading for the center of Newgrange Mound. Research Update: Sept. 9, 2006. Once in a while I get a whim and follow it. Hovering in cyberspace above Mont Blanc, another whim came to mind. Next whim, check the illumination angles. It goes like this, right? Research Update: Jan. 22, 2007.

AboveTopSecret.com: Conspiracy Theories, UFOs, Politics, and Man Weightless Flames: How Fires Burn in Space | Fire in Zero-G SAN DIEGO — How do you put out a fire on a space station? If you were to ask an Earthbound firefighter how to extinguish a fire, he might tell you to aim for the base of the flame. But what if there is no base? These and other questions are being probed by a group of undergraduate students here at the microgravity lab at the University of California, San Diego’s School of Engineering, where scientists want to understand the nature of fire, sans gravity. Led by engineering undergraduate Sam Avery, the student project manager for the experiment, the work seeks to better define how combustible fluids burn in space, particularly biofuels. "I went to a professor who I thought had some interesting research in microgravity combustion, and I asked if I could build on his research to enter the NASA Microgravity University Program," Avery said recently at his lab. A computer rendering of the UCSD microgravity fire experiment, after deposition of the fuel droplet.Credit: Sam Avery