How to make a tool set 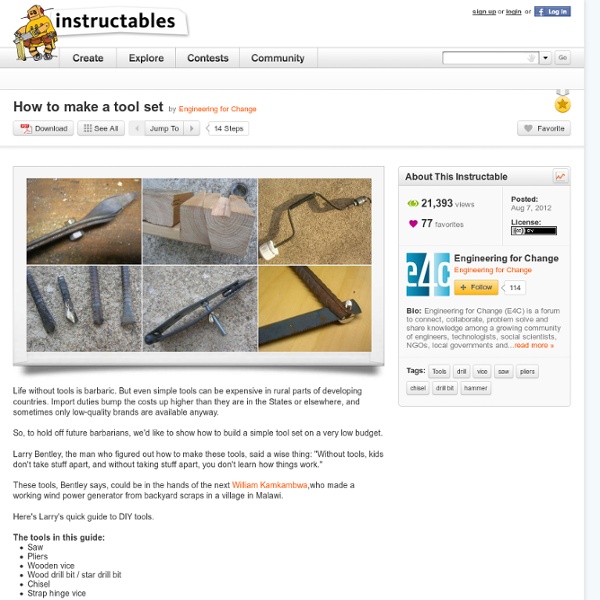 Life without tools is barbaric. But even simple tools can be expensive in rural parts of developing countries. Import duties bump the costs up higher than they are in the States or elsewhere, and sometimes only low-quality brands are available anyway. So, to hold off future barbarians, we'd like to show how to build a simple tool set on a very low budget. Larry Bentley, the man who figured out how to make these tools, said a wise thing: "Without tools, kids don't take stuff apart, and without taking stuff apart, you don't learn how things work." These tools, Bentley says, could be in the hands of the next William Kamkambwa,who made a working wind power generator from backyard scraps in a village in Malawi. Here's Larry's quick guide to DIY tools. The tools in this guide: Saw Pliers Wooden vice Wood drill bit / star drill bit Chisel Strap hinge vice

Survival Gardening Survival gardening can provide fresh food for you and your family in the aftermath of a disaster. Disasters can occur at anytime and anywhere, and take many forms. Not all disasters are dramatic and natural. There are many types of garden seeds available. No-Till Garden Method Most garden plots are tilled. Plant in Buckets Above ground vegetables like tomatoes require loose soil that is about 10 inches deep. Plant in Tires Root crops provide valuable nutrients but require 12 to 14 inches of loose soil in which to grow. Grow Up Vegetables that grow on a vine like cucumbers and squash only need a small spot of broken dirt. Beans Beans are easy to grow. With a little ingenuity and having heirloom seeds on hand will allow you to provide fresh, healthy food after a disaster.

Survival Food Series: 25 Survival Seeds You Need For Your Garden Living off the land sounds as inviting as Christmas dinner. But many have hardly had adequate experience being “farmers.” In fact, many have had no experience at all when it comes to planting anything. That being said, the day is slowly approaching where each of us may have to trade in our company identification badges for a shovel and a pair of overalls. Educating yourself on farming topics such as mirco farming, planting for the seasons, natural insect repellents, seed collection and seed storage could help prepare for an upcoming economic crisis. Learn about how many vegetables or fruits the plant will yield. Start Practicing The only way to be fully prepared as far as growing plants is concerned is to practice, practice, practice. With each gardening experience will come more wisdom on how to handle a larger garden. Survival Seeds These seeds that were chosen were based upon their yield quantities, *ease in growing, nutritional content and for the season they are planted in. Sources:

The Urban Farming Guys 9 Steps To Starting A Survival Garden In a time of economic uncertainty and rising food prices, it it always a good idea to have a garden to provide extra food for you and your family. Besides providing a source of food in an emergency, a garden is also a great source of wonderful vegetables which are MUCH healthier to eat than most of the food you can get at the supermarket. So how do you begin? #1) Decide What Your Goals Are - Do you want to grow enough just to add a few vegetables to your dinner once in a while? Some people who want to live "off the grid" end up building a garden large enough that it will provide almost all of the food that their family needs. #2) Evaluate Your Land - Once you know what your goals are, you need to evaluate the land that you are currently living on. If you decide that you want a "mega-garden" but you live in a condo, then you may have to end up moving to achieve your goals. #4) Improve The Soil - It is almost a certainty that you soil will need a boost. So what is the solution? Comments

Top 10 DIY Tech Gifts @keyboard-vomit: Yeah, but wouldn't it be awesome if some of our not so tech friends actually attempted (and accomplished) one or more of these feats? I mean, when "it's the thought that counts," shouldn't it be a thought about something we'd actually appreciate. Then again, maybe socks are your thing. ;) @HunterShoptaw: That they are, I'm wanting some socks with an integrated HDD, and some USB connectivity. @HunterShoptaw: The thought does count, but it sure would be nice if they enjoyed the gift too. So for this year, I created wishgenies dot com for people who WANT to give good gifts, but don't know what they'll want. @keyboard-vomit: I swear that some day, some how...Google will be able to find my lost socks.

Survival Food Preparation and Food Storage List Don’t Forget The Kettles! When thinking ahead of survival food preparation, make sure you have several big kettles and 55 gallon water barrels on hand. Remember, you will likely be heating your own water for everything from cooking and canning to bathing and laundry. When you are looking at all the water heating, water CARRYING and cooking that you will be doing, not to mention possibly making soap, cooking huge pots of stew for your neighbors that weren’t as wise as you were, and canning your own veggies, you can never have too many kettles and 5 gallon buckets! Same way with knives, canning jars and utensils. There are several ways to prepare foods in emergencies, when there is no power for the stove or when you are stuck with NO STOVE to cook on. Build a Fire … and cook over a fire outdoors.Use a flat top wood stove… this actually works quite well indoors or out. Course if you have freeze dried foods, some of those are made to eat without heating them. Storing Home Canned Foods Tip:

Survival Food 101: Hardtack - Survival Life Pilot bread, ship’s biscuit, shipbiscuit, sea biscuit, sea bread , “dog biscuits”, “tooth dullers”, “sheet iron”, “worm castles” or “molar breakers”. Hardtack has had many different names throughout the years but its importance has never changed. Hardtack has actually been around since the time of Egyptian Pharaohs, but if you have heard of it, you probably know it better from the Civil War period. During the war, squares of hardtack were shipped to both the Union and Confederate armies, making a staple part of a soldier’s rations. Typically made 6 months beforehand, it was as hard as a rock when it actually got to the troops. To soften it, they usually soaked it in water or coffee. Soldiers and sailors the world over have used hardtack as a way to stave off hunger. It is such a basic item that I am amazed that no one I know under the age of 50 understands its importance, let alone how to make it. This is one of the most cost effective long term survival foods that you can make.

34 DIY headboard ideas The headboard is now looked at as a mainly decorative element in our bedrooms. As it usually happens, it all started from a practical reason/purpose.The headboard, a piece of furniture that is attached to the head of the bed, was initially an element that isolated sleepers from drafts and cold. Back then the buildings were less insulated and thus such a feature was needed. The headboards were made of wood because it’s a material that’s less conductive than stone or brick for example. With time, this function has been lost and replaced by a purely aesthetical function. Headboards are mostly decorative now, although they do have a certain amount of functionality. These 34 diy headboard ideas exposed here are not competing with each other, by the contrary these are the best projects we could find to show you, and all of them are equally interesting. Headboard from salvaged materials. The first project is realized from scrap materials salvaged from a burn pile. Metal headboard. Wood headboard.

Our Simple DIY Home Solar Power System Bringing some of the benefits of electrical power to our off-grid home has been a hit-or-miss affair. Over the years we’ve tried some very simple approaches to lighting and small battery recharging for our flashlights, such as hauling a 12 volt car battery to a small rural school about a half mile away every time it needed to be topped up. This was time consuming and inefficient. But we didn’t want to lose the feel of our simple home by bringing in a large generator and the jugs of gas needed to run it, and the prospect of setting up a wind turbine or solar array seemed expensive and a technological eyesore in a natural setting. …developing Eartheasy.com using a dialup internet connection on a phone line strung through the woods was challenging… Today, with the help of a local expert on off grid home solar power and alternative energy systems, we have the best of both worlds. The cost of this complete solar system, in today’s pricing for the components, was less than $1000. 1. 2. 3. 4.

DIY fire making How I built an electricity producing Solar Panel Several years ago I bought some remote property in Arizona. I am an astronomer and wanted a place to practice my hobby far away from the sky-wrecking light pollution found near cities of any real size. In my attempt to escape city slicker yuppies (you know the kind, the ones that like to blab loudly on their cell phone while they work on some business administration degree in a cyber cafe somewhere in Trendyland.) and their light pollution, I found a great piece of remote property. The problem is, it's so remote that there is no electric service available. I built a wind turbine to provide some power on the remote property. Here is a video of the solar panel set up and in use on my remote, off-grid property. Let me state up front that I probably won't be able to help you out much if you decide to build your own solar panel(s). So what is a solar panel anyway? I started out the way I start every project, by Googling for information on home-built solar panels. seller. Oops!