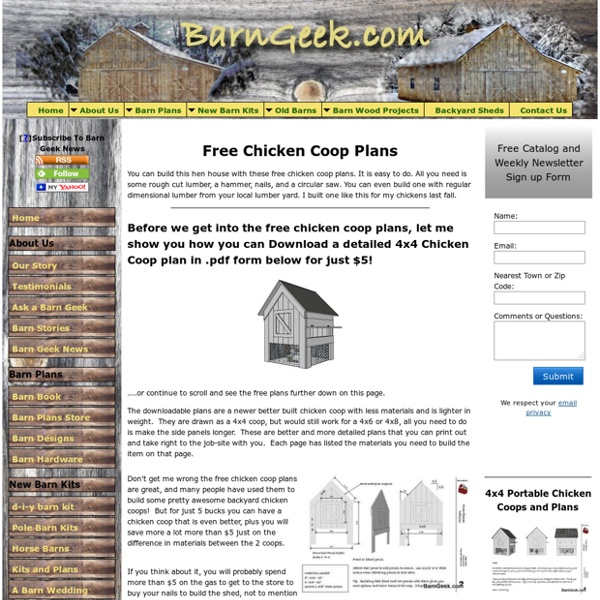 You can build this hen house with these free chicken coop plans. It is easy to do. All you need is some rough cut lumber, a hammer, nails, and a circular saw. You can even build one with regular dimensional lumber from your local lumber yard. I built one like this for my chickens last fall. Before we get into the free chicken coop plans, let me show you how you can Download a detailed 4x4 Chicken Coop plan in .pdf form below for just $5! ....or continue to scroll and see the free plans further down on this page. The downloadable plans are a newer better built chicken coop with less materials and is lighter in weight. Now let's continue with those Free Chicken Coop Plans... I have found that with this free chicken coop plans design it is easy to gather the eggs, feed, and water my chickens. To see any of the illustrations on this page in larger more detailed use this gallery and expand it to full screen. Posts and Joists Space your landscape blocks 4' apart at two 6' intervals. Floor Rafters

6 considerations for building chicken coop nesting boxes One of the nature’s most prime and useful product can be availed from the use of the nesting boxes. When it comes to the process of raising backyard chicken, numerous dimensions and factors might demand your utmost attention. The eggs that are bought from the stores are quite different from the ones you obtain from the home based settings. 10 Most Creative and Inovative Chicken Coop Designs When thinking about verandah farming, a number of pointers need to be considered important. One of them is the chicken coop designs. Chicken coops are basically referred as the place where the chicken live and the egg laying, breeding and egg hatching processes take place. These places should be made comfortable and the optimum temperature needs to be maintained in the coops because the comfortable and well planned designs might help get best out of the chicken. In context of such pointers, we are here to tell our web users; the most creative free backyard chicken coop designs for the chicken.

10 inspiring urban chicken coop designs for Happy Hens Many people are growing tired of the mad rush of city life, and are moving to smaller towns, and by employing different methods and devices, they are figuring out different ways to raise their own food like fruit and vegetables as well as chickens and eggs. With raising backyard chickens , they are hoping to fare better from not having to depend entirely on other people for all the necessities of life and to this end they are able to download free chicken coop plans from the Internet to suit their specific needs. Of course there are many people who just love the idea of keeping chickens as pets. Building your own coop needn’t be difficult, because apart from books and pamphlets, the Internet can offer 10 inspiring urban chicken coop ideas on raising backyard chickens in attractive coops and how it can be really economical to build. 1-Clucking Cool coop 2-The Mitchell Snyder's coop

Automatic Chicken Coop Door : Nifty-Stuff.com Rest In Peace Grey Chicken I’ve been wanting to design an automatic chicken coop door closer for years. There are plenty of other systems out there that automatically open and close the coop door, but they are expensive and, well, not designed by me! Basically my idea is to create a simple system that is a “safety net” in case we don’t remember to lock our girls in at night. I have no problems letting the girls out in the morning, but I want to ensure they are closed up safe in the evening. I learned my lesson the hard way one night when I got home late from a party and a coon had killed my favorite hen.

Bedding Material choices for Chickens Raising chickens is just like raising the little babies – they require extra attention, affection and care, indeed. When you see your baby chickens and the adult ones roaming here and there in the backyard, a strike of happiness comes out of the heart. My father was right; raising chickens is an interesting yet addictive hobby. My experience of raising chickens is not really vast, but within a short time span I have done a lot for my little babies. I loved the coop building part and yes, decorating it even was an interesting end. Similarly, setting up the food containers and building territories was even something I enjoyed a lot.

Factors affecting feed intake of chickens There are many factors which affect feed intake of chickens and hence determine nutrient intake level and efficiency of poultry production. Although the spectrum of these factors is very broad, here the focus will be made on management and environment, feed and water, and physical factors. Management and environment play an important role in controlling feed intake and efficiency. Poultry producers should, therefore, make use of the current technology and recent research works aiming at optimising management practices and micro-environment for better feed intake and utilisation.

The Chunnel: The Chicken Tunnel This side of the yard gives them lovely shade in the heat of the afternoon. I have to say, living in the suburbs I have to protect them from lots of critters…we have foxes and birds of prey everywhere. This is as close to free range as we can get for them and they don’t need supervision. Auto Coop Door Prototype : Nifty-Stuff.com Rest In Peace Ming-Ming Duck After years of thinking about this, and after 2 separate raccoon attacks I finally found some time to create a prototype / proof of concept of my auto chicken coop door closer. You can read the details of the initial design here: The most recent coon attack was 3 weeks ago when a gang of 4 coons came into the coop just an hour after sunset. They were able to kill a hen and our only duck before I got out there to scare them away. It is a terrible feeling knowing that if you had only gone out a few moments earlier that everybody would be fine.

Chris and Keri’s Blog » Automatic Chicken Door Introduction My wife and I started raising chickens this year. A few days after we moved them out to the coop, the novelty of going out in the morning to let them out and in the evening to lock them up began to wear off. We needed an automatic door opener! Being an engineer, and a cheapskate, I decided to build one myself rather than shell out over $200 for a commercial one (of questionable quality). A unique blend of art and science that reveals the hidden machinations of the natural world One set of threads after incubation. Here the threads have been inoculated seperately with two different bacteria that are initially white. However, when these two strains are allowed to mix with each other and communicate, they produce a purple pigment.This is clearly visible at the junction or node where the two species have mixed and are communicating with one another

Automatic chicken door version two. As it is getting cold again and my chickens made it through the summer just fine, it is time to revisit and revitalize my automatic chicken door. The older model was a large door that slid on a track that would get leaves, snow, and ice messing the whole thing up. Also the mecanisim that opened the door was a string that tension was held on with springs, the string would knot up and stop working, blowing the fuse sometimes. There is an older version of this project and you can read about it here. Chicken door version 1 DIY solar powered automatic chicken coop door opener Christian Wolpert's automatic chicken coop door opener and closer is the second one I've seen so far that is completely off the grid and designed to work on a battery that gets charged with a solar panel. It uses an MSP430 microcontroller as the brain along with a customized Linux source code that Christian is kindly offering as a free download. I know building and programming your own microcontroller can sound advanced, but Christian describes a clever short cut where he makes use of a tutorial as his starting point. This trick reduces most of the number crunching work to a process of adjusting specific interrupt routines to fit your automatic coop opening needs. Edited to add: After years of research, Mark eventually settled on this automatic chicken door.

Chicken Coop Door open/close I keep forgetting to close the coop door so I automated the door with an Arduino, a linear actuator from Firgelli Automations, four solid state relays from Fotek (in hindsight this is super over designed), and a real time clock from Sparkfun (uses i2c). Below is the code. It takes into account the day of the year and adjusts sunrise and sunset. The door opens one hour after sunrise and closes one hour after sunset.