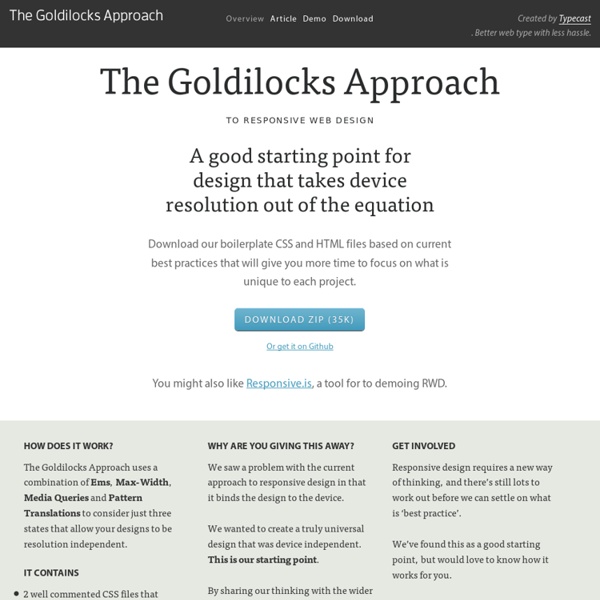 csswizardry/inuit.css Columnal | A responsive CSS grid system helping desktop and mobile browsers play nicely together. Skeleton: Beautiful Boilerplate for Responsive, Mobile-Friendly Development Frameless CSSHórus | CSS Library for responsive and mobile websites Less Framework 4 I called Less Framework "a CSS grid system for designing adaptive websites". It was basically a fixed-width grid that adapted to a couple of then popular screen widths by shedding some of its columns. It also had matching typographic presets to go with it, built with a modular scale based on the golden ratio. Contrary to how most CSS frameworks work, Less Framework simply provided a set of code comments and visual templates, instead of having predefined classes to control the layout with. /* Default Layout: 992px. Less Framework was popular in the early days of responsive design. Eventually, I moved on from fixed-width grid systems and worked on a fully fluid-width one, in the form of Golden Grid System. Less Framework's popularity was helped by the following contributions and the lovely people behind them (dead links crossed off):

Initializr - Start an HTML5 Boilerplate project in 15 seconds! Fluid Baseline Grid - A sensible HTML5 and CSS3 development kit rwdgrid.com / Responsive Grid System for your next Project Open DAWS v4.0.1 theory For a long time, we've built sites that specified column widths in HTML. This leads to a compromised design, with an app or site that looks good on a single large resolution, and reasonable on mobile. This isn't good enough. The Open Digital Application Wireframing Styleset (or OpenDAWS) is an attempt to correct this. what OpenDAWS is... OpenDAWS can be thought of as an structured library; that is to say, it's a huge set of resets and helpful classes, as well as the logic for grid layouts, but without any of the constraints of a full framework. This means that you can create a design limited in width only by the user's viewport size. Moreover, by not specifying widths in HTML, we're free to completely change how our design looks at these sizes. ...& what it isn't This is not a full framework, in the vein of Foundation, Bootstrap or Skeleton. It's also not an attempt to style everything. Finally, it's not backwards incompatible. basic usage html <header>... mobile css making it responsive