Ten games that make you think about life 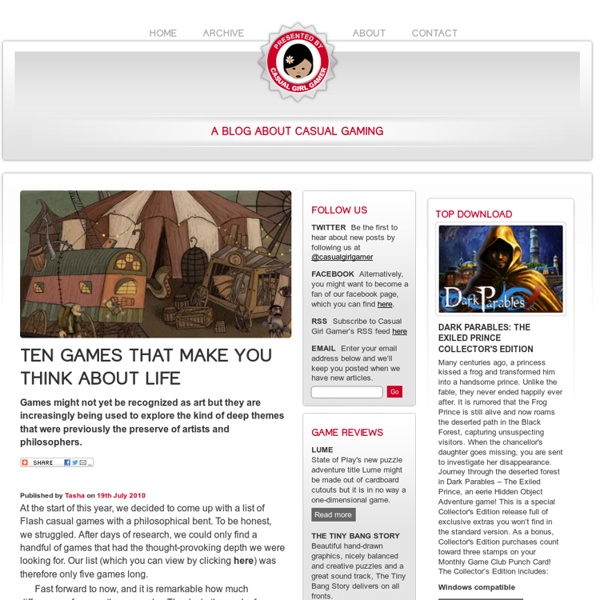 At the start of this year, we decided to come up with a list of Flash casual games with a philosophical bent. To be honest, we struggled. After days of research, we could only find a handful of games that had the thought-provoking depth we were looking for. Our list (which you can view by clicking here) was therefore only five games long. Fast forward to now, and it is remarkable how much difference a few months can make. Thanks to the work of pioneers like Daniel Benmergui, Gregory Weir and PixelAnte, there is now an abundance of clever arty Flash games to pique our intellects, and as a result creating this follow-up list of games that make you think has been a doddle. In a wonderful twist, it seems it is the Flash gaming space - until now known more for the throwaway nature of its games rather than depth - that is leading the way in this exciting new area of gaming, as we hope the following games prove. 1Immortall The game starts with you crash landing on a planet. 2Loved 5Coma 6Loondon

Thinking Machine 4 Thinking Machine 4 explores the invisible, elusive nature of thought. Play chess against a transparent intelligence, its evolving thought process visible on the board before you. The artwork is an artificial intelligence program, ready to play chess with the viewer. If the viewer confronts the program, the computer's thought process is sketched on screen as it plays. A map is created from the traces of literally thousands of possible futures as the program tries to decide its best move. Those traces become a key to the invisible lines of force in the game as well as a window into the spirit of a thinking machine. All Too Flat : Pranks : Cube One of the most prominent landmarks in the East Village in Manhattan is a statue of a giant steel cube. The cube was built at Astor Place in 1968, and has stood there ever since. The cube can spin on its axis, which is pretty entertaining the first time, and requires a few people to get it moving. Typically surrounding the cube is an endless supply of skateboarders and Goth kids, as the cube has become a central hangout for many East Village kids and runoff from St. Marks Place.

Game of Life The Game The Game of Life is not your typical computer game. It is a 'cellular automaton', and was invented by Cambridge mathematician John Conway. This game became widely known when it was mentioned in an article published by Scientific American in 1970. It consists of a collection of cells which, based on a few mathematical rules, can live, die or multiply. 10 Life-Enhancing Things You Can Do in Ten Minutes or Less By Barton Goldsmith, Ph.D. It usually takes us much longer to change our moods than we’d like it to take. Here are ten things you can do in ten minutes or less that will have a positive emotional effect on you and those you love. 1. Watch "The Last Lecture" by Randy Paus ch .

Reddit Reddit /ˈrɛdɪt/,[6] stylized as reddit,[7] is an entertainment, social networking, and news website where registered community members can submit content, such as text posts or direct links. Registered users can then vote submissions "up" or "down" to organize the posts and determine their position on the site's pages. Content entries are organized by areas of interest called "subreddits." 19 Amazing Video Game Cakes - Mental Floss Serious gamers know just how time-consuming gaming is, often making it difficult to do anything besides working (only to buy more games) and playing the games themselves. Even so, gamers usually do still manage to have lives outside of the console; these cakes are some of the amazing creations born as a result. Consoles

Thrill On Ghost car - russian dash cam mystery Jackie Robinson Steals Home in 1955 World Series - SC Flashback Unbelievable Frog Blowups! Topwater Bass Fishing with a Spro Popping Frog. Women gamers have more sex than non-gamer females, study finds - Tech Talk -... (CBS/CNET) - What you're about to read might surprise you. According to a study performed by Harris Interactive at the behest of game website Gamehouse, more than half of online gamers are female. But that's not the real shocker in the results of the analysis of more than 2,000 adults: women gamers have more sex than women non-gamers. The Ultimate Steak Manual - Food The steak is the connoisseur’s meat dish; a subject of debate, delight and potential disappointment. To encourage the first two and avoid the last, we’ve consulted three prime-cut experts and one wine expert to produce a definitive instruction manual so that you, the antlerless man, can prevail in the battle of the beef. Rib-eye The rib-eye is the rising star of the steak world. As people have become more steak-conscious, this fatty, flavoursome cut has shot up the popularity charts. “Our customers’ favourite cut,” says Richard Turner, head chef at London’s famous Hawksmoor steak restaurant.