Avoiding Tangents: 9 Visual Blunders Every Artist Should Watch Out For 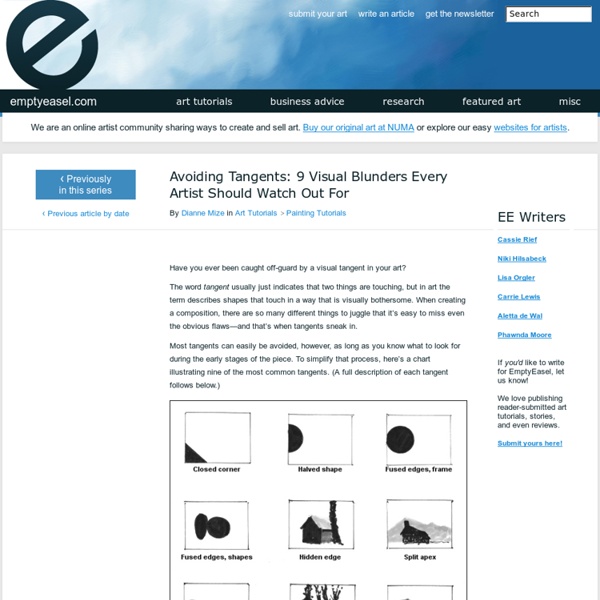 Have you ever been caught off-guard by a visual tangent in your art? The word tangent usually just indicates that two things are touching, but in art the term describes shapes that touch in a way that is visually bothersome. When creating a composition, there are so many different things to juggle that it’s easy to miss even the obvious flaws—and that’s when tangents sneak in. Most tangents can easily be avoided, however, as long as you know what to look for during the early stages of the piece. 1. When a shape completely covers any corner of the artwork, it visually isolates that corner from the rest of the painting. Solution: Find another way to crop the image or soften the edge of the object so that the tangent is not so distracting. 2. When a symmetrical shape is cut in half by the edge of the painting it creates an uncomfortable, chopped-off feeling for the viewer. Solution: Bring the entire shape inside the picture plane or crop the image somewhere other than the halfway point. 3. 4.

PSG Art tutorial Foreword I believe there is logic behind why a picture works or not. I also believe that humans are meat machines, and that one day computers will be able to emulate humans and what we do. Since logic can be formulated into rules, guidelines and theories, these can be shared. I will attempt to do so here. Note that I have just empirically deduced the theories I present here, and that I'm a highly fallible meat machine. Many rules also play against each other and may cancel each other out, or become invalidated because of a stylistic approach . The far most useful critique I can give developing artist is: Practice. Updates 2012 May02: Clarified stuff in the Terminology section. Table of contents Licence This tutorial is, in its current form, free to translate and 'mirror' in that form. Because I may be updating it and new versions are generally better, I'd rather not have it mirrored too much. I guess this licence comes pretty close: Terminology (Upd. 2012) Seeing (Upd. 2012) Light stuff Exposure

CG Education Primary, Secondary, and Tertiary ShapesBy Neil BlevinsCreated On: Sept 28th 2006Updated On: Nov 30th 2013 Go here to read this tutorial in Indonesian. This theory in composition comes in many names. Primary, Secondary, and Tertiary Shapes Big, Medium, Small 1st Read, 2nd Read, 3rd Read (as in, the 3rd time I read (looked at) this image I saw these shapes) Whatever the name, the idea is the same, if your image has a nice distribution of big (primary), medium (secondary) and small (tertiary) shapes, the resulting image will tend to be more pleasing to the eye. First, a definition. Secondary shapes are the smaller shapes that either sit ontop of, or help make up the primary shapes. Tertiary shapes are again smaller than the secondary shapes. Here's three 2D diagrams showing primary, secondary and tertiary shapes in a fake composition. First off, what should the size of these details be? So these could be primary, secondary and tertiary shapes.... But so can these... And these... Looking better.

The 10 laws of Photoshop etiquette | Photoshop Designers, freelancers, lend me your ears. Whether you work as the former or the latter, at some point in your career you will have a job where end goal is to to pass your Photoshop files onto someone else. Many of us have been on the receiving end of that relationship. And there's come a time when we've opened up that PSD file and thought "What the hell?". I've personally experienced an instance in which a creative agency's contract for a particularly large design job was terminated due to the fact that they had supplied messy PSD files that no one could make head or tail of. Want to avoid damaging client relationships and getting yourself a bad rep within the design community? 01. As boring and mundane as it sounds: name your layers. Once labelled, organise these layers into group folders; allowing you to move and show/hide various large sections with ease. 02. Establish a simple naming convention that not only works for you, but would also work if your granny had to read it. 03. 04.

CAE'S COLOUR TUTORIAL - everything is going to be daijobu Thumb War - Design Iteration Combat Simulation THUMB WAR : Design Iteration Combat Simulation by Paul Richards Updated 07/04/09 Ten-hut, fellow concept grunts! The following text is a condensed adaptation of some recent workshops I've spoken at on the theory/practice of thumbnailing, and is not a verbatim transcript. Oorah! If you've ever been in the military, you know advertisements only show half the picture. It's the glamorous half, the one depicting acts of extreme heroism, glossing over much of the arduous and mundane aspects of military life. In the military, you serve your country. War is hell, and so, in its own way, is design. In a perfect world, there would be no war. But this isn't a perfect world. Our abilities give us some control over the outcome, but like generals in their tents on the mountain, the client is calling the shots. We win wars by coming face to face with our enemies. Internal Uncertainty // The artist's lament of "I don't know where to begin!" External This is akin to marksmanship. Layout // Use the page!

HOW TO: Market yourself as a designer In order to attract great clients and interesting projects, grow your business or land that job you’ve always dreamed of, you need to show the world your value and make yourself stand out from the crowd. The design arena is a very competitive field, so chances are you should be spending some time and effort on making yourself noticed and putting your name out there. Or, in other words, you need to start thinking about marketing yourself as a designer! If you have no idea where to begin, here’s 5 simple steps you can try right now. 1. In order to market yourself, you first need to define yourself and your brand. A great place to start is to create a nice personal website. Look at the personal websites of other designers for some inspiration and create something that neatly expresses who you are and what you are passionate about. 2. In order to market yourself, you need to put yourself out there. You don’t have any projects to show off yet? 3. 4. How can you do this? 5. Not enough?

A Singular Creation Art Community • Tutorial: Painting Realistic Eyes We would like to ing you this feature tutorial by Linda Bergkvist, renowned in the digital arts community for her gorgeous portrayal of characters. In this tutorial, Linda shows us step by step how she paints realistic eyes. About Linda Bergkvist Linda Bergkvist is a renowned digital artist who currently lives in Sweden. Linda Bergkvist's website can be found at www.furiae.com.

Gestalt GESTALT The study of gestalt originated in Germany in the 1920s. It is a form of psychology that is interested in higher order cognitive processes relative to behaviorism. The aspects of gestalt theory that interests designers are related to gestalt's investigations of visual perception, principally the relationship between the parts and the whole of visual experience. The visual world is so complex that the mind has developed strategies for coping with the confusion. Most of what you will study about gestalt is concerned with how these groups are formed and what effect they have on perception. The same concepts that form groups can be reversed to ungroup items -- to make them look unique and stand alone. The trick is to strike a balance between unity and variety.

35 Inspiring Color Palettes from Master Painters | Art Varsity Putting together a great color palette for your design work can be one of the most challenging aspects of any project. And many times, color palettes are built from some source of inspiration. So why not be inspired by some of history’s greatest master artists? Colour Lovers has a lot of great tools including the ability to create color palettes auto-magically from pics you find around the web. Of course, computer algorithms are not perfect; they miss key accent colors frequently and make questionable decisions on extracting the dominant tones. Long story short … here are 35 color pallets extracted from the work of some amazing painters with relative ease thanks to the Colour Lovers tools: William Blake Ancient of Days William Adolphe Bouguereau Birth of Venus Nymphs and Satyr Young Girl Defending Herself Against Eros Alexandre Cabanel Cleopatra Paul Cezanne The Basket of Apples La Montagne Saint Victoire Barnes Leonardo Da Vinci The Mona Lisa St. Vitruvian Man Edward Degas Ballet Rehearsal Paul Gauguin

The Aesthetics of Symmetry Before we ponder some examples and contemplate the value of their Interest level, allow me to digress to discuss the M value for the complexity of the motif. I propose a simple measure of complexity for the motif: count the number of distinct elements. Here are some sample motifs, with the corresponding count of their "M": Note that the concept of a "distinct element" is a bit subjective: it depends on what you perceive as an element. A motif can have its own symmetry beyond that of the overall design. In the case such as above where the Motif show signs of symmetry, the Interest level equation should properly be I = M/ysn, where "y", the additional divisor, represents the factor for the type of symmetry operation within the motif itself.