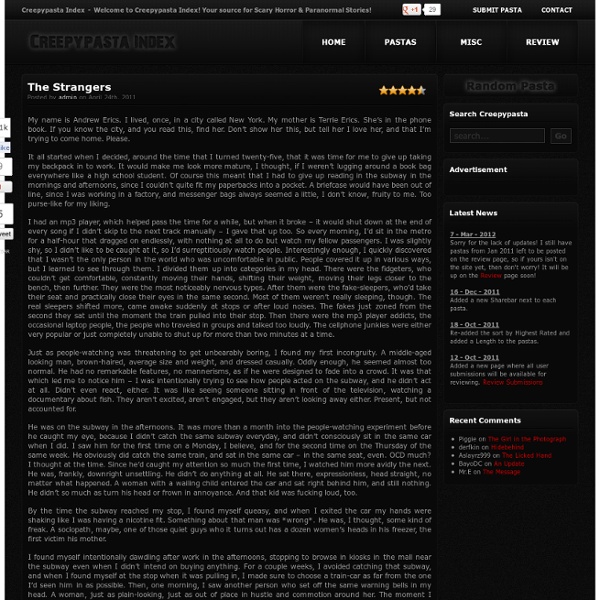 My name is Andrew Erics. I lived, once, in a city called New York. My mother is Terrie Erics. She’s in the phone book. It all started when I decided, around the time that I turned twenty-five, that it was time for me to give up taking my backpack in to work. I had an mp3 player, which helped pass the time for a while, but when it broke – it would shut down at the end of every song if I didn’t skip to the next track manually – I gave that up too. Just as people-watching was threatening to get unbearably boring, I found my first incongruity. He was on the subway in the afternoons. By the time the subway reached my stop, I found myself queasy, and when I exited the car my hands were shaking like I was having a nicotine fit. I found myself intentionally dawdling after work in the afternoons, stopping to browse in kiosks in the mall near the subway even when I didn’t intend on buying anything. They didn’t, though, not in any way that I could tell. He hadn’t gone anywhere! He ignored me.

15 Bogeymen From Around The World Creepy The bogeyman is a legendary ghost-like monster. The bogeyman has no specific appearance and conceptions of the monster can vary drastically even from household to household within the same community; in many cases he simply has no set appearance in the mind of a child, but is just an amorphous embodiment of terror. This list looks at 15 bogeymen from around the world. The Namahage visits each house on New Year’s to ask if any misbehaving children live there. The Korean bogeyman is called Kotgahm, which is the word for persimmon. Duérmete, niño, duérmete ya. If you think of a coconut as a head, with the three holes the features of a face, you can see how El Coco might be transformed in the mind of a child to a hairy little man. One of the most unusual of the world’s bogeys is Groke, a giant blue blob who is so lonely and sad that the ground beneath her feet freezes as she walks. There are many theories about the origin of the word “bogeyman.” Czech Republic and Poland Jamie Frater

Creepypasta Index | Scary Horror & Paranormal Stories The Dictionary of Obscure Sorrows Death By Utopia John B. Calhoun relaxing in Universe 25 In the late 20th Century, John B. Calhoun decided to make Utopia; it started with rats. In 1947 he began to watch a colony of Norway rats, over 28 months he noticed something, in that time the population could have increased to 50,000 rats, but instead it never rose above 200. Then he noticed that the colony split into smaller groups of 12 at most. He bought the second floor of a barn, and there he made his office and lab. 2.7 metres square with 1.4m high walls. Society broke. The outside of Universe 25 The purpose of the experiment for Calhoun was to examine a pressing problem, overpopulation. After day 600, the male mice just stopped defending their territory, listless mice congregated in the centres of the Universe. The ‘beautiful ones’ withdrew themselves ever so quietly, removing themselves from the sick society. In the end the population sank, even when it was back down to a tolerable level none of the mice changed back. Further Reading

Why Suicide Has Become an Epidemic--and What We Can Do to Help WHEN THOMAS Joiner was 25 years old, his father—whose name was also Thomas Joiner and who could do anything—disappeared from the family’s home. At the time, Joiner was a graduate student at the University of Texas, studying clinical psychology. His focus was depression, and it was obvious to him that his father was depressed. Joiner knew enough not to worry. What makes some people, such as Vincent van Gogh, desire death in the first place? Try Newsweek for only $1.25 per week But Dad had left an unmade bed in a spare room, and an empty spot where his van usually went. The investigators found slash marks on his father’s wrists and a note on a yellow sticky pad by the driver’s seat. Back home for the funeral, Joiner’s pain and confusion were compounded by ancient taboos. Survivors of a suicide are haunted by the same whys and hows, the what-ifs that can never be answered. Joiner is 47 now, and a chaired professor at Florida State University, in Tallahassee. Singer Mindy McCready (d.