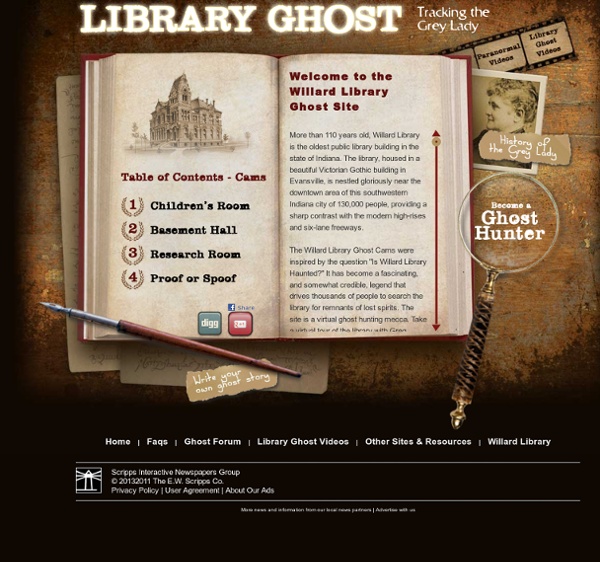 More than 110 years old, Willard Library is the oldest public library building in the state of Indiana. The library, housed in a beautiful Victorian Gothic building in Evansville, is nestled gloriously near the downtown area of this southwestern Indiana city of 130,000 people, providing a sharp contrast with the modern high-rises and six-lane freeways. The Willard Library Ghost Cams were inspired by the question "Is Willard Library Haunted?" It has become a fascinating, and somewhat credible, legend that drives thousands of people to search the library for remnants of lost spirits. The site is a virtual ghost hunting mecca. Take a virtual tour of the library with Greg Hager, Willard Library Director, and see if you can locate the cams hidden in the building.

10 Kick-Ass Secret Passage Bookshelves If there’s one dream that unites all bookish folks (aside from, you know, universal literacy) it’s the dream of having a secret passageway hidden behind a bookcase. Ok, maybe it just unites some of us- but there’s no denying that there’s something super-nifty about having a bookcase that moves to reveal a space only you know about. You and your builder. Anywoot! Tesla - Master of Lightning: A Weapon to End War Tesla inherited from his father a deep hatred of war. Throughout his life, he sought a technological way to end warfare. He thought that war could be converted into, "a mere spectacle of machines."

About Women on Web — Women on Web Women on Web is a digital community of women who have had abortions and individuals and organizations that support abortion rights. Women on Web is an international collective that answers thousands of help-emails every day in many languages from women around the world. As Women on Web helps women in very many countries, there is no phone number to the helpdesk, but we will respond to every email and will support you. Never hesitate to contact us at