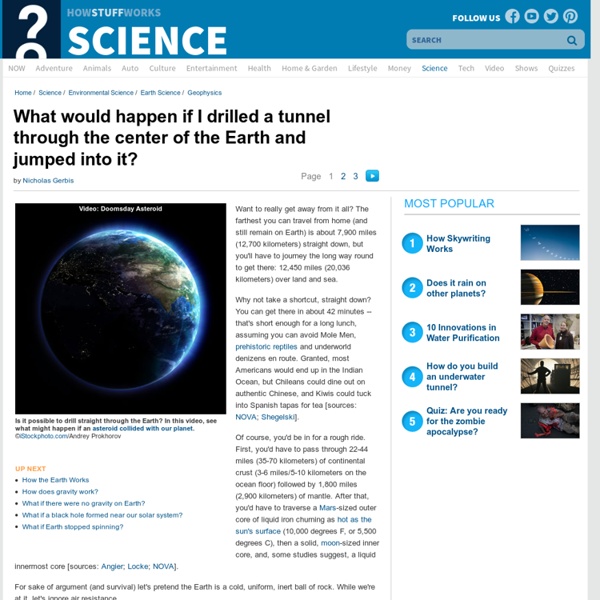 Want to really get away from it all? The farthest you can travel from home (and still remain on Earth) is about 7,900 miles (12,700 kilometers) straight down, but you'll have to journey the long way round to get there: 12,450 miles (20,036 kilometers) over land and sea. Why not take a shortcut, straight down? You can get there in about 42 minutes -- that's short enough for a long lunch, assuming you can avoid Mole Men, prehistoric reptiles and underworld denizens en route. Of course, you'd be in for a rough ride. For sake of argument (and survival) let's pretend the Earth is a cold, uniform, inert ball of rock. At the Earth's surface, gravity pulls on us at 32 feet (9.8 meters) per second squared. You're still moving at a heck of a clip, though, so don't expect to stop there. Of course, reality has a tendency to intrude on even the best thought experiments.

wow Now just up a few steps. (They are on the left in the picture) Gets a little steeper here - so put your toes in the holes. A few more steps to go. Finally in sight, the Teahouse! Click here to Watch the Cliff Hanger PPS! Click here to Watch the Cliff Hanger PPS! Dhtml Menu Navigation by Vista-Buttons.com v5.7 Seven Speaking Tips That Beat “Pretend Your Audience Is Naked" Aggh. Everyone showed up clothed! Once upon a time, I suffered from glossophobia. This affliction touches billions. I conquered it by discovering what makes people smile, nod, and listen carefully, because nothing calms you down faster than an interested audience. This is what I've learned. Children plea for them at night, and adults crave them, too. They want to be respected. This principle also underlies another rule of effective speaking: Dress like your audience, but just a little bit better." {*style:<i>Don't try to impress them. </i>*} If you truly want to help your listeners--by informing or motivating them, or improving their lives--they will care and listen. This recalls a favorite tip: We mistrust people who won't look us in the eyes--even if our eyes are among over 200 sets in a room. If you look each person in the eye for a few seconds, you make each person feel important--a feeling that every person craves. For this reason, minimize visual aids. . .

Dreams: Night School The Dream Robbers What happens when a rat stops dreaming ? In 2004, researchers at the University of Wisconsin at Madison decided to find out. Their method was simple, if a bit devilish. In this uncomfortable position, the rat is able to rest and eventually fall asleep. Step 2: After several mostly dreamless nights, the creature is subjected to a virtual decathlon of physical ordeals designed to test its survival behaviors. The dream-deprived rats flubbed each of the tasks. The surprise came during Step 3. What Dreams Are Made Of Dreaming is so basic to human existence, it's astonishing we don't understand it better. Later came the idea that dreams are the cognitive echoes of our efforts to work out conflicting emotions. "There's nothing closer to a consensus on the purpose and function of dreaming than there's ever been," says Deirdre Barrett, a Harvard psychologist and editor of the forthcoming . A Theater of Threats Dreams may do the same thing.

8 Things Everybody Ought to Know About Concentrating “Music helps me concentrate,” Mike said to me glancing briefly over his shoulder. Mike was in his room writing a paper for his U.S. History class. On his desk next to his computer sat crunched Red Bulls, empty Gatorade bottles, some extra pocket change and scattered pieces of paper. In the pocket of his sweat pants rested a blaring iPod with a chord that dangled near the floor, almost touching against his Adidas sandals. Mike made a shift about every thirty seconds between all of the above. Do you know a person like this? The Science Behind Concentration In the above account, Mike’s obviously stuck in a routine that many of us may have found ourselves in, yet in the moment we feel it’s almost an impossible routine to get out of. When we constantly multitask to get things done, we’re not multitasking, we’re rapidly shifting our attention. Phase 1: Blood Rush Alert When Mike decides to start writing his History essay, blood rushes to his anterior prefrontal cortex. Phase 2: Find and Execute

Eyes body language Techniques > Use of body language > Parts-of-the-body language > Eyes body language Up | Down | Sideways | Gazing | Glancing | Eye contact | Staring | Squinting | Blinking | Winking | Closing | Damp | Tears | Pupil size | Rubbing | See also The eyes are often called, with some justification, 'the windows of the soul' as they can send many different non-verbal signals. For reading body language this is quite useful as looking at people's eyes are a normal part of communication (whilst gazing at other parts of the body can be seen as rather rude). When a person wears dark glasses, especially indoors, this prevents others from reading their eye signals. It is consequently rather disconcerting, which is why 'gangsters' and those seeking to appear powerful sometimes wear them. Looking up When a person looks upwards they are often thinking. When they are delivering a speech or presentation, looking up may be their recalling their prepared words. Looking down Looking sideways Lateral movement Gazing

Gerard Keegan's Psychology Site: Psychology Art Psychology Art Gallery Here we have various fascinating pictures with a psychological connection. These pictures have been circling the globe via email to promote breast cancer awareness. As far as we are aware they are public domain however if you know different, please contact us immediately. How many Deer? How many Faces? How many Horses? Jigsaw Mobius ring Movement How many people? A Roman and some impossible architecture Ships - really nice Esher style work Who is the tallest? A fascinating town Two faces and more A very well done Esher style waterfall Do you find this hard to read?

The Brain—Information about the Brain 1 Introduction “I think, therefore I am.” —René Descartes, 17th-century philosopher Few of us question the crucial importance of the brain. It is vital to our existence. Our brains enable us to think, as René Descartes so skillfully pointed out nearly 400 years ago. The brain makes up only 2 percent of our body weight, but it consumes 20 percent of the oxygen we breathe and 20 percent of the energy we consume. Scientists have worked for many years to unravel the complex workings of the brain. Despite these and other significant advances in the field of brain research, most of the processes responsible for the integrated functioning of billions of brain cells remain a mystery. An essential aspect of any scientific research is communicating results to the public in a way that is easily understood. To correctly interpret the information transmitted through these venues, we need a better understanding of basic concepts related to the brain. 2 Myths and Realities about the Brain Figure 1.

Get Anyone to Like You – Instantly – Guaranteed Get anyone to like you - Instantly - Guaranteed If you want people to like you, make them feel good about themselves. This golden rule of friendship works every time - guaranteed! The principle is straightforward. If I meet you and make you feel good about yourself, you will like me and seek every opportunity to see me again to reconstitute the same good feeling you felt the first time we met. Unfortunately, this powerful technique is seldom used because we are continually focused on ourselves and not others. The simple communication techniques that follow will help you keep the focus of the conversation on the person you are talking to and make them feel good about themselves. The Big Three Our brains continually scan the environment for friend or foe signals. Eyebrow Flash The eyebrow flash is a quick up and down movement of the eyebrows. Head Tilt The head tilt is a slight tilt of the head to one side or the other. Smile A smile sends the message "I like you." Empathic Statements Example 1

Top 10 Things That Determine Happiness photo: meddygarnet Happiness is, by nature, a subjective quality with a definition like a moving target. There is scant evidence — qualitative or quantitative — to lend convincing support to those life variables most critical in determining individual happiness, which is likely why past researchers committed to the scientific method rarely tried to tackle the subject. This is changing. Take, for example, the World Database of Happiness in Rotterdam, self-described as a, “continuous register of scientific research on subjective appreciation of life.” While we’re not entirely convinced of this marriage between science and subjectivity, we can still offer up a top 10 of things that determine human happiness, as supported by this growing body of research. No.10 – Having a short memory Are you one to hold grudges? No.9 – Exacting fairness No.8 – Having lots of friendships No.7 – Being spiritual No.6 – Thinking ahead No.5 – Developing a skill According to psychology professor Dr. No.2 – Good genes