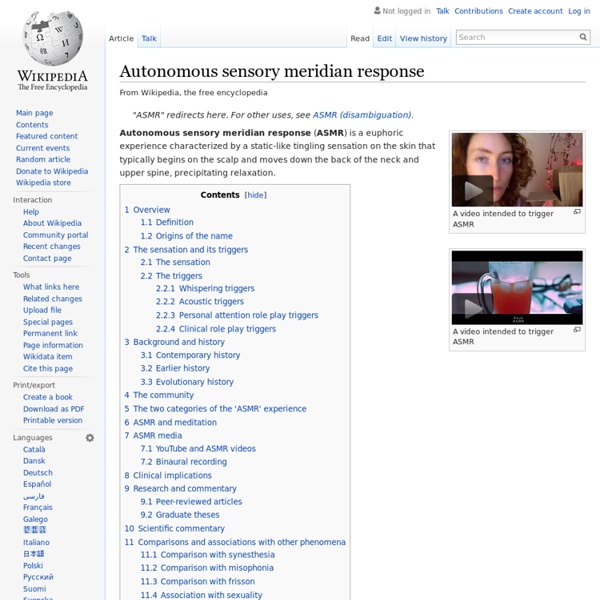 A video intended to trigger ASMR Autonomous sensory meridian response (ASMR) is a euphoric experience characterized by a static-like tingling sensation on the skin that typically begins on the scalp and moves down the back of the neck and upper spine, precipitating relaxation. Overview[edit] Definition[edit] Origins of the name[edit] The term 'autonomous sensory meridian response' (ASMR) was coined on 25 February 2010 by Jennifer Allen, a cybersecurity professional residing in New York[3] in the introduction to a Facebook Group she founded entitled the 'ASMR Group'.[4] Prior to the subsequent social consensus that led to what is now the ubiquitous adoption of that term, other names were proposed and discussed at a number of locations including the Steady Health forum, the 'Society of Sensationalists' Yahoo! Allen chose the words intending or assuming them to have the following specific meanings: The sensation and its triggers[edit] The sensation[edit] The triggers[edit] Whispering triggers[edit]

Addiction is not a disease: A neuroscientist argues that it’s time to change our minds on the roots of substance abuse The mystery of addiction — what it is, what causes it and how to end it — threads through most of our lives. Experts estimate that one in 10 Americans is dependent on alcohol and other drugs, and if we concede that behaviors like gambling, overeating and playing video games can be addictive in similar ways, it’s likely that everyone has a relative or friend who’s hooked on some form of fun to a destructive degree. But what exactly is wrong with them? For several decades now, it’s been a commonplace to say that addicts have a disease. However, the very same scientists who once seemed to back up that claim have begun tearing it down. Once, addictions were viewed as failures of character and morals, and society responded to drunks and junkies with shaming, scolding and calls for more “will power.”

LSD is good for you, say Norway researchers Tales of debilitating acid flash-backs and permanently frazzled synapses are exaggerated, according to a new scientific report which concludes LSD use may even be beneficial. "There were no significant associations between lifetime use of any psychedelics, or use of LSD in the past year, and increased rate of any of the mental health outcomes," Pål-Ørjan Johansen and Teri Krebs from the Norwegian University of Science and Technology in Trondheim concluded in their study published in the PLOS One journal on Tuesday. "Rather, in several cases psychedelic use was associated with a lower rate of mental health problems." For the study, the researchers analyzed data on the more than 130,000 Americans who took drug use surveys between 2001 and 2004, of which 22,000 had used a psychedelic drug at least once. "Everything has some risk: psychedelics can elicit temporary feelings of anxiety and confusion, but accidents leading to serious injury are extremely rare," Krebs added.

Capgras delusion The delusion most commonly occurs in patients diagnosed with paranoid schizophrenia, but has also been seen in patients suffering from brain injury[4] and dementia.[5] It presents often in individuals with a neurodegenerative disease, particularly at an older age.[6] It has also been reported as occurring in association with diabetes, hypothyroidism, and migraine attacks.[7] In one isolated case, the Capgras delusion was temporarily induced in a healthy subject by the drug ketamine.[8] It occurs more frequently in females, with a female:male ratio of approximately 3:2.[9] Signs and symptoms[edit] The following two case reports are examples of the Capgras delusion in a psychiatric setting: Diane was a 28-year-old single woman who was seen for an evaluation at a day hospital program in preparation for discharge from a psychiatric hospital. This was her third psychiatric admission in the past five years. Always shy and reclusive, Diane first became psychotic at age 23.

Continuum and the Bootstrap Paradox - The Quantum Tunnel Continuum’s present timeline seems to be littered with objects from the future. This is hardly surprising considering it is a time travel show. Objects like Kiera’s CMR, the Quantum Time Traveling Device, the drug Retrievanol better known as “Flash” and that other mysterious device whose purpose we are yet to learn all exist in a time when they should not as they have not been created. Alec Sadler (Erik Knudsen) is arguably the inventor of many of these devices. Or, at least, he will be in the future. 6 Sweet Survival Tips for Super Sensitive Souls. “I have sea foam in my veins, for I understandthe language of waves.”~ Le Testament d’Orphee Like most sensitive souls, you already know you’re sensitive. You soak up others’ moods and desires like a sponge. You absorb sensation the way a paintbrush grasps each color it touches on a palette.

Sympathetic ophthalmia Sympathetic ophthalmia (SO) is a bilateral diffuse granulomatous uveitis (a kind of inflammation) of both eyes following trauma to one eye. It can leave the patient completely blind. Symptoms may develop from days to several years after a penetrating eye injury. History[edit] Tourette syndrome Tourette syndrome (TS or simply Tourette's), is a common neuropsychiatric disorder with onset in childhood,[1] characterized by multiple motor tics and at least one vocal (phonic) tic. These tics characteristically wax and wane, can be suppressed temporarily, and are typically preceded by an unwanted urge or sensation in the affected muscles. Some common tics are eye blinking, coughing, throat clearing, sniffing, and facial movements. Tourette's does not adversely affect intelligence or life expectancy. Tourette's is defined as part of a spectrum of tic disorders, which includes provisional, transient and persistent (chronic) tics. While the exact cause is unknown, it is believed to involve a combination of genetic and environmental factors.

What Is ASMR and Why Are People Watching These Videos? On the recommendation of a colleague I put the letters “ASMR” into the search bar for You Tube. Many possible videos came up. Some of these videos had a great number of views. One had over 15 million!