Mind-Bending Medicine: An Overview of Psychedelic Substances. View the high-resolution of the infographic by clicking here. 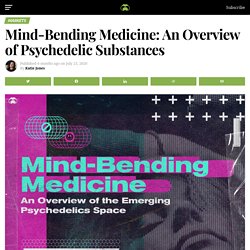 Ever since Apple and other Big Tech companies hit a market capitalization of $1 trillion, many sectors are revving to follow suit—including the automotive industry. But among those car brands racing to reach this total valuation, some are closer to the finish line than others. Ayahuasca Benefits: What Is Ayahuasca, What It Does to Your Brain. Terpsichore, Creative Commons Mice that were given ayahuasca grew new neurons that helped them excel in memory tasks. 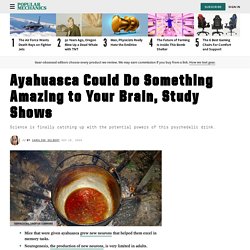 Neurogenesis, the production of new neurons, is very limited in adults.The research could have ramifications for diseases like Alzheimer's or depression. In a new study, researchers found the traditional psychoactive drug ayahuasca stimulates the growth of new brain cells in the hippocampi of research mice. The hippocampus is responsible for many memory functions, and the mice dosed with ayahuasca also performed better in a battery of memory tests. Dive deeper. What is Neurohacking? The term ‘hacker’ has its origins in computer programming subcultures from the ‘60s, and was used to describe people who wanted to take on hard problems in a spirit of playful exploration and a resistance to ‘unearned’ authority. 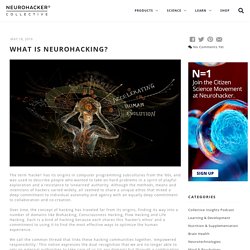 Although the methods, means and intentions of hackers varied widely, all seemed to share a unique ethos that mixed a deep commitment to individual autonomy and agency with an equally deep commitment to collaboration and co-creation. Breakthrough psilocybin study uncovers neurochemical origins of human ego. Impressive new research, led by scientists from Maastricht University in the Netherlands, has uncovered a new neurochemical mechanism by which psilocybin generates its hallucinogenic effects. 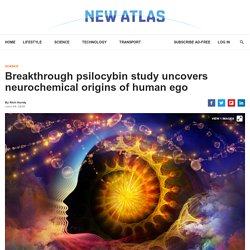 The research also revealed a direct relationship between a psychedelically-induced subjective sense of ego dissolution and this particular neurochemical process. New Atlas spoke to Natasha Mason, lead author on the new study, to learn more. The death of the ego A rapidly growing body of evidence is being generated by researchers all over the world supporting the therapeutic benefits of psychedelic compounds. Psychedelic research on microdosing rats with DMT reveals unusual results. Psychedelic microdosing effects fail to match expectations in new study. LSD Changes Something About The Way You Perceive Time. Shayla Love in Tonic: In 2015, when cognitive neuroscientist Devin Terhune was hit by a car, the impact took less than a second, but he felt it to be much longer. 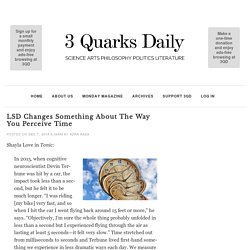 “I was riding [my bike] very fast, and so when I hit the car I went flying back around 15 feet or more,” he says. “Objectively, I’m sure the whole thing probably unfolded in less than a second but I experienced flying through the air as lasting at least 5 seconds—it felt very slow.” Time stretched out from milliseconds to seconds and Terhune lived first-hand something we experience in less dramatic ways each day. We measure time in set amounts— seconds, minutes, and hours. ‘It can rewire people’s brains’: how traumatised veterans turned to underground MDMA therapy. The scene, at first, seems to be of two mates reminiscing about the good old days. 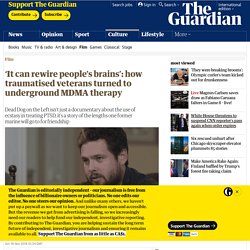 Relaxing on the porch with a beer, tattoos poking out from under his shirt sleeves, Tyler Flanigan roundly mocks his fellow former marine Nigel McCourry. “Remember that first patrol we went on, outside the gate, when we went into Condition One?” Breakthrough study reveals how LSD dissolves a person's sense of self. A fascinating study led by scientists at the University of Zurich has uncovered key insights into the mechanisms behind how our brain generates our sense of self. 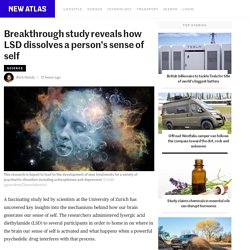 The researchers administered lysergic acid diethylamide (LSD) to several participants in order to home in on where in the brain our sense of self is activated and what happens when a powerful psychedelic drug interferes with that process. The fundamental goal of the research was to better understand the neurological and pharmacological mechanisms behind the brain's construction of its sense of self. With this knowledge scientists can subsequently hope to develop new treatments for psychiatric disorders that stem from fundamental distortions of that sense of self, including schizophrenia or depression. Untitled. — from Alternet Listening to Jimi Hendrix on acid back in the day was absolutely mind-melting. 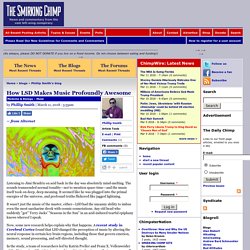 The sounds transcended normal tonality—not to mention space-time—and the music itself took on deep, deep meaning. Theonion. LSD is good for you, say Norway researchers. Tales of debilitating acid flash-backs and permanently frazzled synapses are exaggerated, according to a new scientific report which concludes LSD use may even be beneficial. 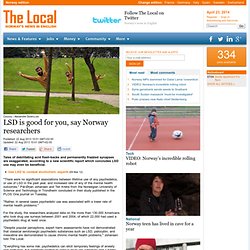 "There were no significant associations between lifetime use of any psychedelics, or use of LSD in the past year, and increased rate of any of the mental health outcomes," Pål-Ørjan Johansen and Teri Krebs from the Norwegian University of Science and Technology in Trondheim concluded in their study published in the PLOS One journal on Tuesday.

"Rather, in several cases psychedelic use was associated with a lower rate of mental health problems. " For the study, the researchers analyzed data on the more than 130,000 Americans who took drug use surveys between 2001 and 2004, of which 22,000 had used a psychedelic drug at least once. "Everything has some risk: psychedelics can elicit temporary feelings of anxiety and confusion, but accidents leading to serious injury are extremely rare," Krebs added. Autonomous sensory meridian response. A video intended to trigger ASMR Autonomous sensory meridian response (ASMR) is a euphoric experience characterized by a static-like tingling sensation on the skin that typically begins on the scalp and moves down the back of the neck and upper spine, precipitating relaxation. 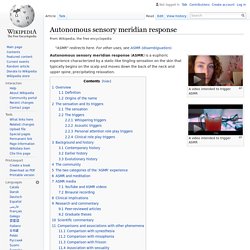 Overview[edit] Definition[edit] Origins of the name[edit] Agrostis: Tryptamines in the Crucible of Civilization - The Nexian. By Morris Crowley on Friday, 04 April 2014, hits: 6805 The ancient Greek world was familiar with a wide variety of drugs... but is it possible that they used DMT and related tryptamines as well? Manufacturing Madness: The Pseudoscience of Modern Psychiatry. LSD's impact on the brain revealed in groundbreaking images. The profound impact of LSD on the brain has been laid bare by the first modern scans of people high on the drug. The images, taken from volunteers who agreed to take a trip in the name of science, have given researchers an unprecedented insight into the neural basis for effects produced by one of the most powerful drugs ever created.

A dose of the psychedelic substance – injected rather than dropped – unleashed a wave of changes that altered activity and connectivity across the brain. Evidence Builds for Medicinal Use of Psychedelic Drugs. A single traumatic experience is enough to rattle people hard, but it rarely takes them down. In the face of subsequent ordeals, however, we become more vulnerable: a new study suggests that a second trauma has a critical role in leading to posttraumatic stress disorder, a condition that can include flashbacks, nightmares and intense anxiety, enough to disrupt a person's life. When scientists gave rats one painful electric shock, the rodents' memories and stress response temporarily became blunted but returned to normal as expected.

But after a second unpredictable harrowing experience, the animals began to show fear and anxiety similar to what is seen in people with posttraumatic stress disorder (PTSD). "Having repeated traumatic experiences is likely a critical factor for the development of posttraumatic stress disorder," said coauthor Cristina Alberini, a neuroscientist at New York University. The stress curve (image) How LSD Microdosing Became the Hot New Business Trip.

Let's call him "Ken. " Ken is 25, has a master's degree from Stanford and works for a tech startup in San Francisco, doing a little bit of everything: hardware and software design, sales and business development. Recently, he has discovered a new way to enhance his productivity and creativity, and it's not Five Hour Energy or meditation. Ken is one of a growing number of professionals who enjoy taking "microdoses" of psychedelics – in his free time and, occasionally, at the office. "I had an epic time," he says at the end of one such day. DMT – A Tool to Extend Survival in Clinical Death? Via Indiegogo Imagine your loved one underwent a heart attack, suffered a stroke, lays in coma after an accident, or got electrocuted while changing a light bulb and the doctors are telling you they wish if they had more time to save their life. Nothing Medicinal About Marijuana (Unless it is 100% Organic)

Cannabis: The Healing Herb - The Nexian. Magic Mushrooms and Natural Intelligence. In a time when Artificial Intelligence is getting all the headlines, English author and film-maker Simon G. Powell is making the case for Natural Intelligence – the idea that life itself is intelligent and nature has solutions to problems we have yet to even understand. Ibogaine For Sale. Scientists Studied What Psychedelics Do to the Brain, and It's Not What You've Been Told. The Ketamine Key. Magic Mushrooms Create a Hyperconnected Brain.

What We Really Know About Psychedelic Mushrooms. Ayahuasca Can Help You Communicate with Plant Spirits, and Heal Your Body and Mind. Psychedelic Researcher: How Drugs Like LSD Can Change Your Life. Your Brain on Shrooms. Ecstasy and Acid in Your Medicine Cabinet? Doctors Explore Psychedelics. Could Psilocybin Be the Next Caffeine? A Microdosing Report. Is LSD about to return to polite society? Clinical Trial Approved for MDMA Psychotherapy.