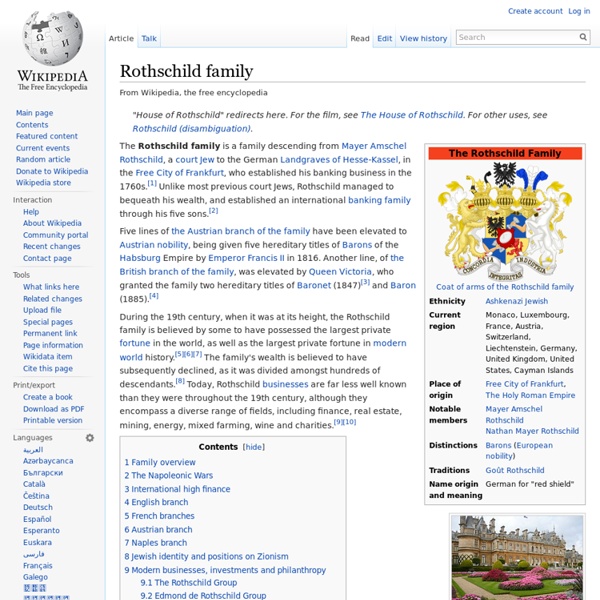 A house formerly belonging to the Viennese branch of the family (Schillersdorf Palace). Schloss Hinterleiten, one of the many palaces built by the Austrian Rothschild dynasty. Donated to charity by the family in 1905. Beatrice de Rothschild's villa on the Côte d'Azur, France The Rothschild family is a family descending from Mayer Amschel Rothschild, a court Jew to the German Landgraves of Hesse-Kassel, in the Free City of Frankfurt, who established his banking business in the 1760s.[1] Unlike most previous court Jews, Rothschild managed to bequeath his wealth, and established an international banking family through his five sons.[2] Five lines of the Austrian branch of the family have been elevated to Austrian nobility, being given five hereditary titles of Barons of the Habsburg Empire by Emperor Francis II in 1816. Family overview[edit] The first member of the family who was known to use the name "Rothschild" was Izaak Elchanan Rothschild, born in 1577. Families by country: Wine[edit]

J. P. Morgan John Pierpont "J. P." Morgan (April 17, 1837 – March 31, 1913) was an American financier, banker, philanthropist and art collector who dominated corporate finance and industrial consolidation during his time. In 1892 Morgan arranged the merger of Edison General Electric and Thomson-Houston Electric Company to form General Electric. After financing the creation of the Federal Steel Company, he merged in 1901 with the Carnegie Steel Company and several other steel and iron businesses, including Consolidated Steel and Wire Company owned by William Edenborn, to form the United States Steel Corporation. Morgan died in Rome, Italy, in his sleep in 1913 at the age of 75, leaving his fortune and business to his son, John Pierpont "Jack" Morgan, Jr., and bequeathing his mansion and large book collections to The Morgan Library & Museum in New York. Childhood and education[edit] J. Career[edit] Early years and life[edit] J. J.P. After the 1893 death of Anthony Drexel, the firm was rechristened "J.

The Money Masters Bank for International Settlements The Bank for International Settlements (BIS) is an international financial institution[2] owned by central banks which "fosters international monetary and financial cooperation and serves as a bank for central banks".[3] The BIS carries out its work through its meetings, programmes and through the Basel Process – hosting international groups pursuing global financial stability and facilitating their interaction. It also provides banking services, but only to central banks and other international organizations. It is based in Basel, Switzerland, with representative offices in Hong Kong and Mexico City. History[edit] BIS main building in Basel, Switzerland The BIS was established in 1930 by an intergovernmental agreement between Germany, Belgium, France, the United Kingdom, Italy, Japan, the United States, and Switzerland.[4][5] It opened its doors in Basel, Switzerland, on 17 May 1930. The BIS's original task of facilitating World War I reparation payments quickly became obsolete.

International Monetary Fund The International Monetary Fund (IMF) is an international organization headquartered in Washington, D.C., of "188 countries working to foster global monetary cooperation, secure financial stability, facilitate international trade, promote high employment and sustainable economic growth, and reduce poverty around the world."[1] Formed in 1944 at the Bretton Woods Conference, it came into formal existence in 1945 with 29 member countries and the goal of reconstructing the international payment system. Functions[edit] According to the IMF itself, it works to foster global growth and economic stability by providing policy, advice and financing to members, by working with developing nations to help them achieve macroeconomic stability and reduce poverty.[8] The rationale for this is that private international capital markets function imperfectly and many countries have limited access to financial markets. The IMF's role was fundamentally altered by the floating exchange rates post-1971.