The Git solution for professional teams 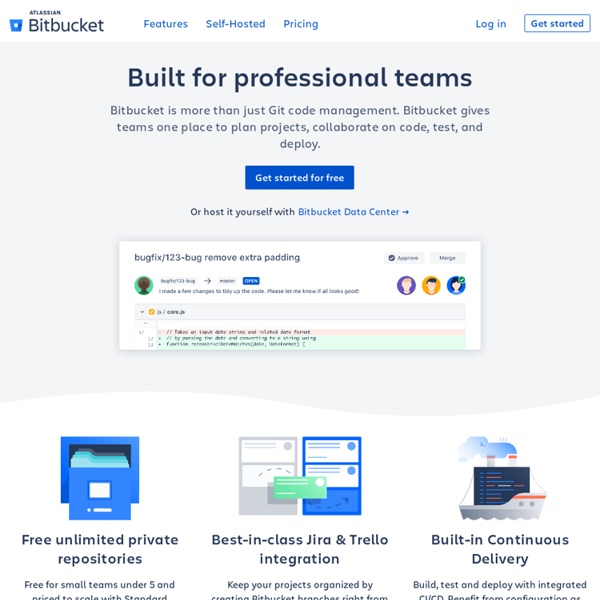 About gists Gists are a great way to share your work. You can share single files, parts of files, or full applications. You can access gists at Every gist is a Git repository, which means that it can be forked and cloned. The gist editor is powered by CodeMirror. Types of gists Sage - Tour Sage is built out of nearly 100 open-source packages and features a unified interface. Sage can be used to study elementary and advanced, pure and applied mathematics. This includes a huge range of mathematics, including basic algebra, calculus, elementary to very advanced number theory, cryptography, numerical computation, commutative algebra, group theory, combinatorics, graph theory, exact linear algebra and much more. It combines various software packages and seamlessly integrates their functionality into a common experience. It is well-suited for education and research.

The Bazaar version control system enters beta for version 2.4 29 March 2011, 16:32 The Bazaar developers have announced the first beta of the new 2.4 series. The developers are planning a release in August 2011 (according to the milestones page; the announcement incorrectly says 2012). Bazzaar, or bzr as the command line tool is named, is a distributed version control system (VCS) that can work with or without a central server; both Launchpad.net and SourceForge offer Bazaar support for projects.

Git FAQ What is Git? Git is a distributed version control system developed by Junio Hamano and Linus Torvalds. Git does not use a centralized server. Git runs on Linux, BSD, Solaris, Darwin, Windows, Android and other operating systems. GitConcepts Git is a very popular DistributedSCM that works very similarly to Mercurial. However, there are some design and conceptual differences that may cause trouble when coming from Git to Mercurial. This text refers to Mercurial v1.8 and Git v1.7.4. What is Unified Modeling Language (UML)? UML, short for Unified Modeling Language, is a standardized modeling language consisting of an integrated set of diagrams, developed to help system and software developers for specifying, visualizing, constructing, and documenting the artifacts of software systems, as well as for business modeling and other non-software systems. The UML represents a collection of best engineering practices that have proven successful in the modeling of large and complex systems. The UML is a very important part of developing object oriented software and the software development process. The UML uses mostly graphical notations to express the design of software projects. Using the UML helps project teams communicate, explore potential designs, and validate the architectural design of the software. In this article we will give you detailed ideas about what is UML, the history of UML and a description of each UML diagram type, along with UML examples.

How We Build Features x Access to videos, talks, and worksheetsInvitation to private Google Plus CommunityJoin in on live Q&A webinars and fireside chats Software - Subversive "I am in charge of integrating Zend Studio for Eclipse with SVN. After evaluating several alternatives and talking to developers in the Eclipse community, we concluded that Subversive is the most suitable solution for us. I had several interactions with the Subversive team which was very responsive... After deploying the SVN integration within Zend Studio For Eclipse we received many great feedbacks from customers."

Git User’s Manual (for version 1.5.3 or newer) This chapter covers internal details of the Git implementation which probably only Git developers need to understand. A birds-eye view of Git’s source code It is not always easy for new developers to find their way through Git’s source code. This section gives you a little guidance to show where to start. OS X Command Line - Sublime Text 2 Documentation Contents Overview Sublime Text 2 includes a command line tool, subl, to work with files on the command line.