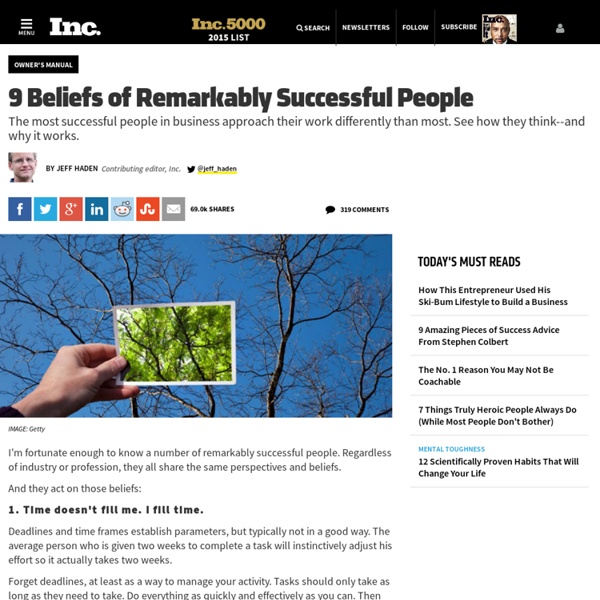 I'm fortunate enough to know a number of remarkably successful people. Regardless of industry or profession, they all share the same perspectives and beliefs. And they act on those beliefs: 1. Time doesn't fill me. I fill time. Deadlines and time frames establish parameters, but typically not in a good way. Forget deadlines, at least as a way to manage your activity. Average people allow time to impose its will on them; remarkable people impose their will on their time. 2. Some of your employees drive you nuts. You chose them. Think about the type of people you want to work with. Then change what you do so you can start attracting those people. Successful people are naturally drawn to successful people. 3. Dues aren't paid, past tense. No matter what you've done or accomplished in the past, you're never too good to roll up your sleeves, get dirty, and do the grunt work. Remarkably successful people never feel entitled--except to the fruits of their labor. 4. 5. Ask them why they failed. 6.

10 Ways You Should Never Describe Yourself Picture this: You meet someone new. "What do you do?" he asks. "I'm an architect," you say. "Oh, really?" he answers. Two Lists You Should Look at Every Morning - Peter Bregman by Peter Bregman | 11:00 AM May 27, 2009 I was late for my meeting with the CEO of a technology company and I was emailing him from my iPhone as I walked onto the elevator in his company’s office building. I stayed focused on the screen as I rode to the sixth floor. I was still typing with my thumbs when the elevator doors opened and I walked out without looking up. Then I heard a voice behind me, “Wrong floor.”

6 Habits of True Strategic Thinkers In the beginning, there was just you and your partners. You did every job. You coded, you met with investors, you emptied the trash and phoned in the midnight pizza. Now you have others to do all that and it's time for you to "be strategic." Make Something People Love: Lessons From a Startup Guy So, you want to learn how to make a product people love—that’s great! But stop right there. Before you can make something people love, you have to make something people want . . . Entrepreneur Demographics: Who's an Entrepreneur Now? As U.S. entrepreneurship has grown over the last 15 years, entrepreneurs themselves have changed as well. Among the shifts: Entrepreneurs today tend to be more male, and more educated, than in the mid-1990s. Rasmussen College has compiled data from Kauffman Foundation--an organization that studies entrepreneurship--and turned to Column Five to represent the information in the below graphic.

Make a Great First Impression: 7 Smart Tricks Research shows that customers decide whether or not they want to work with you within two seconds of meeting you face to face. That puts the burden on you to make certain that those two seconds really count. The only way to do that is to prepare ahead of time. These tricks may help. 1. Keep Yourself Fit

Life Lessons From Benjamin Franklin Benjamin Franklin was a man of action. Over his lifetime, his curiosity and passion fueled a diverse range of interests. He was a writer (often using a pseudonym), publisher, diplomat, inventor and one of the Founding Fathers of the United States. His inventions included the lightning rod, bifocals and the Franklin stove. Franklin was responsible for establishing the first public library, organizing fire fighters in Philadelphia, was one of the early supporters of mutual insurance and crossed the Atlantic eight times.

Boost Your Brain Power: A Simple Exercise Sure, exercise is good for your health. We all know that. But exercise is also a scientifically proven way to make yourself smarter. According to Gretchen Reynolds, author of the soon to be released The First 20 Minutes, a book about the science of exercise, recent research shows that exercise can help your brain resist physical shrinkage and improve cognitive flexibility.

Silicon Valley's gender gap handicap (Sol Tzvi, founder of Genieo, based in Israel.) Silicon Valley is running hard to maintain its position as the global innovation engine, against competition with dozens of fast growing innovation centers around the world. Which is why it's puzzling that Silicon Valley has such a large gender gap in key sectors such as angels, VCs, entrepreneurs, engineers, and in senior executive roles. Social Media Marketing Mistake Every Small Business Makes You constantly extend your virtual handshake in every possible direction... yet no one embraces it. Very few people follow, connect, or "like" you. Why? Simple: You're looking in the wrong mirror. This is the fourth in my series where I choose a topic, pick someone smarter than me (finding smarter people is turning out to be way easier than my ego prefers), and we trade emails.

The Link Between Quietness And Productivity Some of you may have tried to reach me this morning and found that I was unavailable. That’s because I was knee high in muck with my husband and some friends. We were out having what I call clamming wars, here on Cape Cod.

St. Clement’s drizzle cake Not everything in life turns out the way we expect it be and to me understanding that is part of growing up – learning to deal with deception and disappointment may not be a pleasant thing to do but it is certainly necessary. And exactly because of that I find it wonderful when something I expected to be great actually is, even little things like a good movie or a good book. My hopes were high for “Skyfall” and the movie fit the bill perfectly – Daniel Craig has proved once more that he can play the part infinitely better than Brosnan, Javier Bardem delivers another great villain (Joel and Ethan Coen knew what they were doing!) and Sam Mendes is as talented directing an action movie as he is directing drama. Coincidently, a couple of days before I watched “Skyfall” Rachel Allen’s gorgeous book on cakes arrived, and that was another highlight of my week: the book is absolutely beautiful, packed with delicious recipes, and this citrusy and very moist cake is one of them.