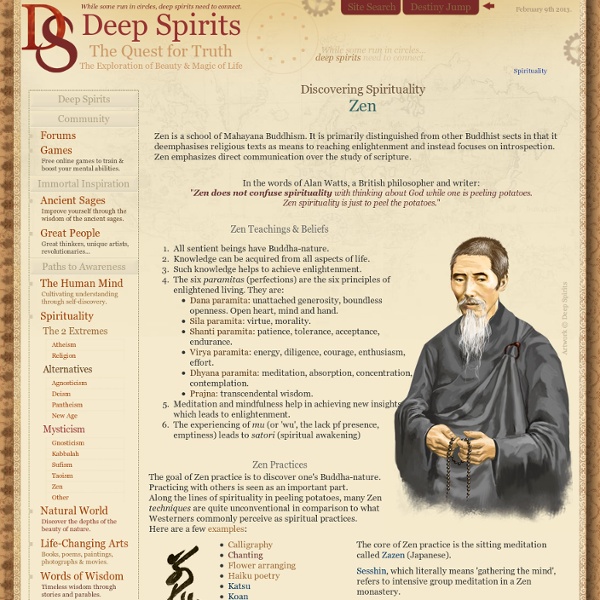 Spirit Vaults : Meditation - Essay - StumbleUpon It seems everyone is interested in meditation...talking about the wonderful benefits, recommending classes and discussing the different ways to "do it". But, for a beginner, just what is "it"? And how do you do "it"? Our busy, hectic, lifestyles may seem to prohibit this peaceful practice, or provide a convenient "excuse" not to begin, or continue, to meditate...but, the happy news is, you CAN successfully benefit even if you practice for short periods. With the simple technique described below, you will begin and incredible journey. There are 100's of styles, traditions and forms of meditation, but this simple practice has always been highly recommended. Sit comfortably, preferably upright and alert. To sit on a mat, cushion or pillow, sit cross-legged, half or full lotus, depending on your ability. You may close your eyes (unless this causes you to fall asleep) or gaze with almost-closed eyes as if looking downward and inward.

Taoism The word Tao means path or way, although the original meaning in Chinese philosophy and religion is more abstract. Behind all material things and all the change in the world lies one fundamental, universal principle which is the Way or Tao. This principle governs everything, all change and all life. "Beyond the gate of experience flows the Way, Which is ever greater and more subtle than the world." From the Tao Te Ching Major Taoist Scriptures The Tao Te Ching written by Lao Tzu. "The Way that can be experienced is not true; The world that can be constructed is not real." Zhuangzi, written by the same name sage is a book of prose, poetry, humor and disputation. The Daozang or Treasury of Tao is considered as the Taoist canon. Teachings & Beliefs Tao is the flow of the universe, the force behind the natural order that keeps the universe balanced and ordered. P'u is a passive state of receptiveness, state of perception without prejudice. Taoist Practices Lao Tzu

The Five Varieties of Zen An old Zen student called Hsiang-yen went to dokusan with Kuei-shan Ling-yu (771-853), the T'ang dynasty master, and Kuei-shan gave him a koan, of which over and over he was unable to see into it's mysteries. Hsiang-yen decided that it was all too much for him and he would surrender. He went away and found a sacred site, the grave of the Sixth Patriarch of Chinese Zen, Hui-neng, and maintained it as a shrine. Day in and day out he had no thought about the world except his sweeping. Then one day, sweeping away, he swept a pebble into a bamboo grove beside the shrine. Among the various types of Zen presented to the people of today there are some which are profound and some shallow, some that lead to Enlightenment and some that do not. (PLEASE CLICK) GASSHO(PLEASE CLICK)CLICK HERE FOR ENLIGHTENMENT ON THE RAZOR'S EDGE Source: "The Three Pillars of Zen", Kapleau, Roshi Phillip, pgs.44-52.

Japanese Zen Buddhist Philosophy 1. The Meaning of the Term Zen The designation of this school of the Buddha-Way as Zen, which means sitting meditation, is derived from a transliteration of the Chinese word Chán. 2. There are basically two methods utilized in meditation practice in Zen Buddhism to assist the practitioner to reach the above-mentioned goals, together with a simple breathing exercise known as “observation of breath count” (sūsokukan); one is the kōan method and the other is called “just sitting” (shikan taza), a form of “single act samādhi.” According to Hakuin (1685–1768), who systematized kōans, there are formally seventeen hundred cases of kōans, and if sub-questions are added to them, a total number of cases comprising the system would be roughly three thousand. On the other hand, the Sōtō school, of which Dōgen (1200–54) is the founder, does not rely on an elaborate kōan system to learn to become a Zen person, but instead follows a method called “just sitting” (shikan taza). 3. 4. 5. 6. 7. 8. 9.

Study Shows Meditation Changes Brain Structure in Just 8 Weeks - Family... Written by Suzannah Moss - FHG Senior Writer Participants in an 8 week mindfulness meditation class experienced structural brain changes including increased grey-matter density in the hippocampus, known to be important for learning and memory, and in structures associated with self-awareness, compassion and introspection. This is the first research to document meditation-produced changes in the brain. Previous research has identified differences in brain activity and structure between practised meditators and non-meditators. Researchers noted that long-term meditation alters brain-wave patterns, with greater activity in brain circuits involved in attention. The current study is the first to document that these structural changes are in fact produced by meditation. During the study MR images of participants' brain structure were taken two weeks prior to and immediately following an eight week mindfulness based stress reduction programme. Further health benefits of meditation References: